Hashtag Life visited Belgium with Heineken, for 72 hours around it’s top cities, before unwinding to perfect hospitality at the Heineken Paddock Club, to watch the Formula 1 Races at Spa Francochamps

As major partners of F1 Heineken are bringing a fresh perspective to host cities, showcasing there is more than a race to a Grand Prix weekend. Search #HeinekenF1 or visit www.heineken.com for more info

Accelerating to 100mph and then back to zero in just 4 seconds, is not something the average blood pressure can survive. The same can be said for a whirlwind experience behind the eyes of multinational brand Heineken, whose current sponsorship of the 7 decade strong mega-sport has birthed one of the most immersive experiences around the Formula 1 – the 72 Hours Campaign.

Spanning five races annually the Heineken 72 Hour Trips scale each F1 host destination for the best of their underground culture, heritage and identity, before treating their guests to an unforgettable VIP experience at their Paddock Club on race day.

Hashtag Life was able to experience the campaign first-hand, with, of course, a Heineken in hand, at all times!

The 72 Hour Campaign in Belgium behind what is widely acknowledged to be Formula 1’s most preferred race track, dove into the culture of Antwerp and Brussels before visiting Spa itself for the race-day finals.

Antwerp can best be described as  ‘pleasantville’ – a beautiful pace encompasses the city, and everything within its main quarters feels elegant and well-groomed. Heineken introduced us to The Jane – rumoured as Antwerp’s, and possibly even Beglium’s best restaurant with 2 Michelin Stars to its name. With a usual 3 month waiting list (think, The Fat Duck, in the UK) for acknowledgement at the very least, we were welcomed in seamlessly as we stepped into the once Chapel of the Belgian Military Hospital, and architectural beauty, which has been much preserved in its transformation to gastronomic hotspot. We ascended to the top floor – the Upper Room – where we watch an open-bar of mixologists tamper their magic. Below us, an open plan dining hall lies beneath an illuminated art-installation which doubles as a chandelier. The dishes we are treated to are at the Chef’s choice, and included oysters cooked three ways, larger-than-life langoustine flame-grilled a la gigantic blow torch right before your eyes, and an incredibly soft chimichurried wagyu beef. 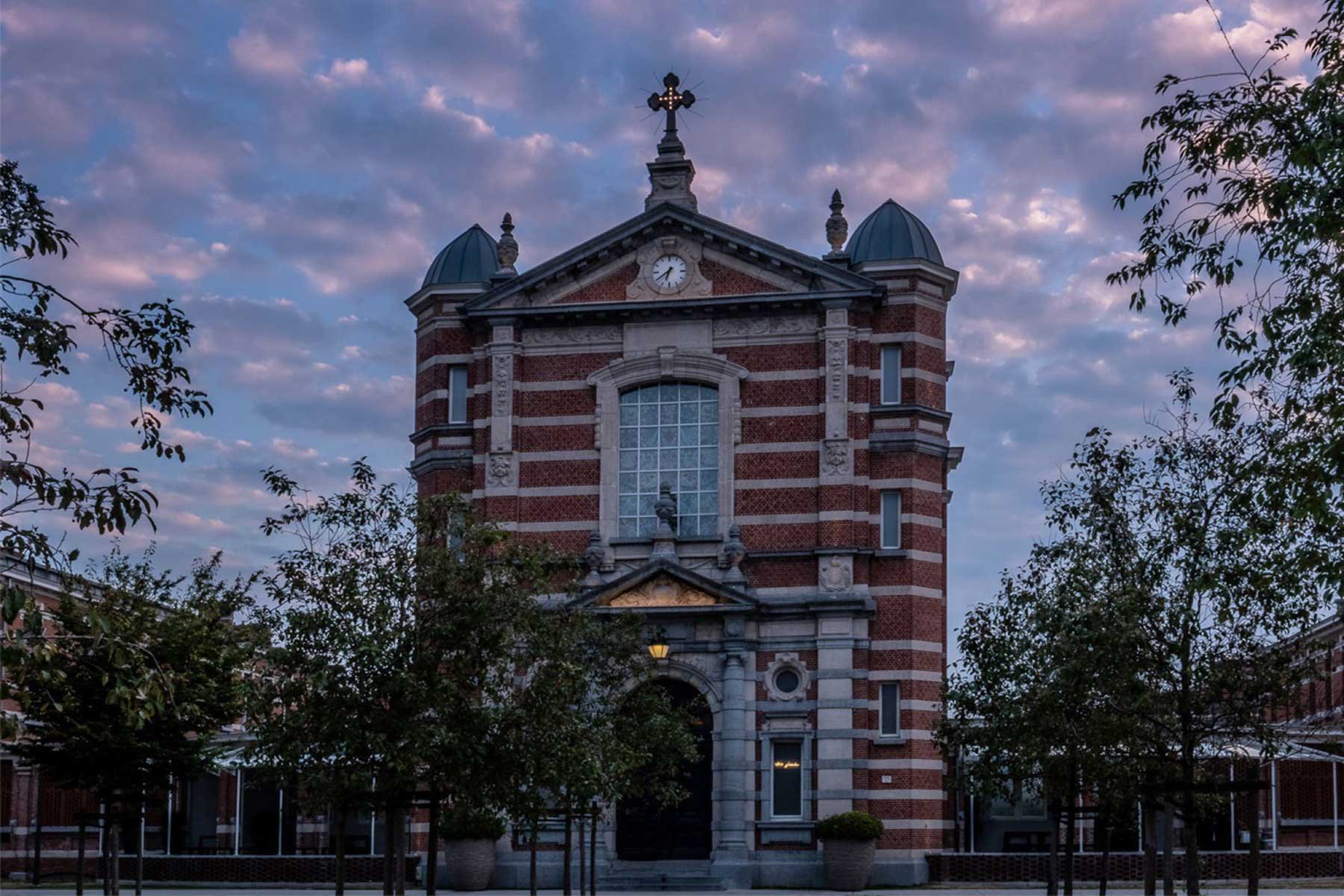 To burn off the meal, Heineken next put us to a walking tour of Antwerp – and by extension Belgium’s – Comic Book history as I discovered that some of my favourite cartoon characters such were rooted in Belgian Culture. Famous streets serve as murals to household comics and characters such as ‘The Kikiboos’ – Belgium’s answer to the Simpsons encompass both a familial and cultural identity and narrative, for children and adults alike, across the country. And for foreigners like us, childhood memories were reminisced back into existence through street-murals of the Smurfs and of course the Adventures of Tintin. 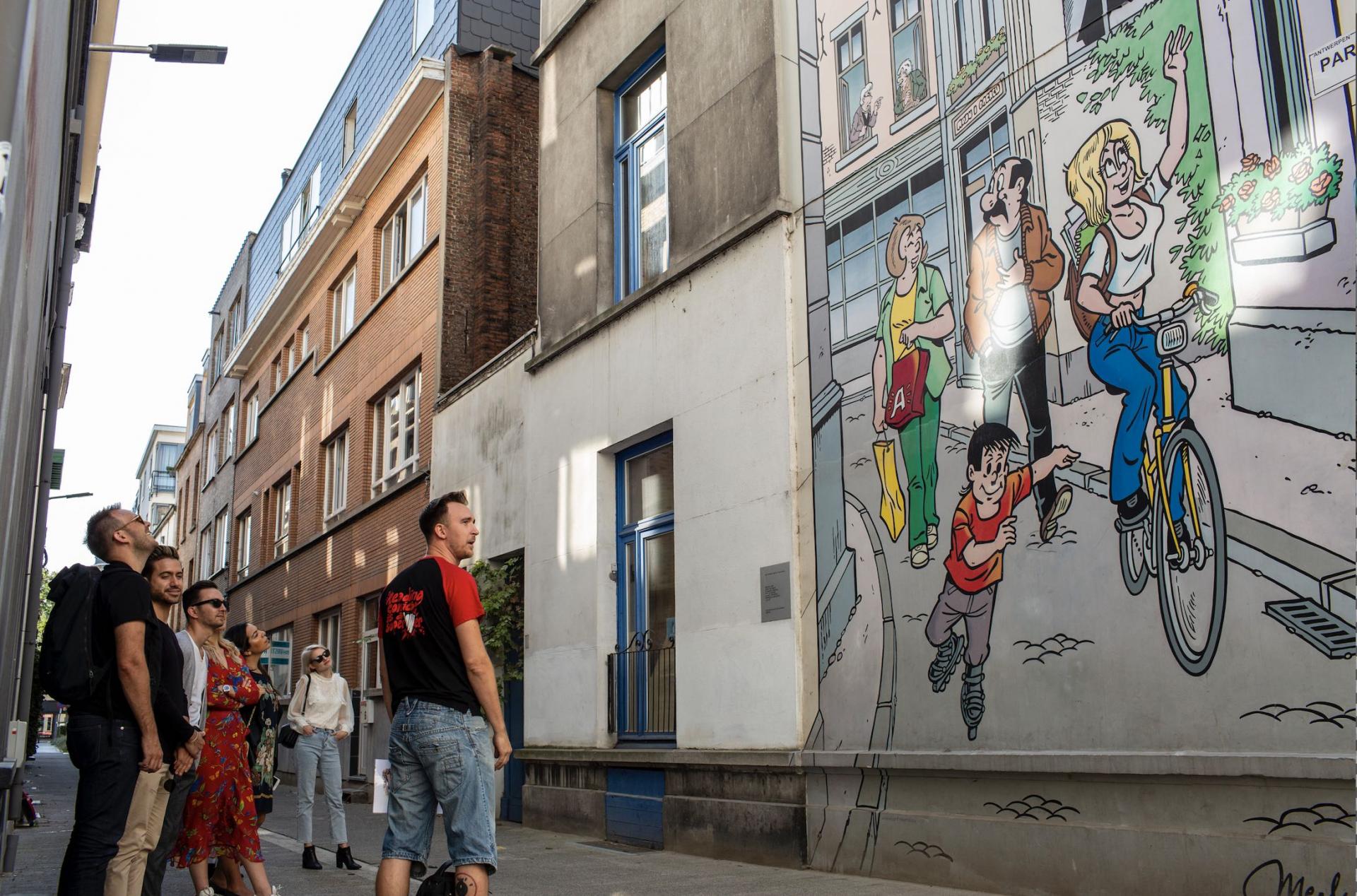 I’m pretty sure that when anyone says “Belgian” the default answer is “Chocolate.” And that is exactly what Heineken set its sights on for the quintessential whistle stop tour around Brussels. A chocolate workshop had us whisking up creamy, temperature-controlled Belgian pralines, and putting both our culinary and design skills to the test. Hint: there is in fact such a thing as enough chocolate oncer you’ve inhaled the aromas of pure cacao for 3 consecutive hours, but this was as authentic a Chocolate experience as you’ll find in Belgium. 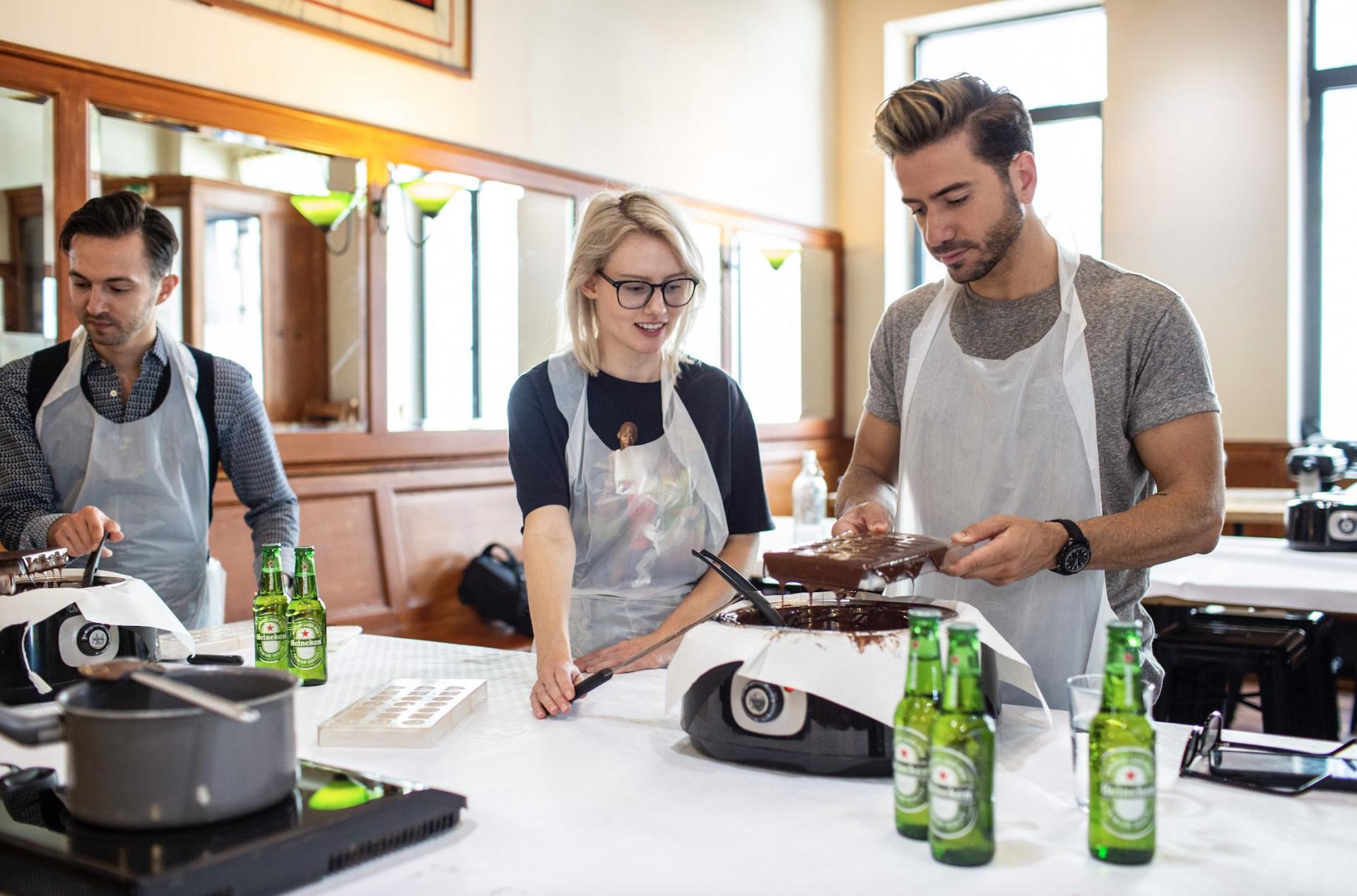 Our next and last culture-stop involved unleashing our inner musicians at Sonhouse – a leading recording studio in Belgium in an urban space and reformed milk factory whose interiors and design instantly reminded us upon arrival, that we were definitely not cool enough to be there. We were welcomed in nonetheless to spend an hour amidst some of Brussel’s finest jazz musicians, soaking in their sounds and incredible capacity for bluesy improvisation. Shortly after we were put to the test to practice our own improv skills, as we played around with a deck of Formula 1 Race Day sounds, including the latest Heineken advertising slogan,  “When You Drive, Never Drink” promoting Heineken’s new alcohol free “0.0” beer, which echoed seductively over a backdrop of smooth jazz sounds. Whilst the track we  journalists composed will not be hitting a billboard chart near you any time soon, it was a wonderful way to soak in some beautiful sounds ahead of race day, whilst soaking up some freshly chilled Heinekens.

Race day itself was amass with a different sonic backdrop – a roar of eager fans awaiting their champion in the longest race-track of the Formula 1 series, at Spa Francochamps. A melancholy hum hovered along with the anticipation, following the tragic crash and passing of Formula 2  racer Antoine Hubert only the day before, and a heavy hearted silence was observed in his memory and honour ahead of the races starting. 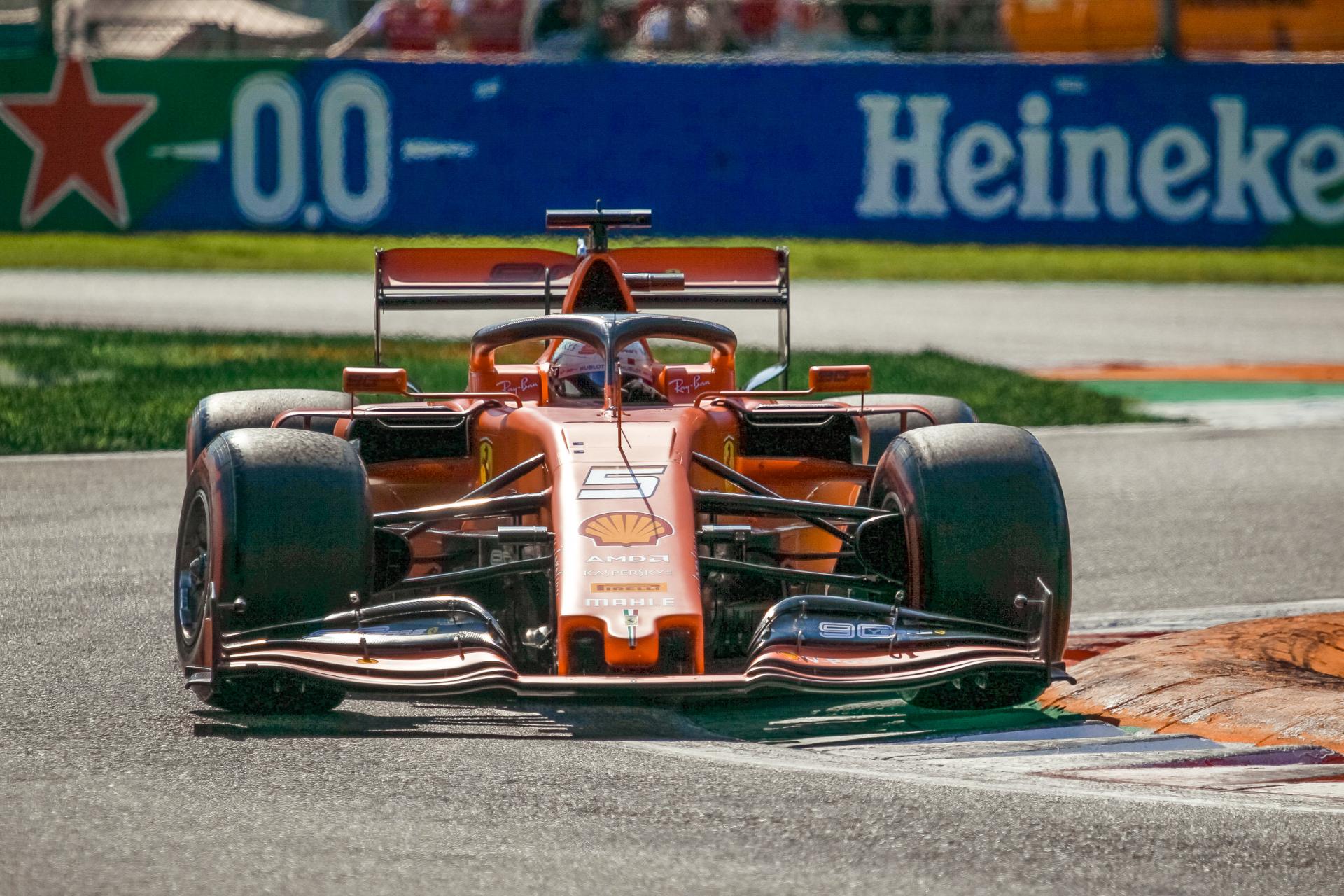 The Heineken Paddock Club, where our hospitality experience was hosted, boasted enviable views both within and outside of the club. Following a track tour which witnessed fully piled stands of Verstappen fans, who quickly disappointed by the first lap, Heineken guests, including ambassador and ex-world champion Sir Jackie Stewart, took to the club’s viewing terraces – rumoured to have the best trackside views, overlooking some of the toughest hills and corners of the race – to watch the drivers tackle the track’s undulating profile and scenic backdrops of hills and conifer forests. The contrast between the classic, calm views and the cars reverberating roars throws its guests into an alternate decade – a time past, which reminisces Formula 1’s classical beginnings, but sharply attunes viewers, drivers, and their teams, to today’s cutting-edge technology. 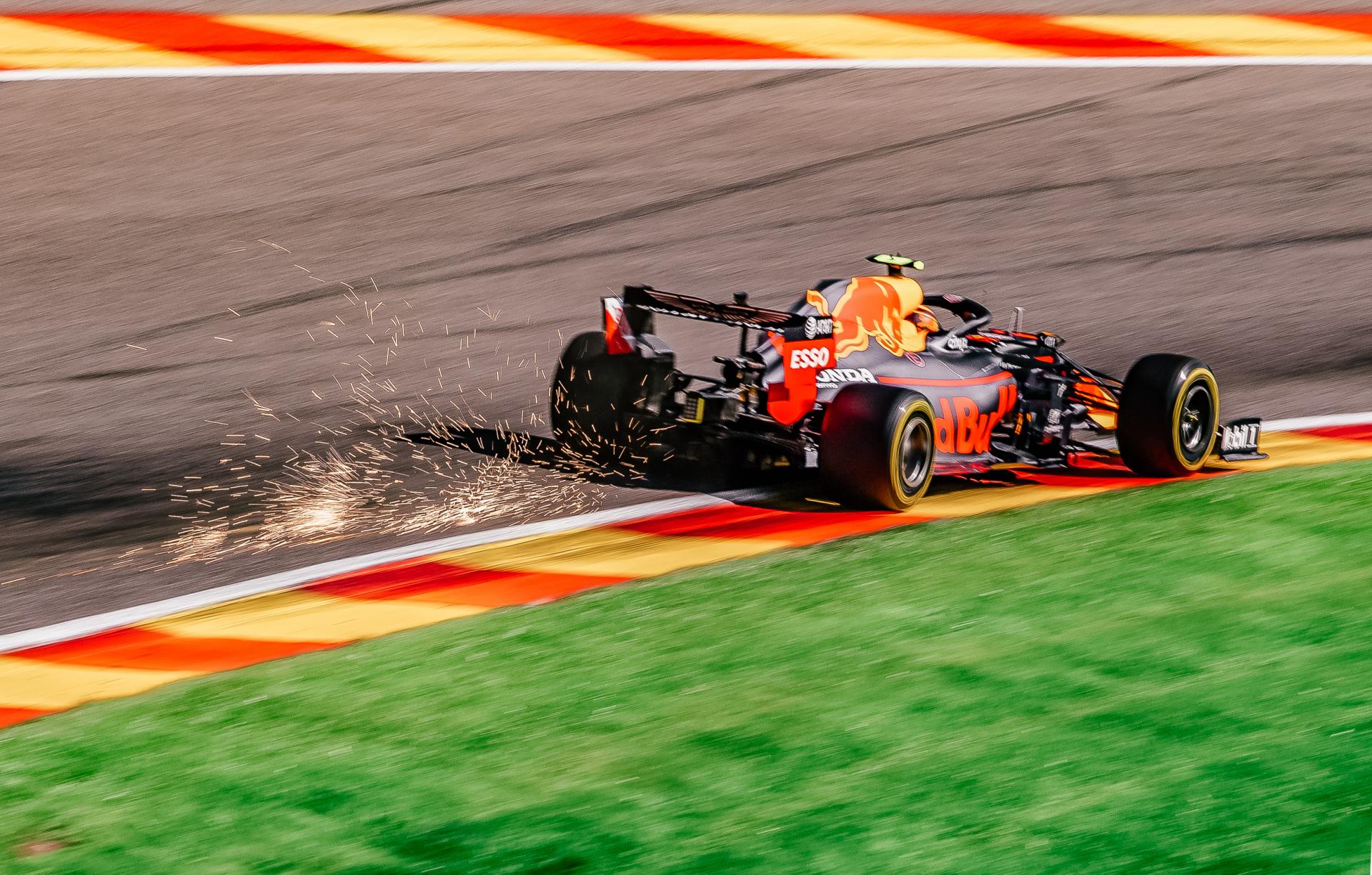 Heineken banners promoting its 0.0 Alcohol-Free Beer – so that we can all safely enjoy the household brew and still get behind the wheel – span the track at perfect intervals, and invoked a sense of familiarity and enjoyment when wed see its blue banner appear on our screens within the ultra-luxurious comfort of the Paddock Club.

As red smoke filled the sky to celebrate Ferrari’s triumph by Charles Leclerc, who aptly dedicated his first win to Hubert, titling the victory a ‘difficult weekend. I have lost a friend’ – many viewers were allowed to take stock of this both wonderous but catapulting sport – a sport which entices us, fuels us, invigorates us, but can, in an instant, completely humble us. It is for this reason that I think, above all sponsors of the racetracks and this coveted sport, of which there are many, Heineken installs itself with both honour and integrity. It’s four-year sponsorship of the F1 is not merely for the banners and the parades, and the admittedly other-worldly comfort of its paddock club hospitality experience. Heineken has taken this opportunity to advertise ethically and consciously – and its goal is to make Heineken the leading global beer brand in 0.0 (alcohol-free) beer. A healthier alternative, made from natural ingredients, preserving taste, and supporting sport-like innovation, are the signatures of a brand, I think, we can all get behind. So here’s to Heineken. 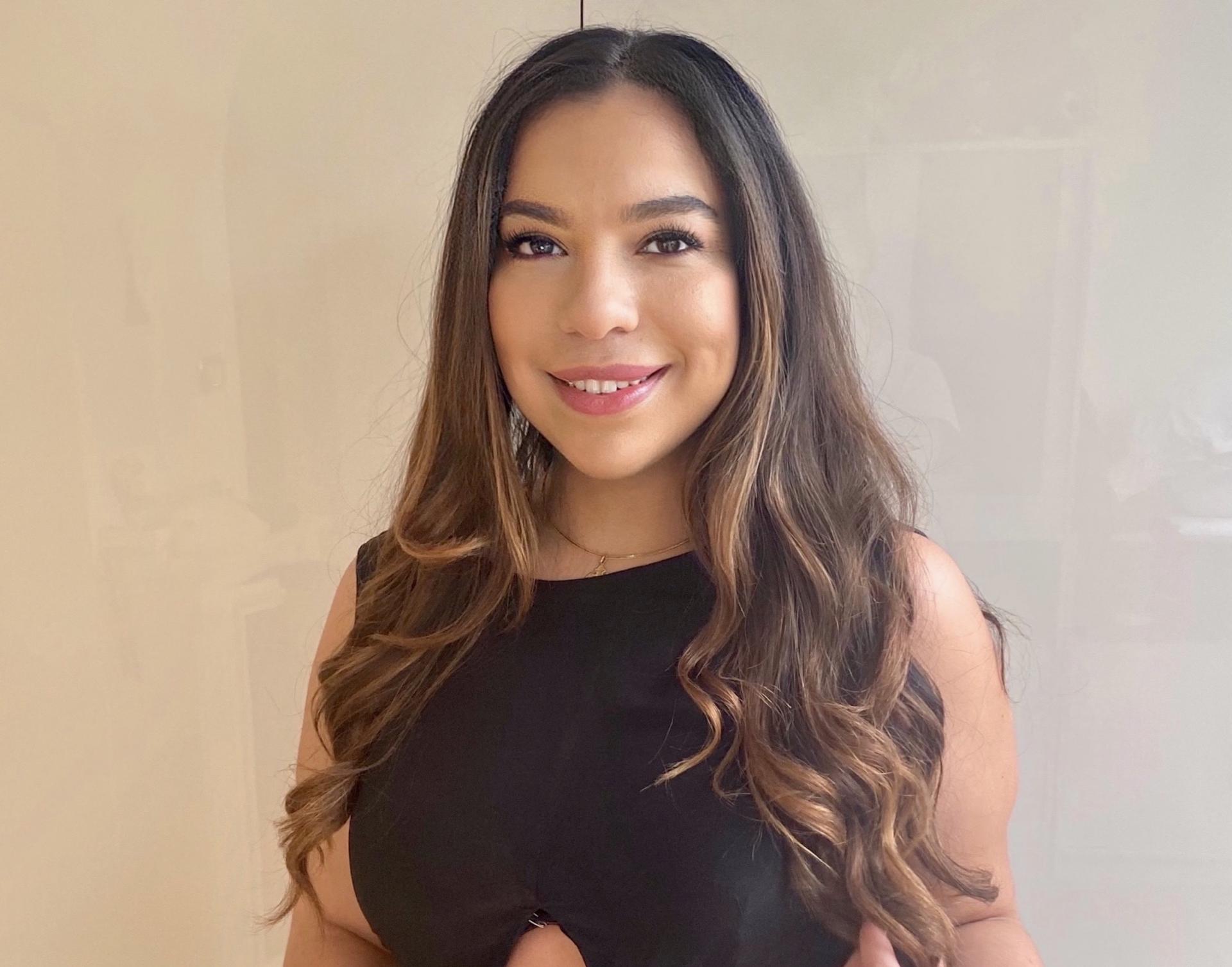 Visit our Instagram for a visual, editorial mood-board by our editor herself 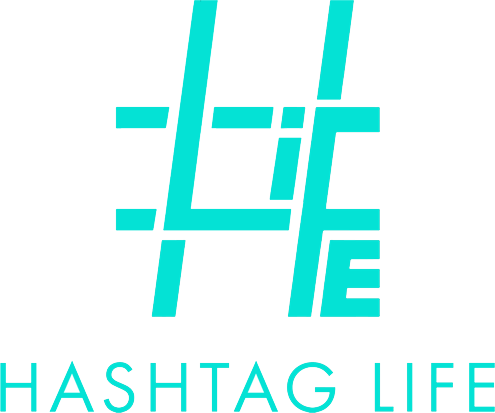 Skip to our homepage to view our Travel, Beauty, Food and Lifestyle Reviews 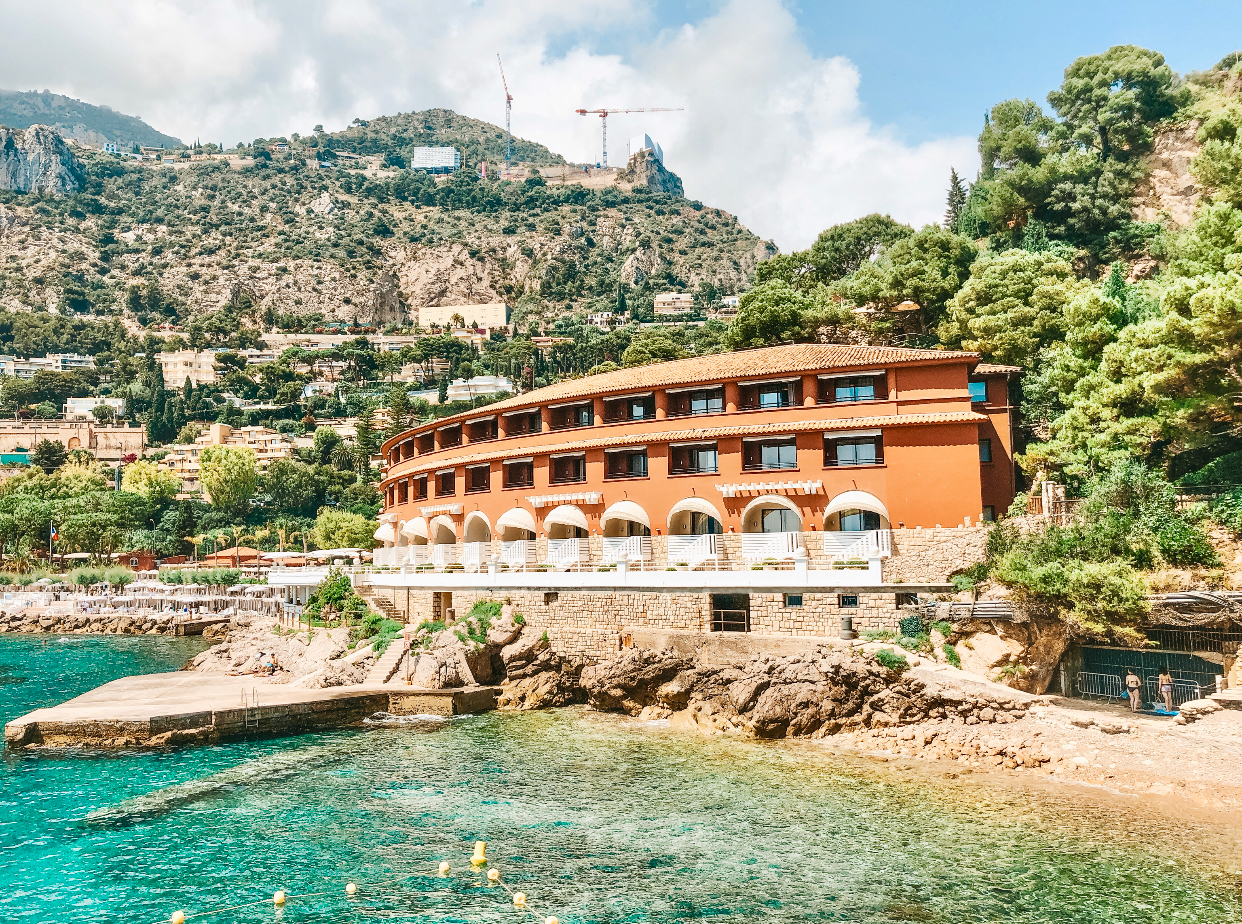 Skip to our travel features, and unique first hand reviews for every traveler