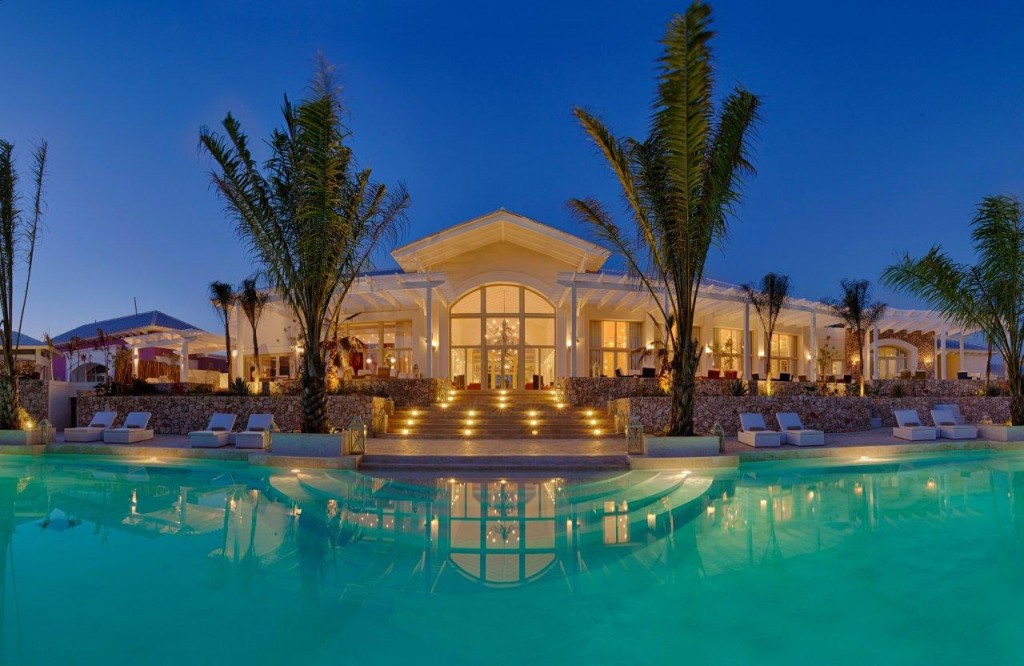 As we climbed out of the taxi which had drawn into the entrance of the Eden Roc Cap Cana, I stepped out of my body for a few seconds. It wasn’t because of the celestial surroundings presented by the calm garden landscape of the hotel’s exterior. It was because our driver was holding in a laugh so loud it would scare the chirping neighbourhood crickets onto foreign lands. Wishing to know what was so funny, I took a moment to observe myself. My hair was announcing its arrival by standing 6 inches upright, my strapless bra was having an identity crisis as a belt, and judging by the reflection off of my face and into my eyes, my skin was shinier than the sun. This is what happens when you fly LiatAir, anywhere in the Caribbean. You are, for starters, cooked alive to become a starter. I’ve always thought exercise would be so much more rewarding if you could hear your calories scream as you burned them. Their screams will forever haunt me, following the 40 minute flight on an inbuilt aircraft-sauna, a 50 minute stop over where people literally begged “can you open the plane doors please” and another 40 minute flight during which I reached muscle failure by frantically fanning myself with floppy paper bags reserved for throwing up in. No matter though, we were here, disorientated, melted, and ecstatic on the inside. 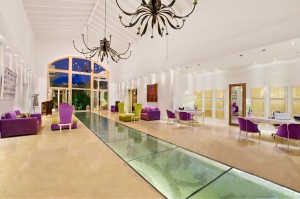 Greeted by the lovely Olga we walk into the grand lobby, realise that beneath our feet is a long glass fish tank along the centre of the room, and both instantly perform a synchronised jump to our respective sides. We shuffle back awkwardly as our host assures us we will not fall through the glass. I, with a little more reservation as I’ve been building up my muscle mass and you never know how much the stuff can weigh until you’ve cracked through the glass of a fish tank and the ground has quite literally swallowed you up.
The Eden Roc Cap Cana tells you to imagine the architecture of the French and Italian Rivieras, to add a touch of Spanish Colonialism, and to then imagine an enclave of these storybook villas set among the dreamy landscape of the Caribbean. This is exactly what you find, when you arrive at the hotel designed by Milan-based architect Marina Nova, where Mediterranean Revival architecture meets, of course, its Caribbean centre-point.

Checked in and raring to go, we climbed into the hostess’s buggy, to drive to our room. Georgia, my traveling companion and I instantly shoot one another a knowing glance. “We so get a beach-buggy” I mouth, as I lip-read her whispering “Do you think we get a beach buggy?” For this reason I missed the first 20 seconds of our buggy-tour, and will never know what was to the left of the entrance lobby. As we entered our suite all I heard for the next 60 seconds was that ringing sound you would get at the end of a VHS tape as the screen went multi-coloured. That is quite accurately the muted stupor I stood in for a minute or so. As soon as we were left to our own devices, Georgia began racing through the various outlets of the room, to better understand the combination routes you could take in this magnificent suite: out through the garden doors facing the pool, in through the garden doors facing the bed; in through the bathroom, right into the living-room sized shower, out into the second out-door private shower; in through the out-door shower, into the bathroom and Jacuzzi, left into a walk-in-wardrobe, left again out of the walk-in, right in to the bedroom. The combinations were endless. I have been challenged by my editor to avoid referencing Sex and The City for just one article. I promised: no more. Since I am a fool for punishment however, I have to reference the out-door shower which was in view from the long glass windows from the bathroom: a back-garden, if you will with a baby pink settee and cushions and a huge shower-for-two-or-more. If that doesn’t scream Samantha, then I don’t know what will. “DON’T touch anything!” I yelled as I got ready to start documenting this fascinating pink palace of a suite. Georgia emerged from the walk in closet with four towel-based flip-flops, two on her feet, and two on her hands, I assume, in mid-offering to me “Hmm?!” she replied with big eyes in her most “It wasn’t me” style. I take my photos and minutes later we are both running around the suite playing with the iPad they’ve which connects your iPhone music to booming speakers in the garden, pool, room, living room, and bathroom. We played with the music and the light balances like newly born DJ’s for the next hour at least. (read: for the rest of our stay). 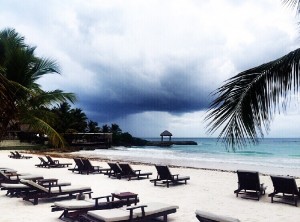 Next stop was the beach. Georgia, selfie-stick, outfit-changes, and I, all piled into our beach-buggy, and headed toward the beach, which Olga had told us was a right from reception. Easy, right? Wrong. One right turn later, our buggy was staring at a main road. A dual-carriageway main road. “Its fine, it looks empty” I tell Georgia who’s driving. A lorry passes us. Silence ensues.
“Which lane” she screams “Think QUICK!”
Unable to cope with the pressure, more silence ensued from me.
“I can’t drive on the other side of the road!” she squeals.
“We’re in a buggy, on a main road, and you’re worried about the driving direction?!” I was simply worried our little faux-auto-mobile would stall, and we would be sitting ducks on this great big road. 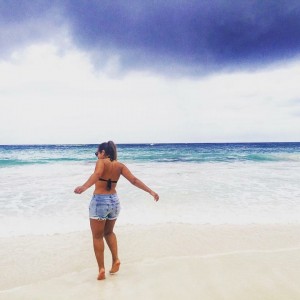 An entire kilometre spent screaming and dodging oncoming traffic later, like Dione out of Clueless as she accidentally hits a motorway with her L-plates on and Cher in the back seat, we made it. Alive. As we entered the Caléton Beach Club, we were welcomed by an immaculately groomed white-sand beach with turquoise waters and beautifully aligned straw-hut umbrellas. Crossing over the lagoon-style pool and rushing to take off my flip-flops as I hop across the bridge in excitement, I land on the white sand and start stomping around like a toddler who’s just discovered their very own sand pit. Behold it pretty much was my very own, as the long stretch of the beach looked to be all ours for a few hours. I instantly rush forward toward the sea, claim a beach bed or four, and look behind me in search of Georgia. Kneeling in the distance I squint for closer inspection. Is she praying? Is she grabbing the sand with both fists and letting it slip through her fingers as she looks up at the heavens? No, no it looks like she’s… ah. She’s setting up the selfie-stick. Excellent work. We rush into the calm, gentle waves in the water and start clicking away ecstatically. I am in heaven. Plop.
“Joanna, I think it’s…”
“No! No! That was water from the sea!” I cry back.
Plop plop plop. Thunder.
“No, Joanna, I really do think it’s rain. I think it might be my travel curs…”
I shoot Georgia a look of daggers, daring her to complete her sentence. She doesn’t. Moments later we find ourselves sheltered from the diagonal, sleeting rain, reminding us that you can escape London dear naive girls, but you cannot escape it’s rain, ordering the strongest liquor available from the cool, comfortable and chic La Palapa beach bear and restaurant.

There was a strange tranquillity to it all as we sat at La Palapa taking in the rainfall. The beach landscape is so stunning, so welcoming, that I could picture no other sea but this one, no other sands but these. You could rain on me any day, Cap Cana, and this London girl would still prefer to call you home.

The dining offerings at Eden Roc are aplenty: Meditteranean cuisine by Chef Gianluca Re Fraschini, at the Mediterraneo Restaurant presents a dining experience for both breakfast and dinner unlike any other in Punta Cana. Inspiring views of the main pool sooth the spirit, while the palate meets around-the-world tastes at the Gastronomico Restaurant. An exclusive area at La Cava, the wine cellar, is the choice for intimate dinners with exquisite pairings, and La Palapa, as we sat there in our faux-monsoon season setting, offers as well as spectacular views of the Caribbean Sea, a fusion of Italian and International cuisines with traditional local influences.

Going out:
Evenings out in Punta Cana are interesting. As we sat in our bathrobes in the room, after trying out the three different bath and shower options available in the suite, eating left over omelette from the breakfast we’d ordered to the room that morning, (I may have been a novice to portion size estimation, as Georgia threw her hands up and refused to act as the face of the in-room-breakfast-ordering-team any longer after the third trolley of food was wheeled in by a team – yes team ­– of waiters who were embarrassed for us) discussing our options for a night out, we realised that we were no longer the 20-something-year-olds that I would like to report. We were our mums, on holiday. Coco Bongo – which I kept referring to as Um Bungo ­ the tropical fruit juice which my parents never allowed me to take as tuck to school – was the general consensus for a night out. Loud flaring music, glaring lights, performances, dancers, fire breathers, crowds, vertigo inside a club so tall you don’t know whether you’re indoors or out, and basically my worst nightmare on a relaxing holiday. A few conversation barriers and an exhausted receptionist later, we conceded that a beach bar named Jellyfish, which I’d found online was the one for me.

A cosy, beautiful, fairy-lit, open-air, two story beach bar, where some choose to get married, others choose to sit on cushions on the sand and listen to music for an evening’s dinner, seemed like bliss to us. So in we piled, to our over-priced taxi, for the twenty minute drive. We arrived, with our wrists already assuming the appropriate positions for holding our wine glasses, and started marching toward the beach. Not so fast, we were told, as management informed us that we could only sit upstairs as the ground floor and beach-patio of the bar had been hired out for a wedding. We walked upstairs only to find that a curtain had been drawn over the entire floor to close it off from the view onto the beach. A million get-out-clauses ran through my head – should I plead diplomatic status? Should I claim to be a rockstar? Should I morph into a health and safety inspector who bizarrely enough speaks not the language? Opening my mouth to attempt a confused combination of all the above, all that tumbled out was a plea. I begged, and Georgia hid her face in her hands. Moments later, the curtains were lifted as we had gained permission to wedding-watch for the evening. I was uncertain what could be more blissful than nights like these. Such is the setting of a visit to Cap Cana; the Eden Roc Hotel prepares you for an opulence, and home-like-comfort that no place can rival, and then it propels you into the Punta Cana experience: where bliss meets harmony, affording you a first class seat, to what life should be, and indeed can be quite like.