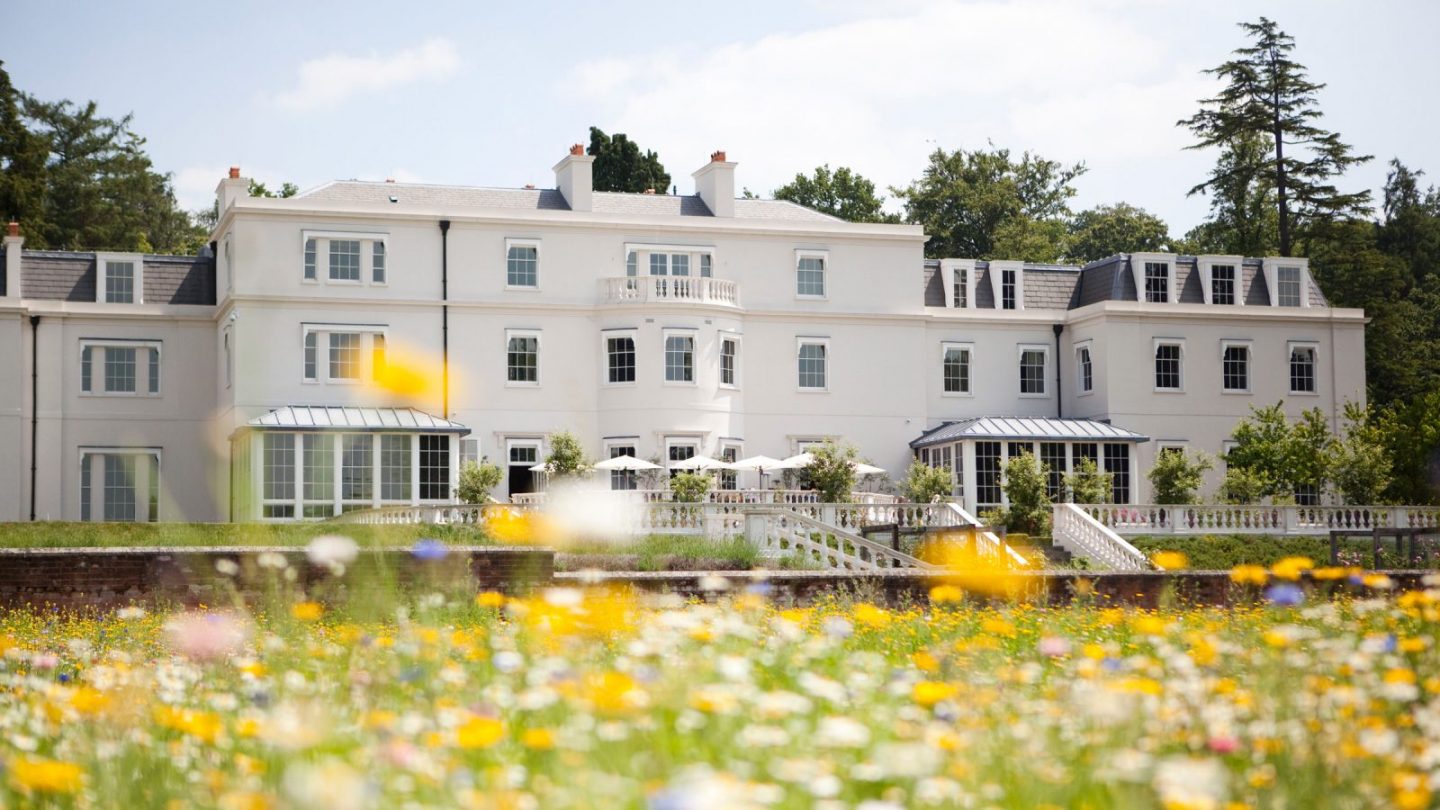 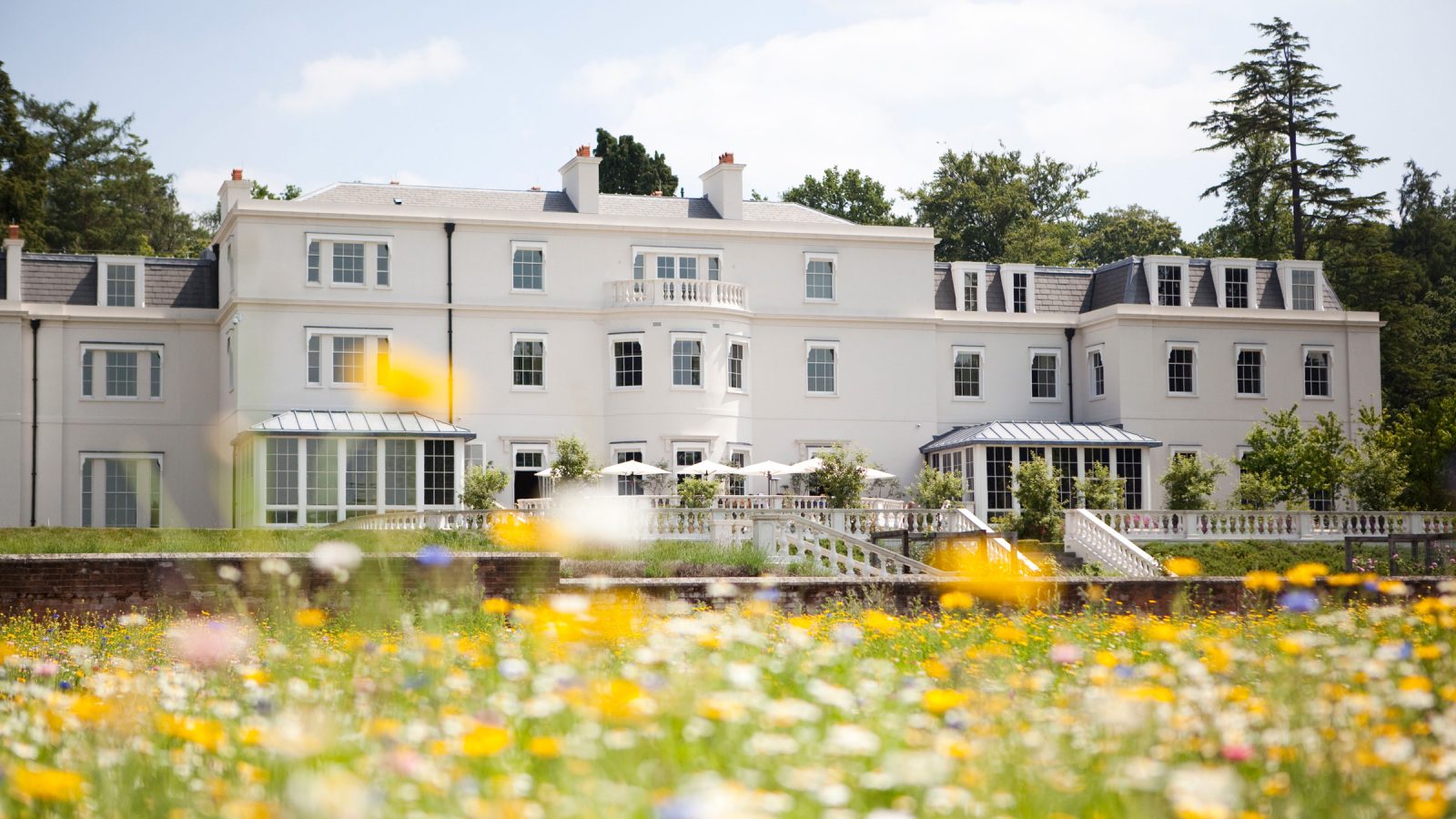 As soon as I’d arrived, and begun sharing videos of our location to our audience, my phone began trilling with messages from viewers, telling that this was their ‘favourite place’ and asking if I was visiting the restaurant. Such is the reputation which precedes Coworth Park.

Coworth Park, set within Ascot’s beautiful parklands, and part of the Dorchester Collection, is the only hotel in the UK with its own polo fields. The hotel’s equestrian centre offers horse-riding to its guests as well as stable facilities. Quintessentially British, and dreamily so too. On this occasion we were visiting Adam Smith’s Michelin Starred restaurant by the same name, Coworth Park. 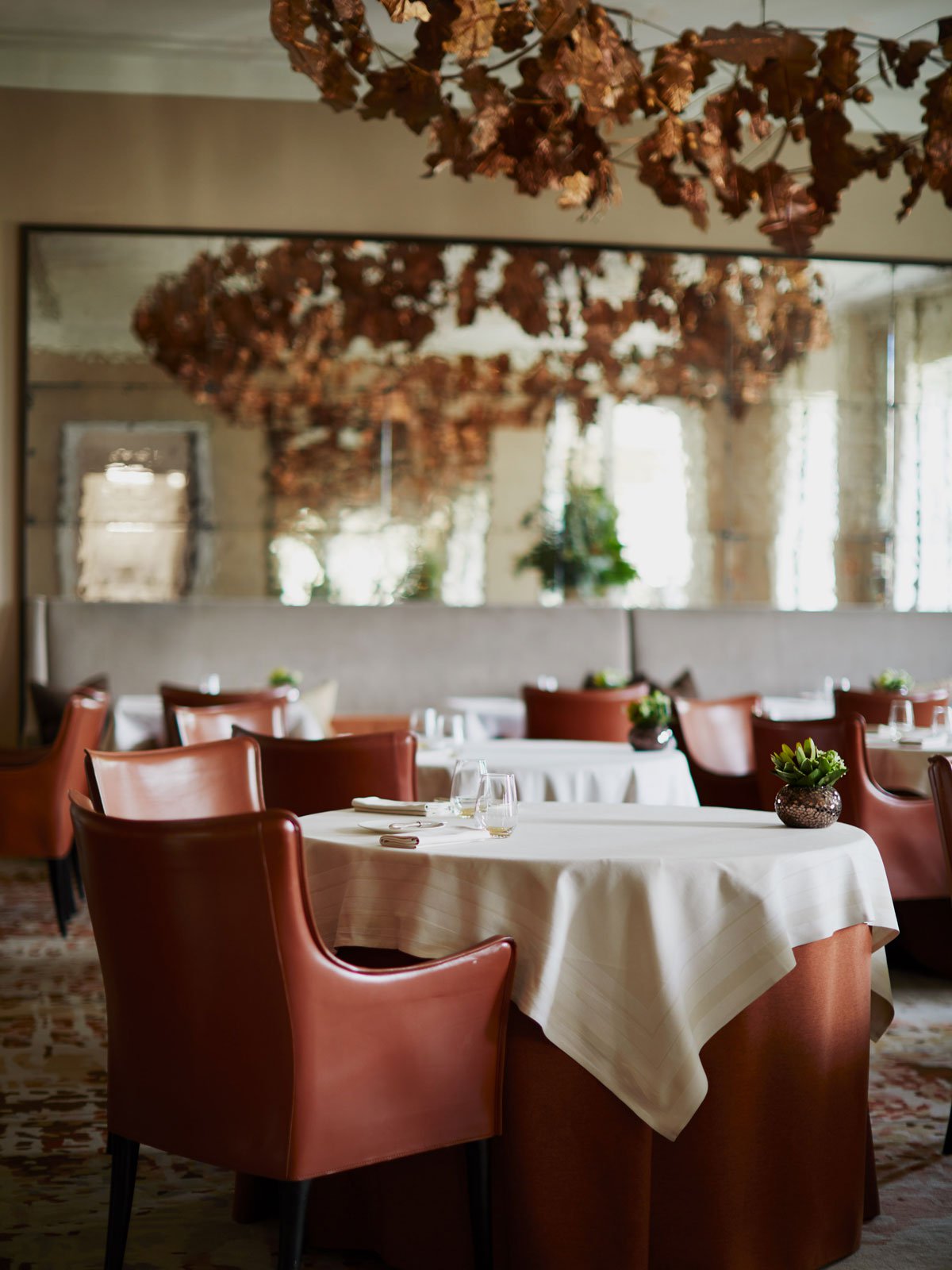 We entered the warmly lit restaurant adorned with a burnishing oak leaf chandelier, and which overlooks the hotels beautiful terrace and grounds, as the first guests. As the evening would proceed the restaurant would fill to the brim, and yet, we would hardly notice. The service and hospitality at the restaurant, as well as its staff and hosts, move almost symphonically. The combination of this ease and atmospheric confidence, with the beautiful British dishes which were to follow, made our evening so memorable and every bit worth re-living.

The menu on offer features Michelin-awarded creations by Chef Adam Smith for the second year running. The Chef is impassioned by creating dishes of ‘simple beauty’ and inspired by flavours we can find in our herb gardens, the meadows, or local woodlands. For him, ‘taste is king’ and he looks to keep to the authentic flavour of the ingredients he uses.

We opted for the seven course tasting menu, allowing us to sample the ingenuity and spectrum of flavours Coworth has to be explored. Amuse bouches included tomatoes three-ways which played on the sweet tartness of tomatoes as well as their textures along with an avocado mousse which re-set and cooled down the citric tang harmoniously. Alongside it, was another taste-teaser, the creamy and indulgent salmon cigar roll with a dollop of caviar.

A highlight, aside from the food, was the enthused journey of discovery we were led on with each course, aided greatly by restaurant manager Jonathan who would detail each dish as it was presented to us. The first of these, was one of three starters, competing with one another in flavour, surprise and satisfaction, a juicy langoustine skewer with fermented carrot. Following this was the indulgent flammenkeuche (a slightly doughy flat bread) topped with generous layers of aromatic black truffle, creme fraiche, and shallots. Last for the starters was a signature item which never leaves the menu, as other dishes rotate seasonally: the caviar tart. A sweet layer of white crab meat beneath the cool caviar, in a crumbly pastry base makes for the perfect pairing of both textures and flavour – aside from the unforgettable taste journey it leads us on, it is also a dish of aesthetic glory. I almost cannot stop thinking about it. 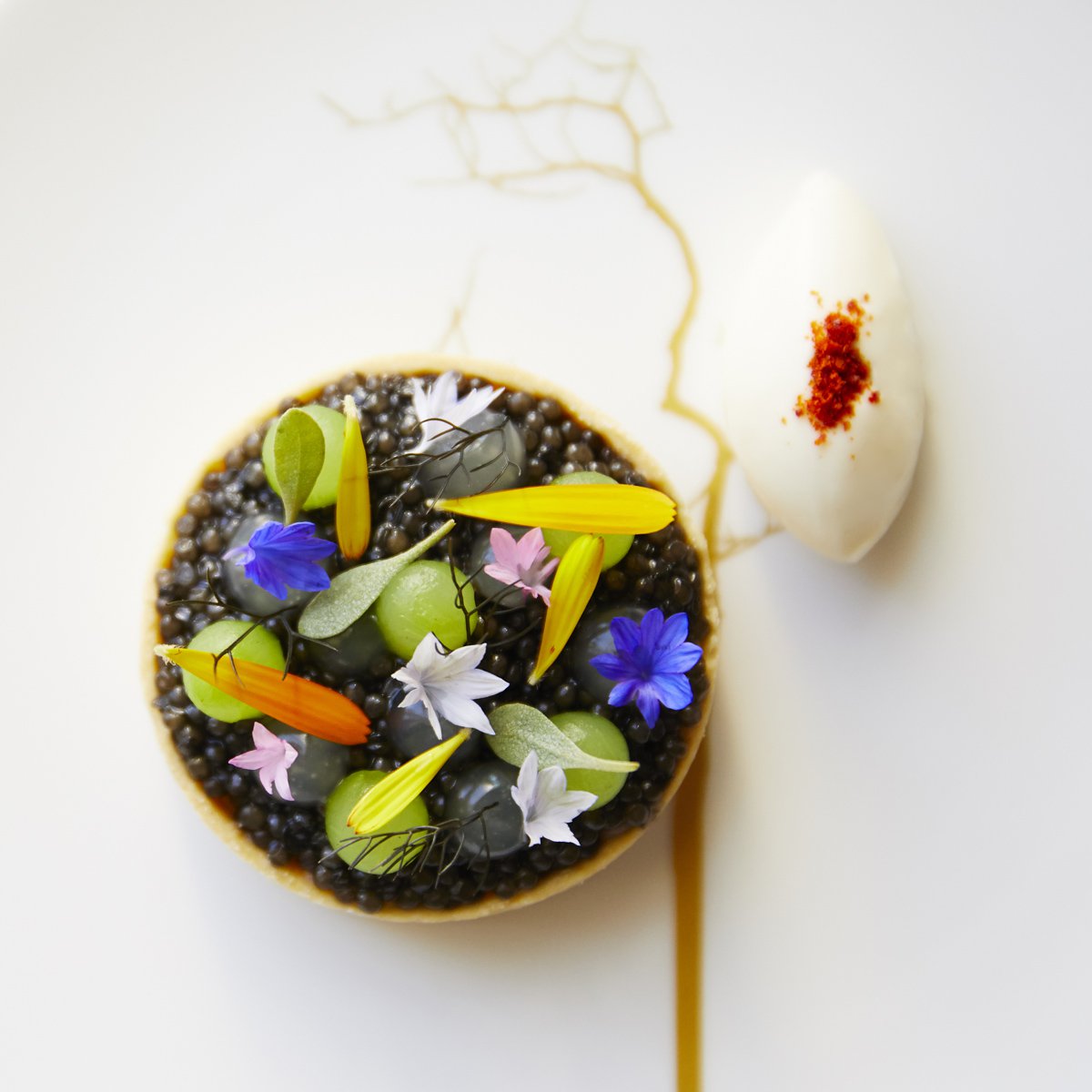 Just when  I thought this was the dish of the day – the final starter – the Heritage Carrot – stormed in and stole the show. Whilst not a dish I would normally order just by looking at it on a menu – I am so glad we were introduced via the tasting menu, another reason (aside from all the courses) that they are always a good idea versus a la carte. It comes on a bed of “bath soft”, a creamy, slightly nutty cheese, as well as the most perfectly thick single egg yolk, all atop a crisp, seeded flatbread. The dish is utter perfection.

With bare space for mains, we were also treated to the John Dory – an aromatic dish made all the better for the lovage sauce which is drizzled over it. A delicious addition to the dish, the lovage makes this a creamy, moreish main. The second main we opted for was the Salt Aged beef – a perfectly pink cut of filet which melts in the mouth but envelopes a really beautifully mature beef, in the thick mushroom flavours around it. 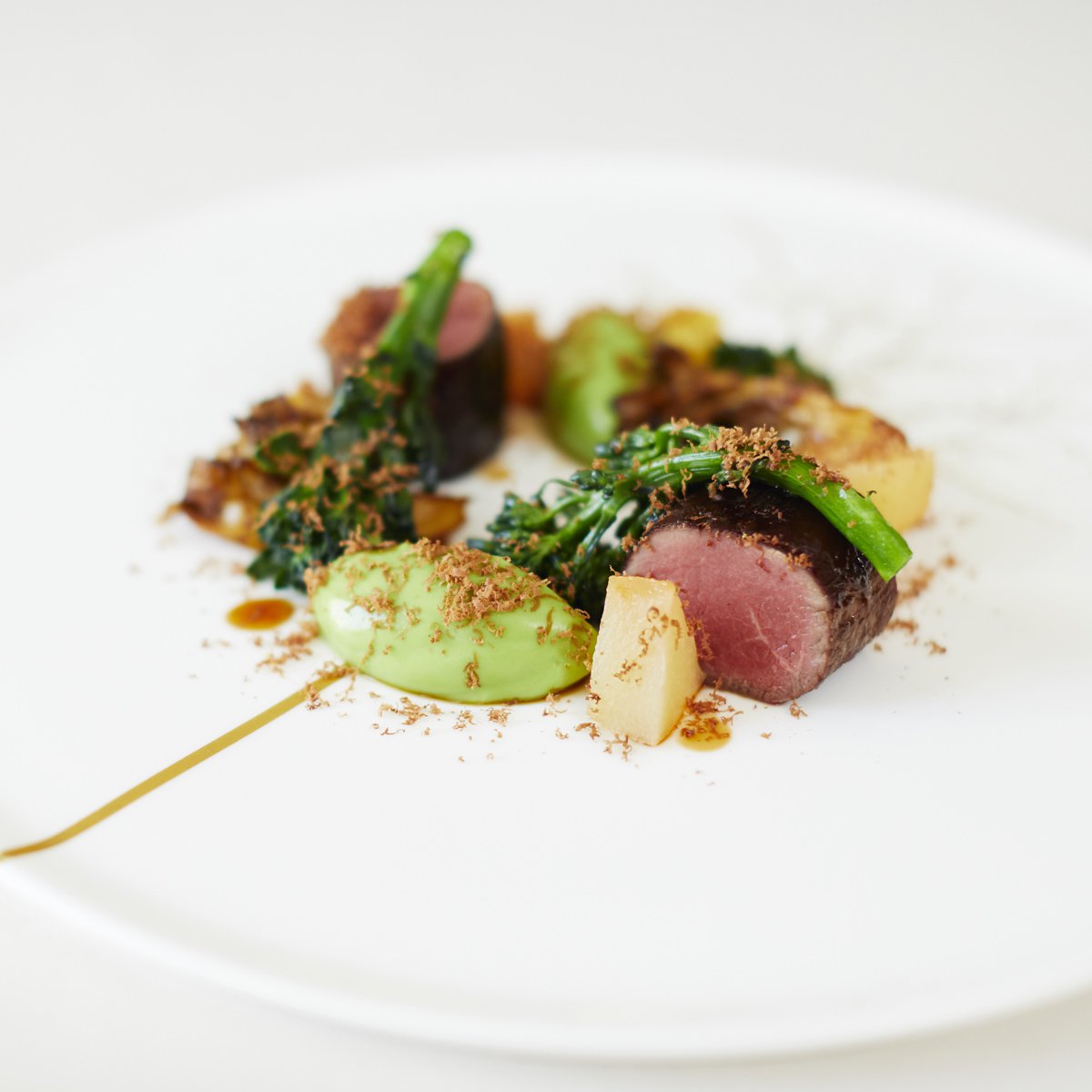 Whilst barely able to breathe, we made the final journey onto desserts which were equally pleasing as their predecessing plates!

The passionfruit tart with a beautiful buttery vanilla cream on top was a light enough dessert to fill the very very little space we had left.

My conclusion on Chef Adams extremely Michelin worthy cuisine has been one of resounding awe and memorable respect. I have a love for finding cuisine which scales us down to curious little children, mesmerised when a new taste hits the tongue: something familiar but which you can’t quite place because you’ve never really tasted it just like this. That is what Chef Adam evokes in his diners. Initial curiosity, followed by utter glee, and a happy satisfaction as we discover each dish in his true-to-flavour creations.

I would revisit Coworth Park in a heartbeat, I look forward to many more years of its creative cuisine, and to Chef Adams future restaurants. 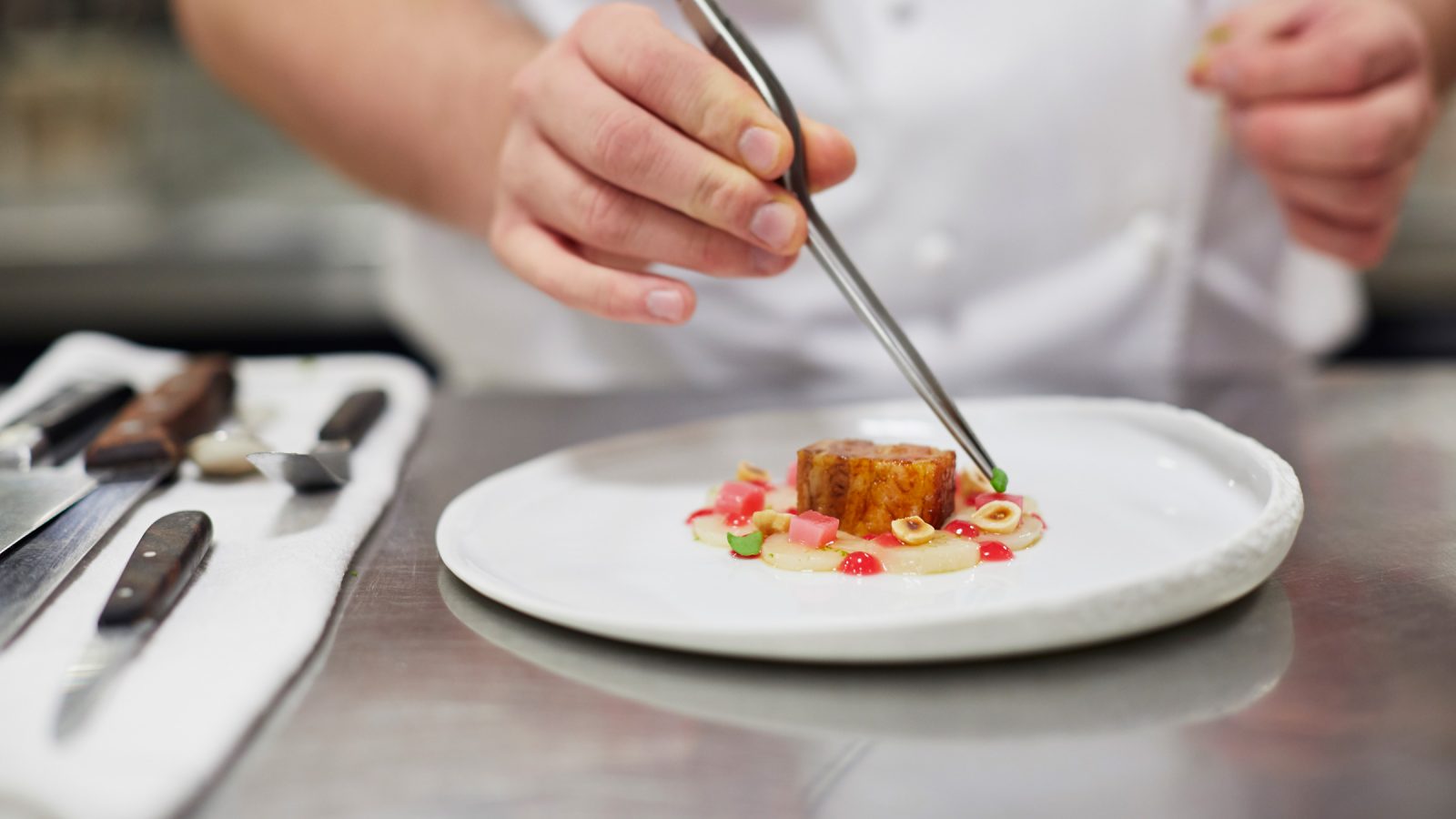