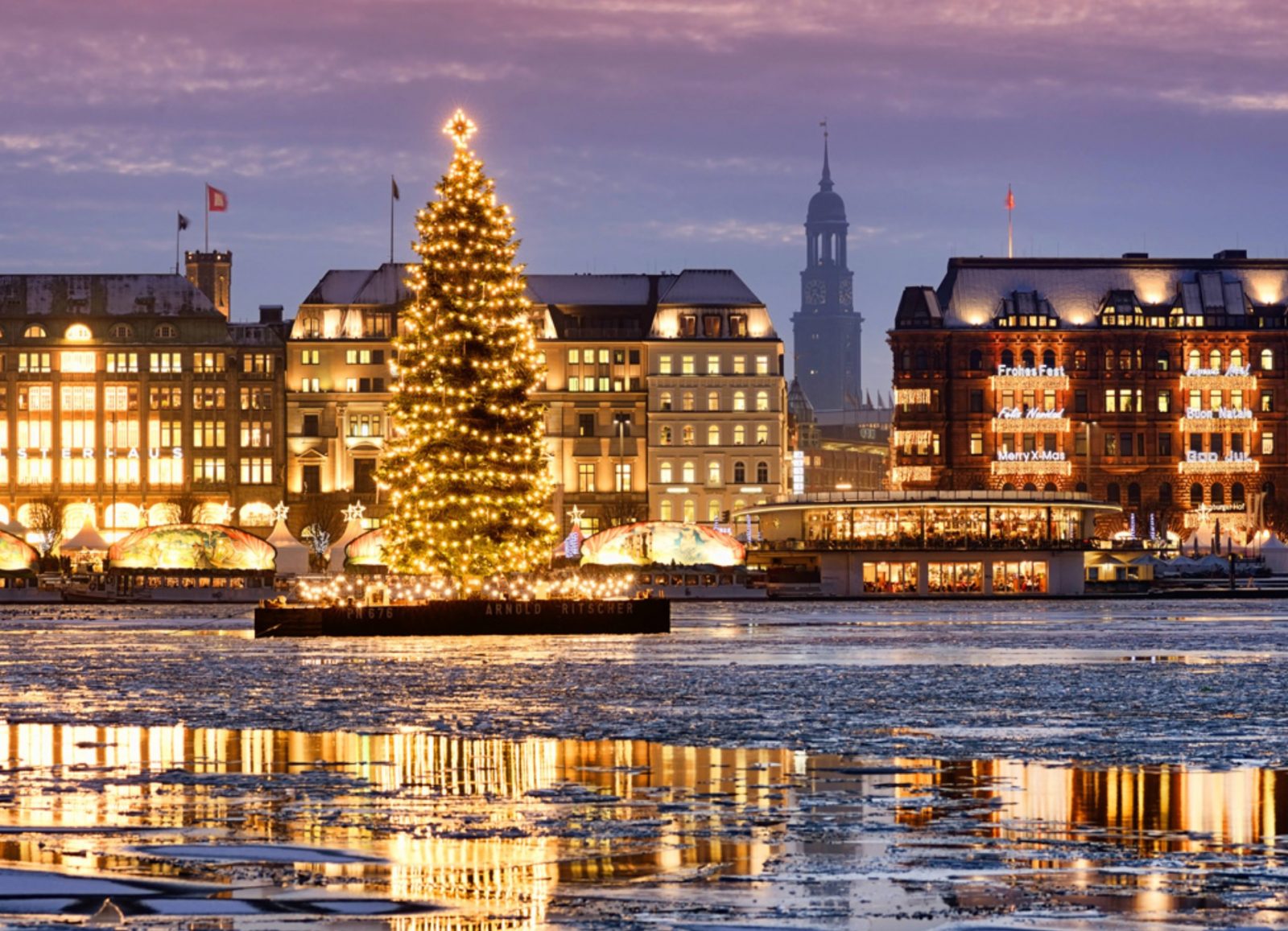 When we learnt that Hamburg polls as the ‘Happiest City in Germany’, we thought there would be no better place to experience December’s festive cheer than by exploring the city’s Christmas Markets. One thing we learned for sure is that the ‘Hamburgers’ do Christmas a little differently. In fact, Hamburg seems to wear it’s laid-back, non-conformist cultural identity as a badge honour – and maybe that’s the secret to their happiness!

We anticipate it all year round, and then all at once December rushes in, and the lights and festivities and Christmas cheer are awakened once more. So out we march into the cold, fearlessly, to show the year-end what we’re made of. This December we decided to do that by bracing new threat-levels of frost-bite in Hamburg, because where else hosts Christmas Markets like Germany?

Despite it’s artic winter weather – Hamburg  apparently actually houses the happiest people in all of Germany. This happy little city is sandwiched between the North and Baltic seas, and boasts urban flair, sandy beaches, picturesque old towns, and rural beauty. Although I’d set off for 48 hours of Christmas-Market-marathoning and all the mulled wine and food-stall-sampling which accompanies it, this prerogative took a back seat to the local charm of the city and it’s people; a vibe which seems to emanate that ‘Hamburgers’ as we came to call them, march to a beat of their own. Here’s why:

The city, foremost, screams history and heritage: if, like me, you thrive off of learning of the stories of old which characterise the different quarters of a city; it’s architecture, it’s community, it’s vibe, then Hamburg is a City of endless trivia. I won’t list the endless facts which would arm you as a winner of a Hamburg pub quiz; such as it’s home to UNESCO world heritage sites, many a Nobel Prize laureate, Germany’s oldest stock-market, or even it’s first place for sunniest city in Germany. Let’s look at the fun stuff! 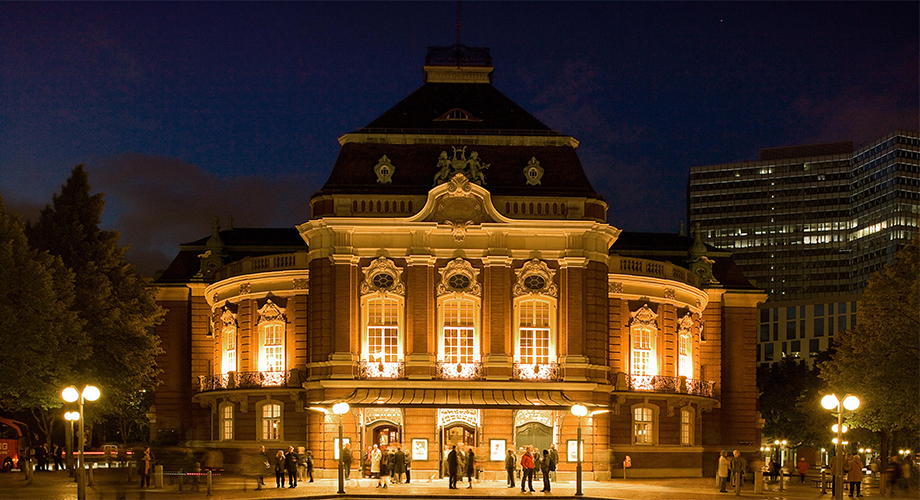 One of my most exciting discoveries of the weekend was how rooted Hamburg is in it’s music culture – especially hip hop. From birthing international superstars like ‘Beginner’ and “Ace T’, Hamburg’s 90’s soft hip-hop vibe has trickled into local culture with eminence; it is one of Europe’s few cities whose pubs and clubs will opt for hip-hop rather than dance and clubhouse playlists, and whose cosmopolitan vibe has taken hip-hop style into it’s identity; from the ‘street-art’ graffiti which is somewhat, locally welcomed and celebrated; to the many streetwear fashion labels which adopt the genre’s cool, casual, everyday styles. 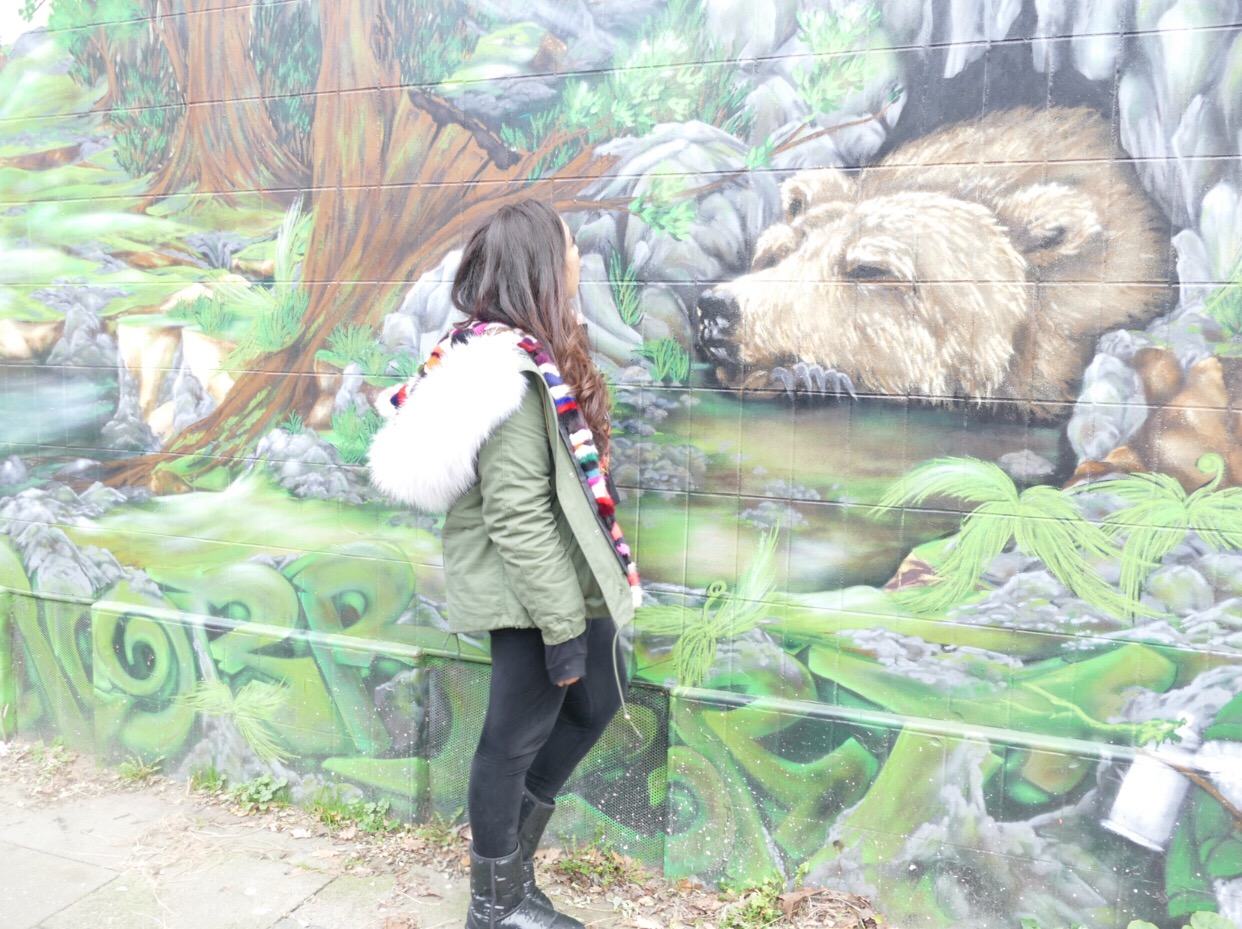 Hamburg’s claim to musical influence extends so much further, having birthed classical composer Bach, and with John Lennon famously saying “I might have been born in Liverpool, but I grew up in Hamburg”. But perhaps the city’s most impressive musical stamp is the Elbphilharmonie; a stunning giant concert hall overlooking the Elb River. We visited it for a wander around it’s bright, acoustic-friendly, glass-like structure, and the view it affords you of the river, and the many docking cargo-ships and warehouses which characterise Hamburg’s old, red-brick architecture.

So this is the cool, urban, laid back city we wandered around on our first night; a hybrid of period and modern architecture; old and new; bustling and chilled. But what we’d really come for was a taste of the infamous German Christmas Markets, so with lots to see and very little time, here is a list of the many quirky little markets you’ll find; all with spectacular (and ultra-strong) mulled-wine, each with their own character:

Probably the most unmissable, and certainly the largest affair, is the Santa Pauli Christmas market. It does Christmas – lets say – a little differently. Along with two long columns of stalls selling the usual: tempting foods, drinks, and addictively purchasable little trinkets, one end of the market is dedicated to a massive stage which hosts live music events some evenings, giving the Christmas Market a massive out-door-party overhaul. But then theres the discovery I made as to why it is an ‘Adults Only’ market – and it’s got nothing to do with the certainty of losing anyone under 4 foot in the large, merry, crowds. Its the fact that up the stairs behind the stage, past security guards into a dark, canopied bar area – Christmas basically ends. This is where they host their nightly strip-shows, I learned. Not cheeky, elf-costumed women sitting on Santa’s lap with the occasional unrolling of a thigh-high stocking or similar. No. Actual strip shows. I wasn’t sure which was more confusing; that such a thing  so casually exists at your ‘friendly neighbourhood Christmas Market’ or that its dropped into casual conversation like the most normal thing in the world!

So if you’re looking to recover the next morning the little wooden huts of the Ottensen Christmas Markets. A far more traditional family-friendly market, the atmosphere here will attract residents and tourists alike for a stroll amongst the 40-odd huts of authentic local gifts, crafts and artisanal products. 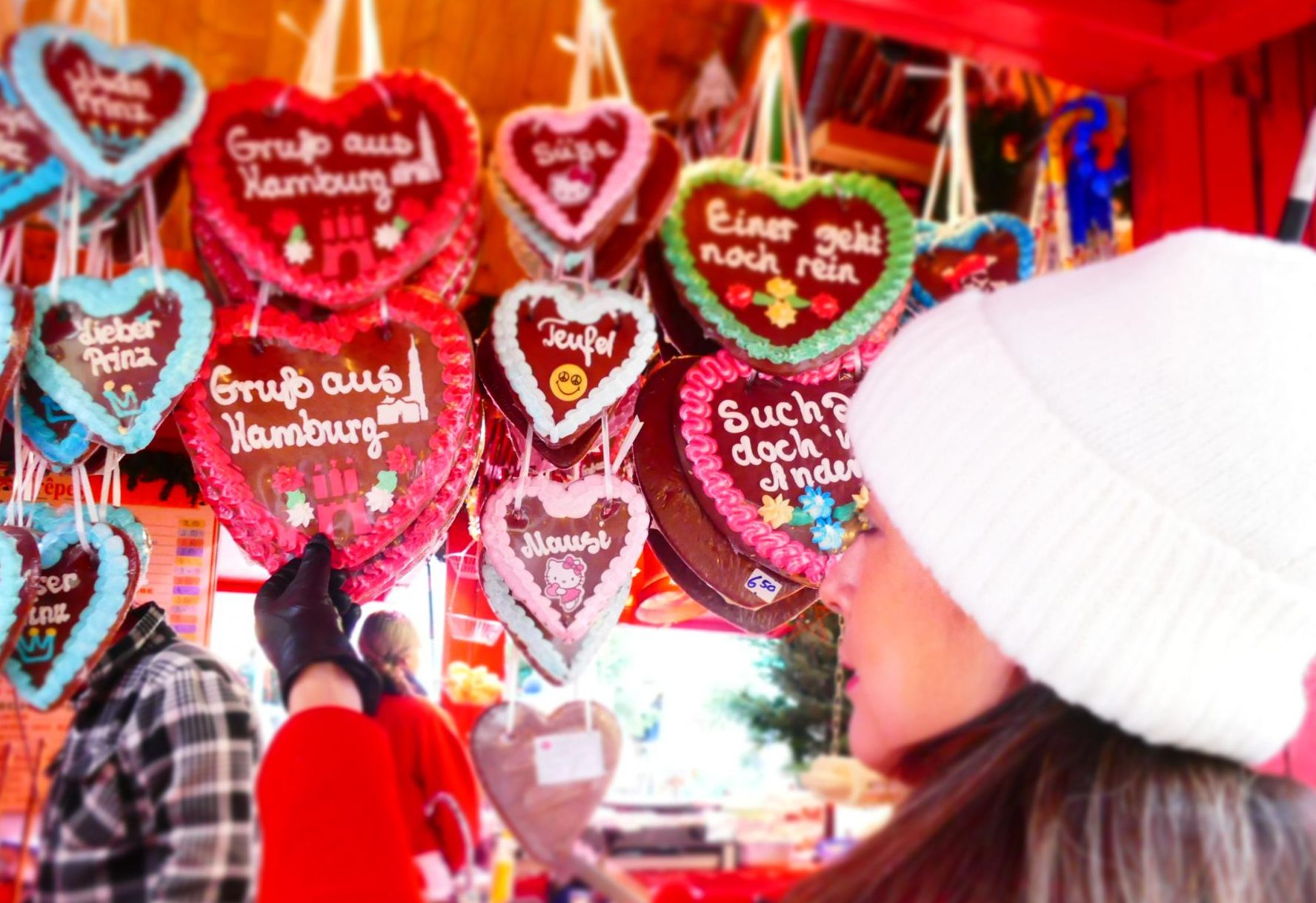 If you’re looking for something a little more modern-feeling, the HafenCity Christmas Market in the Uberseequartier, hosts an ice-rink for those not permanently-attached a hot-drink for warmth! A giant pegasus made of Christmas-lights hovers above the pretty white pagoda tents of each stall; sealing the enchantment and romance of this quarter of the City’s take on Christmas. With Christmas trees for sale, lantern processions, a much talked about Christmas-bakery and carousels, it offers something a little different to your average market, whilst packing in the usual goodies all the same.

If you’re touristing near the city centre – especially for those interested in discovering this city’s pleasantly surprising fashionable side – then be sure to pop in to the Winter Pride Market in St Georg which hosts a “Schrottwichteln” – translating as: ‘Rubbish Secret Santa’ – where visitors can exchange their least-liked Christmas presents. Make sure you don’t end up in a Friends moment, by doing a Rachel and accidentally returning a gift to the person who gave it to you! 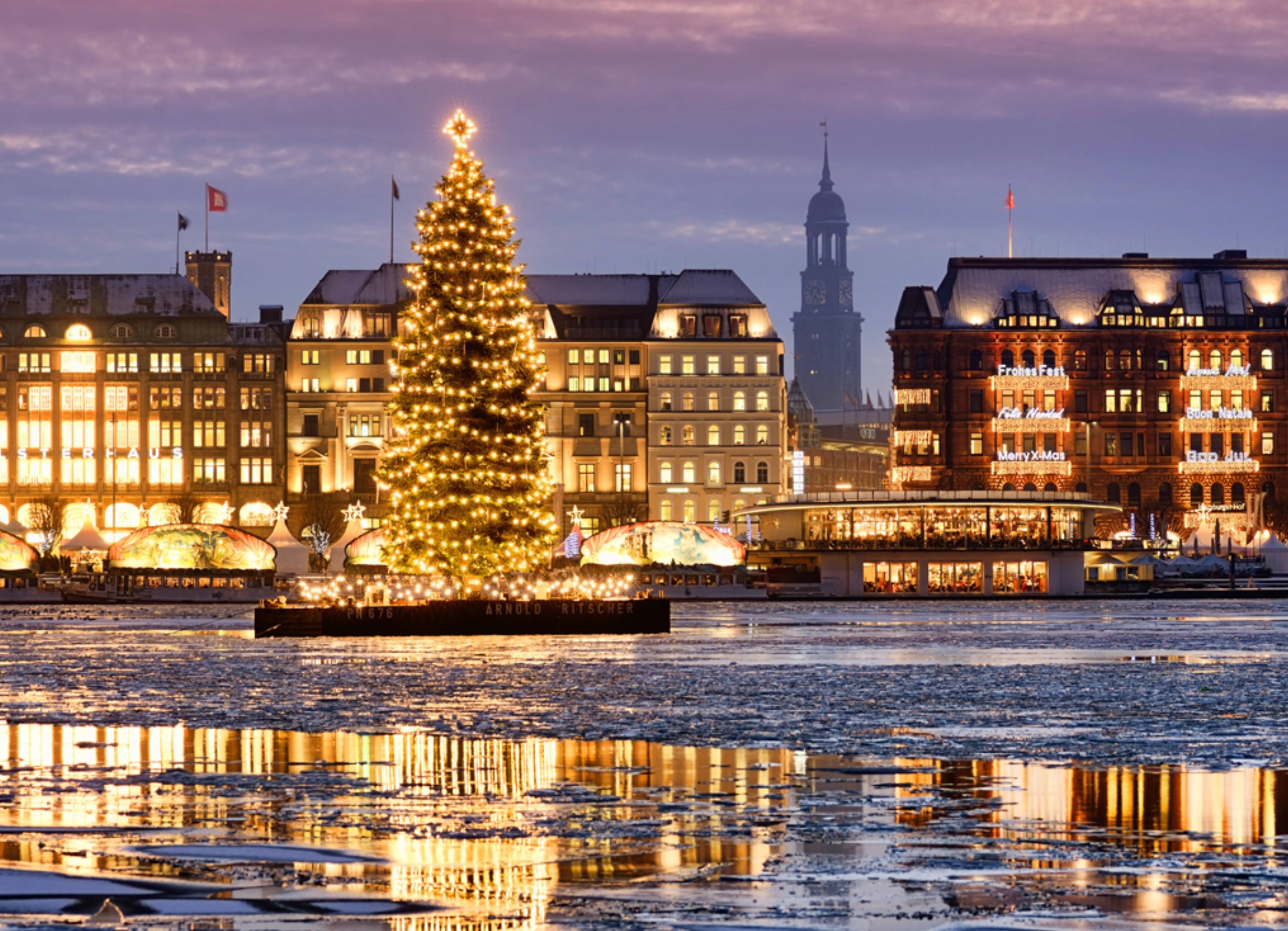 The Portuguese Quarter offers something from the local Portuguese and Spanish communities and it might just be a seasonal festive market but really its focus is on just one thing: food, glorious food. The infusion of cuisines gives this market a pan-European flair for the hungry wanderer – so perhaps start here to fuel yourself as you set out on the City’s Christmas trail. 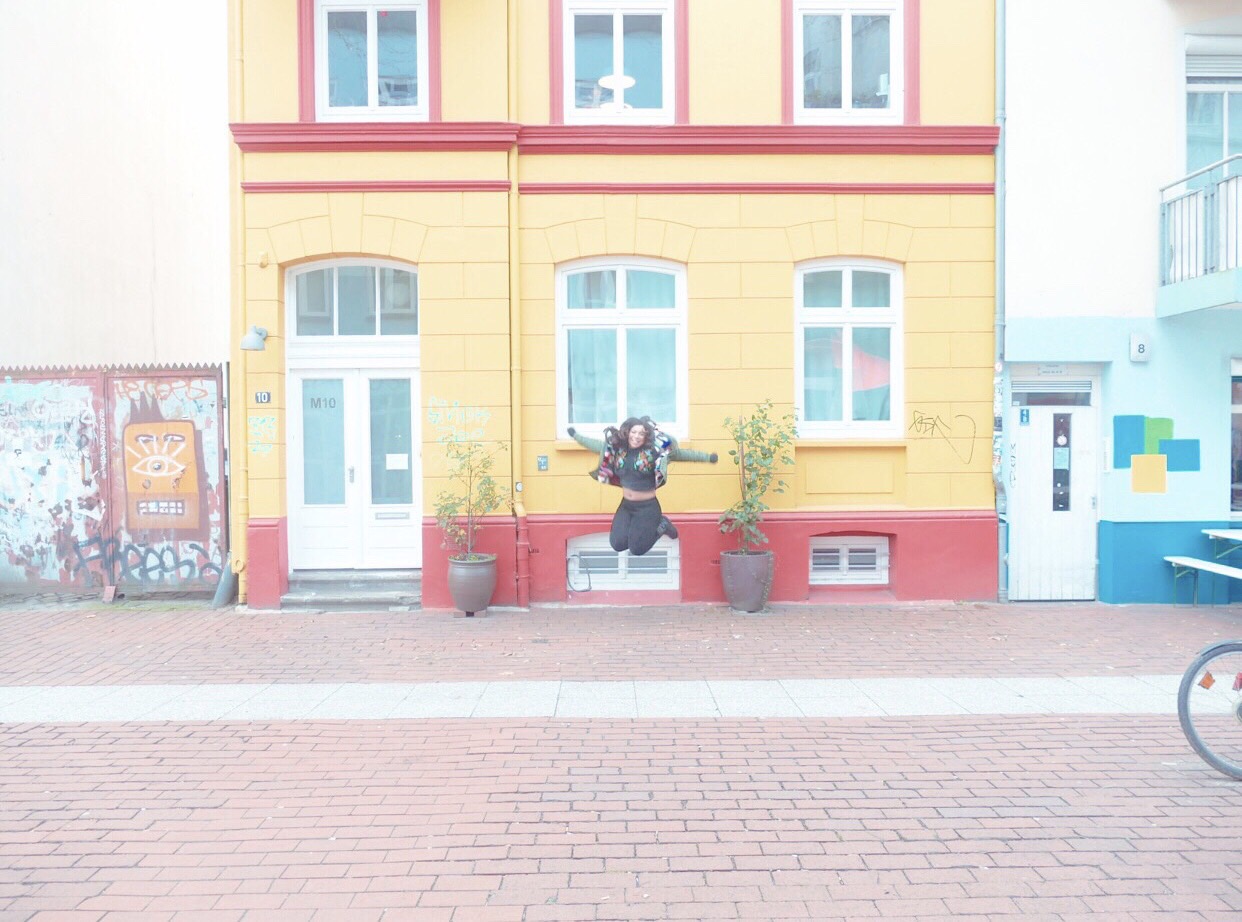 Hamburg is difficult to visit for just a weekend – its cultural vibes and niches are so varied and un-put-on, that it is a city you need to ‘get to know’ to truly experience. The food-scene has not yet been taken over by healthy-eating pop ups and new restaurants of modern-cuisine visions. Instead, like the rest of the city, the food-scene has evolved seemingly naturally. Even as a tourist, it can be easy to spot ‘chain’ restaurants and inescapable neon fast-food signs, but I hardly noticed many at all. Instead, Hamburg swaps this out for street-food stalls, their beloved Fish Market (which is rather weirdly Hamburg’s equivalent to the burger-stop us Brits will crave at the end of a night out), traditional restaurants serving up ‘mamas home comforts’, an inexplicable number of sushi restaurants, and of course as the home of the Hamburger: burger-bars galore.

Where to stay: We stayed at the Pyjama Im Fritz Hotel, which really serves as just a conveniently located stopover, two minutes away from the Schanzenstrase station which provides close access to most of Hamburgs most popular quarters. The rooms are extremely clean and ample in size – but any other usual hotel amenities (breakfast, for example) are non-existent. Upon check-in, we received a very friendly but confusing explanation on the whole operation: a paper bag of bread-rolls and one croissant are hung outside your door in the morning – a plate of butter, jam and nutella are already stocked in the room’s mini-bar. This is the hotel’s answer to breakfast – ours was to stay up until 1 a.m. on our first night to research the perfect breakfast spot. Luckily, we found one.

Where to eat: Breakfast at Balz un Balz  a cosy, family run rest serves up incredibly tasty, organic, homemade bowl food which tastes even better than it looks – and it looks beautiful! We popped in for a breakfast of creamy scrambled eggs and home-made cheeses and relishes, and an indulgent feel-good bowl of bircher muesli. Simple but so satisfying.

Lunch at  Zweipunktnall. Okay, not very German, but who’s ever too good for pizza? This bright, friendly little find with raw industrial charm of the Ottensen area has a cosy inner courtyard, a daytime and evening social vibe, and neapolitan pizza that is baked to perfection in a traditional stone oven from Naples.

Dinner at Altes Madchen. Move over ‘hygge’ – this cross between a restaurant, bar, pub – the whole lot, knows just how to deliver huge portions of soul-satisfying food, cosy fireplace settings, large dinner tables, buzzing chatter amidst upbeat playlists, and about 60 different craft beers from around the world. The menu is vast, the service is friendly, the food is oh-so-filling, and the drinks will keep pouring. The perfect winter-hideout to cosy up to a loved one with, or toast to a dinner table of friends and family – it’s brilliant balance between spaciousness and that ‘hygge’ feeling we’re all so obsessed with, assures just that.