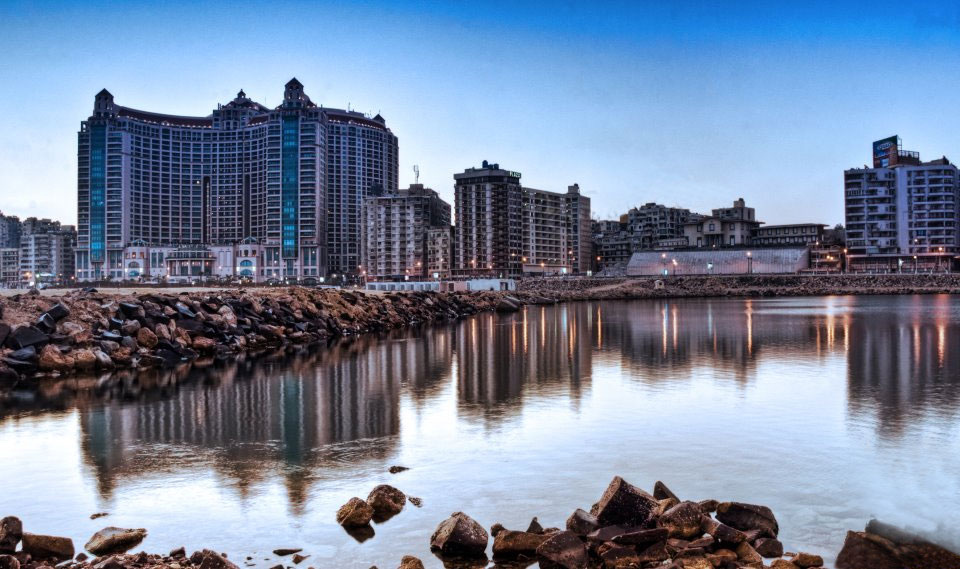 The city of Alexandria, in Egypt, has held a special place in History, not only since it was founded by Alexander The Great, in 331 BC, but also as the host of Ancient Egypt’s ‘Pharos’ – the great lighthouse, one of the seven wonders of the ancient world. This ancient port town evolved into one of the most powerful trade and commerce cities in the world. Its markets were enriched with produce and fabrics from the bazars of the neighbouring Orient region. Magnificent public precincts and royal palaces covered the city. With the wealth, commerce and culture brought in by trade, Alexandria became a centre of the arts, mathematics, history, and philosophy. And with time, it birthed the legendary Library of Alexandria. The Library itself deserves an entire story-telling of it’s own, but in a time long long before computers and code, stood a magnificent, timeless, library, where scholars and rulers from all over the world, would send manuscripts, books and scrolls. It is said that the library held 500,000 books, and that, for his love of her, Mark Antony once gave Cleopatra 200,000 books for it. Although there is so much more to tell; a history of the love-affairs between rulers and queens, the wars of conquest by empire after empire, and it’s home to famed inventors, scientists, philosophers, and artists, I will, for this article, skip to the piece of Alexandria which is most dear to my heart: its home to my heritage. 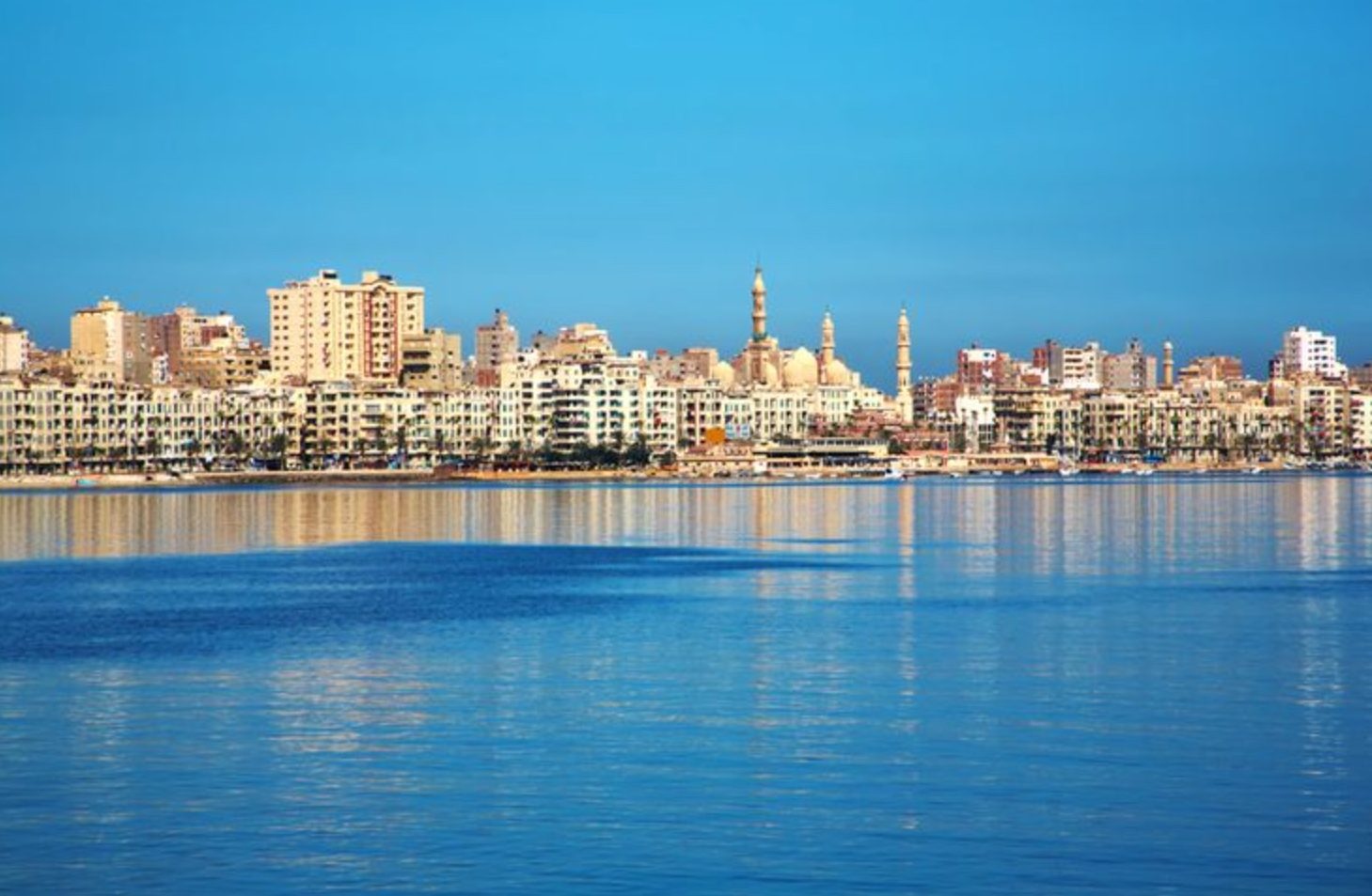 I am often asked why I have not yet covered Egypt in my travel writings. Having visited often as a young child, then not again for several years, and certainly not as a travel journalist – I had yearned to go back and ‘get to know’ the city I didn’t really know as well as I should; the city my father would often tell me tales of, and the city Nobel prize Author Naguib Mahfouz once described as an ‘a city to clean you could fry eggs on the pavements, an Arabic, English, French and Greek speaking city which belonged to us, the Egyptians.”

So, on a last minute trip to return ‘home’ after so many years of missing it, I decided to place aside my ‘stranger-syndrome’ and decided to write about the short visit I would make, through the eyes of a traveler or tourist.

I chose to stay in the affluent, picturesque seafront area of San Stefano, and arguably the city’s best hotel, the Four Seasons. It commands the coastal-facing side of Alexandria’s highest building, and was designed by the renowned Pierre-Yves Rochon. I later learned that he once wanted to be a movie-director, which made perfect sense, as stepping into this hotel instantly and intensely draws you into a parallel time, story and surrounding of your own. Everything feels different; the blend of artistic influences, the homeliness, the variety and vastness of the place, the long spacious hallways and corridors which breathe in the seaside-air just outside, the monopoly of quiet private relaxation and dining areas, and open al-fresco sun-loving restaurants and pool-sides. The hotel, in one word a palace. In a second word a wonderland.

118 rooms, including 39 suites, offer supreme-luxury, whilst mastering the feeling of space and privacy, even during full occupancy. We stayed in a sea-view one bedroom suite, which rivalled any other I’ve experienced on my travels. Pretty much the size of a three-bedroom apartment in London at 100sqm in size, it offers a generously furbished living room and cloakroom which lead onto a sea-facing balcony, which can be closed off from the main bedroom, should you wish to entertain guests from the comfort of your own ‘home.’ The king-sized bed of superior comfort, faces a large open-closet area, and his-and-hers bathroom. The furnishing of the suite itself is so plush and comfortable that it is difficult not to surrender to a lazy stay and bask all day in the luxury of your own room.

The up-side is that there is plenty to leave the room for, soon transforming the struggle from one of not leaving your room, to one of not leaving the hotel. In fact, quite literally, you may not even need to, as the hotel provides direct indoor access to the San Stefano shopping mall, hosting a suite of boutiques, stores, beauty parlours and restaurants. The dining options at the hotel itself are a non-compete, as not only guests, but locals, visitors, and residents of the building’s privately owned apartments flock to the hotel’s six dining options.

Breakfast is served at the bright and airy Kala restaurant, with both indoor and out-door seating and unbeatable views of the Mediterranean Sea.

Byblos restaurant offers middle-eastern cuisine and the most stunning interiors imaginable. Though grand and majestic in design, the restaurant is still somewhat informal, making it the perfect place for a family-dinner or relaxed meal that is all about hearty, local, fresh food, without the gimmicks or overly fanciful fine-dining ambience. We returned to the hotel quite late one evening, and passed by the restaurant to ask them what time they usually serve until, their answer, the epitome of Egyptian hospitality: for as long as you’re dining with us. Another party arrived shortly after us, to be greeted with the same welcoming charm, assuring me that the hotel’s ethics is universal and effortless amongst it’s staff.

Another firm favourite amongst any diners at the Four Season is Stefano’s – a more more formal, Southern Italian restaurant, with dimmed interiors and plush seating. An open kitchen and long cushioned seating adds more of a buzz and ambient vibe, whilst huge portions (beware), and rich flavours make for an Italian dining experience with the added Egyptian twist of ‘more is always more’.

The remaining options are aplenty; including Fresca, an informal cafe/restaurant which opens out onto the city’s streets and an all-day sound-track of Alexandria’s traffic! Again, you will find residents and locals alike unwinding at the end of the day here with shishas, light bites and desserts, or popping in during the day for a quick coffee or scoop of ice-cream from their gelateria!

Last but not least, Bleu Bar, is a terraced outdoor lounge offering a cascading view of the city streets and seafront, offering a more bar-like vibe, is the middle-ground between Fresca and the indoor restaurants, offering shisha, cocktails, and an impressive Modern-European menu.

All this is not to mention the beach bar and restaurant, the pool bar, and my favourite: the hotel’s huge lobby-lounge, complete with all comfort-levels of armchairs, fireplace, and of course, because this is Egypt after all, where feeding people is simple courtesy, an all day dining menu. 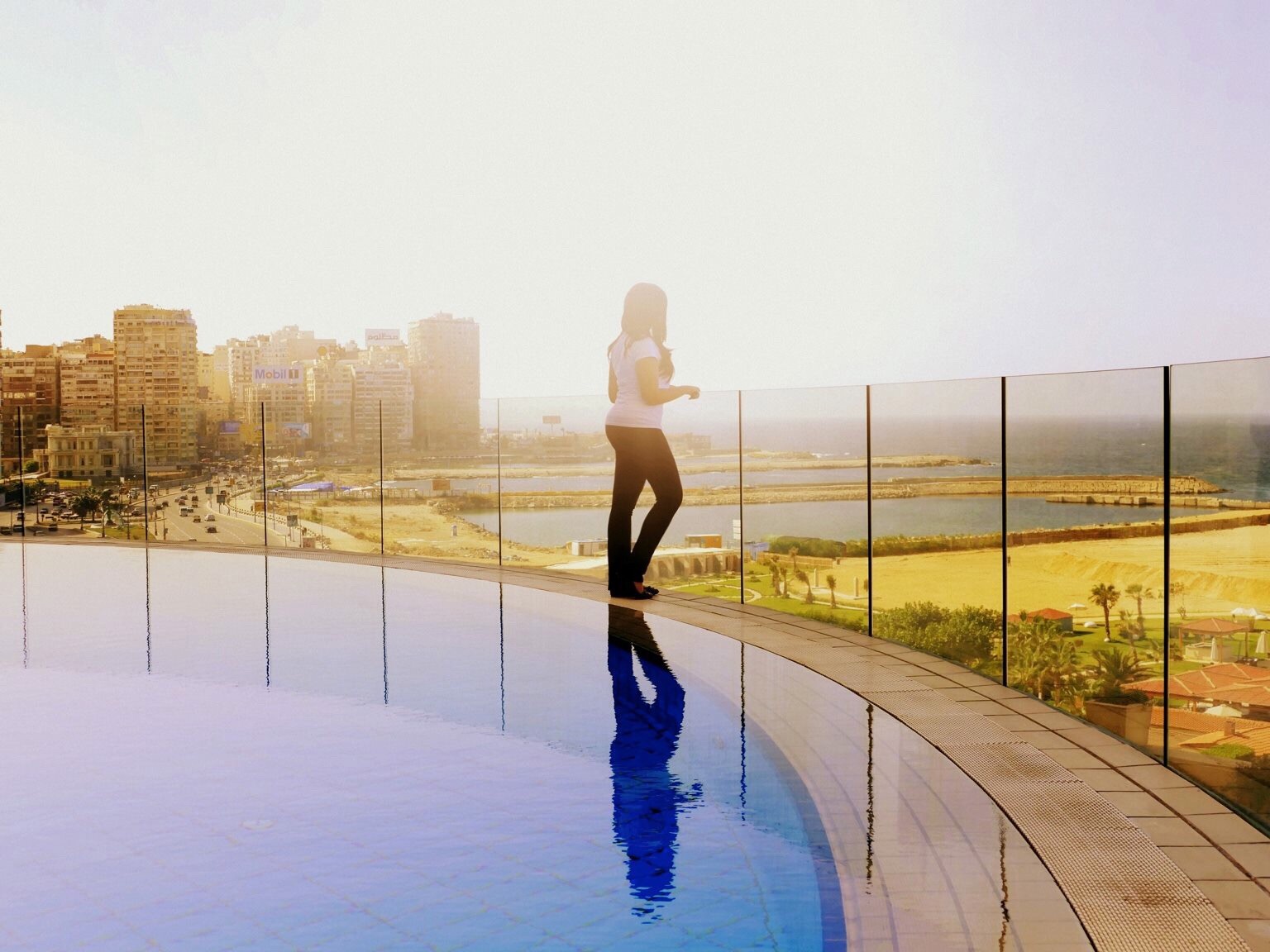 In tune with the hotel’s love for all-encompassing choice and luxury, the Pool, Spa and Gym are of exceptional mention. Offering non-residents a membership to their wellness facilities, makes complete sense, once you’ve experienced the health-club like offering at the hotel. With large in-door and out-door pools, a fully equipped gym offering personal training which, unlike most hotels, actually represents a real-gym, saunas, steam rooms and jacuzzis – the hotel has it all. The SPA is well worth indulging in; and along with the usual array of massages and treatments, boasts a signature Egyptian ‘Cleopatra Milk Bath’ to leave you looking like the royalty you already feel like during a stay at the Four Seasons.

My personal-bias before visiting the Four Seasons San Stefano was loaded with two potential outcomes; I would either leave with my unrealistically high expectations unmet, or with an affinity and attachment to match those expectations. As an avid traveller, who has visited many a luxury hotel, and private island, it is truly with as little bias as I can muster, that I can call the Four Seasons in Alexandria one of the best I have ever stayed in. If not for the luxury, or the dining, or the relaxation, or the ocean-views, then at the very least, for it’s dedication to be outstanding. Throughout my stay, I often found myself walking around in awe and wonder at the painstaking detail to the hotel’s interiors, painted walls, tapestries, and ornaments. By the end of my stay, I understood this dedication to detail a little better. This is a hotel which is not simply interested in ticking off all the usual services and amenities of a 5* hotel. This is a hotel which has understood Alexandria’s character and history perfectly; history, antiquity, art, culture, and most importantly of all that undeniable Mediterranean Seaside air.