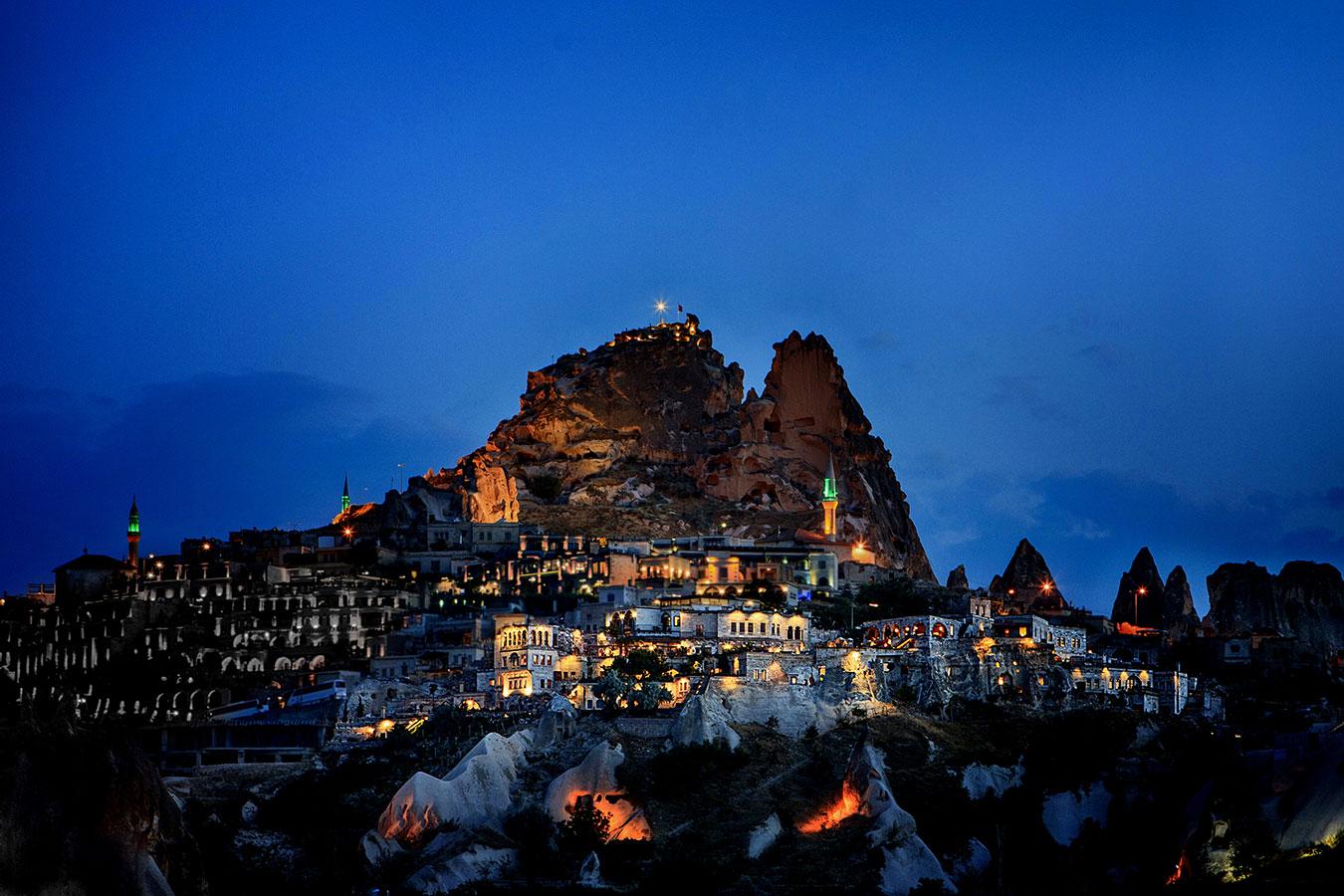 Hashtag Life visited the mesmerising Museum Hotel, Cappadocia – Turkey’s only Relais & Chateaux Hotel. We discovered an ancient time-capsule, and a residence so true to it’s history, we couldn’t help but fall in love. Museum Hotel will long reside in our memory, as that magical place we go to in our minds, to relax.

We visited Museum Hotel in Cappadocia and I can safely say that we have found the inside of an Enid Blyton book. For anyone not familiar with these, they were the ultimate fairytale story books for any 8 to 10 year-old or in my case 12 and 13 year old because I refused to let go of these magical lands and tales well into my teenage years whilst all my peers were learning how to use eye shadows, get top scores playing snake on their Nokia phones, and of course, text boys. In hindsight, it is perhaps all the reading under the covers at bedtime when I should’ve been asleep which has today rendered me a non-stop writer. Whatever the reason I am grateful for every sequence of events which led me to visit Cappadocia last week.

Cappadocia, is an ancient Anatolian region of Turkey, and it’s name continues in use as an international tourism concept to define a region of exceptional natural wonders, in particular characterised by fairy chimneys and a unique historical and cultural heritage. It was originally named Hatti, and ruled by the Hittite Empire in the late Bronze Age and was then ruled by the Persians. After the end of the Persian Empire, Alexander the Great tried to rule the area but instead a Persian Aristocat became king o Cappadocia. It became part of the Roman Empire at around 90 BC and then lastly the hiding place of many Christians in the early years of the faith. It’s history is so important because it explains the wonder of Cappadocia’s structure; several underground cities populate the region, such as Kaymakli Underground City, used largely by early Christians as hiding places before it became an accepted religion. 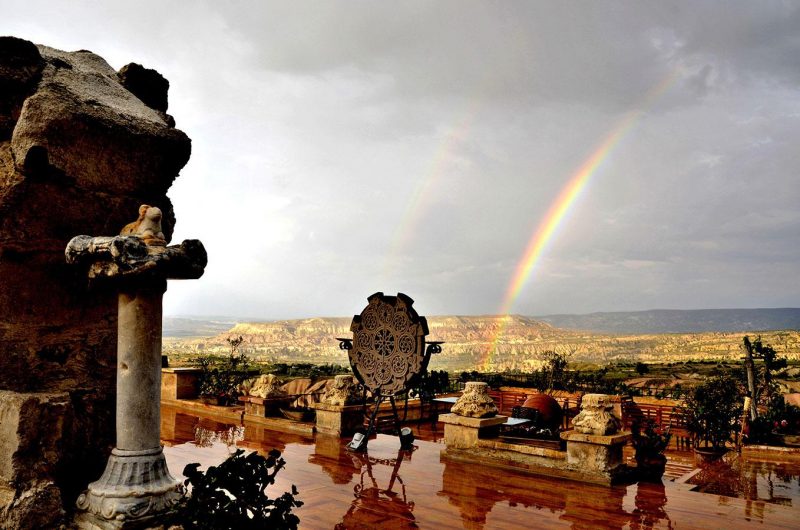 We hopped on a plane to Nevsehir, one of the cities of Cappadocia, via Istanbul – a short one hour journey – to the land of hot air balloons, spectacular pillars of sedimentary rocks, and minaret-like forms, carved out houses, churches and monasteries from the soft rock of volcanic deposits.

My favorite part of any journey to ‘destination new hotel’ is that where the taxi winds up and up and up. This always asserts for my excitement one thing: that we are in for a spectacular view. We passed by a few hotels, but I knew that ours was higher still, as we only drew to a stop once we had reached the point where all the views you had taken in on your way up were now landscaped into one wide canvas before you. It is truly something as you behold all of this ancient little city and the scores of cone like fairy chimneys which dominate its rhythm. Museum Hotel, an exceptionally presented Relais and Chateaux hotel, is aptly named, as it is a result of the owner Omer Tosun’s passion, an antique collector with a varied collection of pieces from various stages of Turkish History. Museum Hotel’s display of stunning historical artefacts and costumes around the hotel, allows their guests to experience Cappadocian Culture in every way, as it creates a live and mesmerizing museum around you. All the rooms, suites, the Lil’a restaurant, the reception and all the outer spaces are decorated with valuable and in many cases priceless antiques.

Indeed, our room is something else: we were led to it by an extremely friendly member of the concierge team; Asif. He had our excitement bubbling over, as he told us we were being given his ‘favourite cave.’ They say ‘cave’ here and not ‘room’ – because, in case I hadn’t mentioned, the rooms are actually caves. Hundreds, and even a thousand years ago, when the Anatolians lived in Caves, they carved out these structures which have remained till today and been transformed into wondrous hotels, lodges and residences. It is illegal, he told us, to knock any caves down, as well as ‘build’ artificial ones to replicate the look. So as we stepped into our real-life ancient cave, named: “Tekelli” which translates as “Gypsy”, a name quite apt for yours truly: an avid and endless traveller and wanderer, we were led down a flight of stairs into the below-ground-level suite. I gasped, not sure whether to look ahead, to the left, or to the right. The room is structured as such that you immediately step into a massive ‘living room’ – in a glass cabinet, true to the hotel’s ethos, is an intricate and colourful antique garment which would have been worn by the Anatolians. Within this room there is to the far corner a large, three-to-four person Jacuzzi tub (although I am sure the label recommends no more than two!) by a window with beautiful views. We’re told that in the mornings you can see the hot air balloons rising in the distance from the comfort of your Jacuzzi. I made a mental note to try it – even if it meant waking at 5 am to sit in a giant bathtub. The room winds into an open-plan bathroom stocked and stacked with L’Occitaine products, reminding you, if you were momentarily fooled by the historical structure of the room, that you are in a Relais and Chateaux residence after all! That’s precisely one half of the room – the half you could fit a small kindergarten class into during nap time.

The second half of the room, accessed through a small arch-way in the cave, yields a beautiful and inviting king sized bed. Towards the window there is a seating area with arm chairs over looking again a stunning view, and a ledge which I’m sure you’re not allowed to climb onto, but seemed to scream an invitation to do so anyway. The room is clearly, incredibly spacious; but above all it is rustic and comfortable. The beds are lined with some sort of sedative because the entire stay consisted of us fighting our bodies’ urges to sleep for the whole day straight. On the second day we couldn’t take any more and started googling profusely what sort of magical sheets they were using here: Sateen apparently. A lustrous 100% cotton type of sheets woven from combed, carded, or long-fiber cotton threads, rival to the traditional Egyptian-cotton, and something I have been ordering plenty of off Amazon prime since my return. Our bed was so soft, I can still remember the feeling now. Add to the comfort the amount of style and creativity which has gone into the design of the rooms; some have wine taps (see picture, in order to believe it) some have Jacuzzis, and so did we actually leave the room, you wonder? Just about, yes.

Although the hotel is small, it is abundant: it’s outdoor thermal pool, heated to 26 degrees, is over-looked by an openair stone-house structure with comfortable, cushioned seating areas, and where music plays in the evening. Dotted around this is the breakfast terrace and dining hall, where we would sit and gaze at the stunning views of the town beneath us each day, and greated by an exceptionally bubbly Arzu – whom, a simple dose of each morning, would challenge even the most pre-coffee-grump or non-morning-person to crack a huge smile. Everytime we spoke, I half expected her to launch at me with a hug! By the end of our stay – I sort of wanted to ask for one. They also have a beautiful garden with an actual Peacock. I didn’t realise this until day three, when I peaked my head onto the lower part of the split level terrace to try and understand what on earth this noise was, which had sounded like an angry cat for the last three days – it was a peacock. I forgave it, only as it was so beautiful – and it even fanned its feathers for us in return. The breakfast was over-flowing, varied, and healthy – except for these amazing flatbreads which we seemed inclined to eat at least two of every morning (each!). A lady by a wood-oven rolls out a thin fresh base of dough for us, fills it with a choice of toppings from veggies to meats and moreish, perfectly meltable Turkish cheese, folds it in two, and heats it on the open wood-oven till crispy. Delicious. I asked twelve times what it was called – and have forgotten all twelve times. For now – lets call it Turkish Breakfast Pizza. Food of the Gods.

My only disappointment was the evening on which we dined at the beautiful Lil’a restaurant. Although the service was as friendly, warm and efficient as it had been during our entire stay – and our waiter in particular was informative, attentive and energetic – our dishes emerged as pre-prepared and re-heated, made obviously when we tucked into our lamb shank to find it freezing cold at the bone.

The entire stay however is made perfect, by the illustrious surroundings which nonetheless keep true to their ode to the history of Cappadocia. You are sure to experience Anatolian culture in everyway possible – with a team who feel like family at hand to help you organise as creative or traditional an itinerary as you might like. If there are a few words I can use to summarise Museum they would be: Ottoman splendour, priceless memories and magical surroundings. 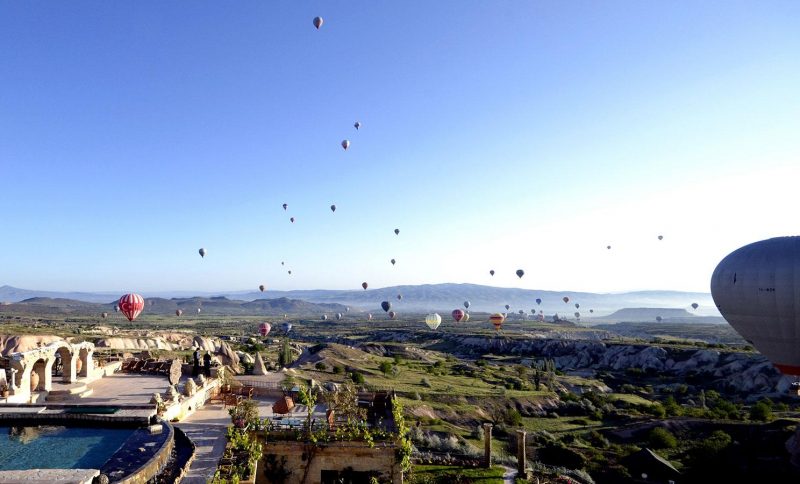