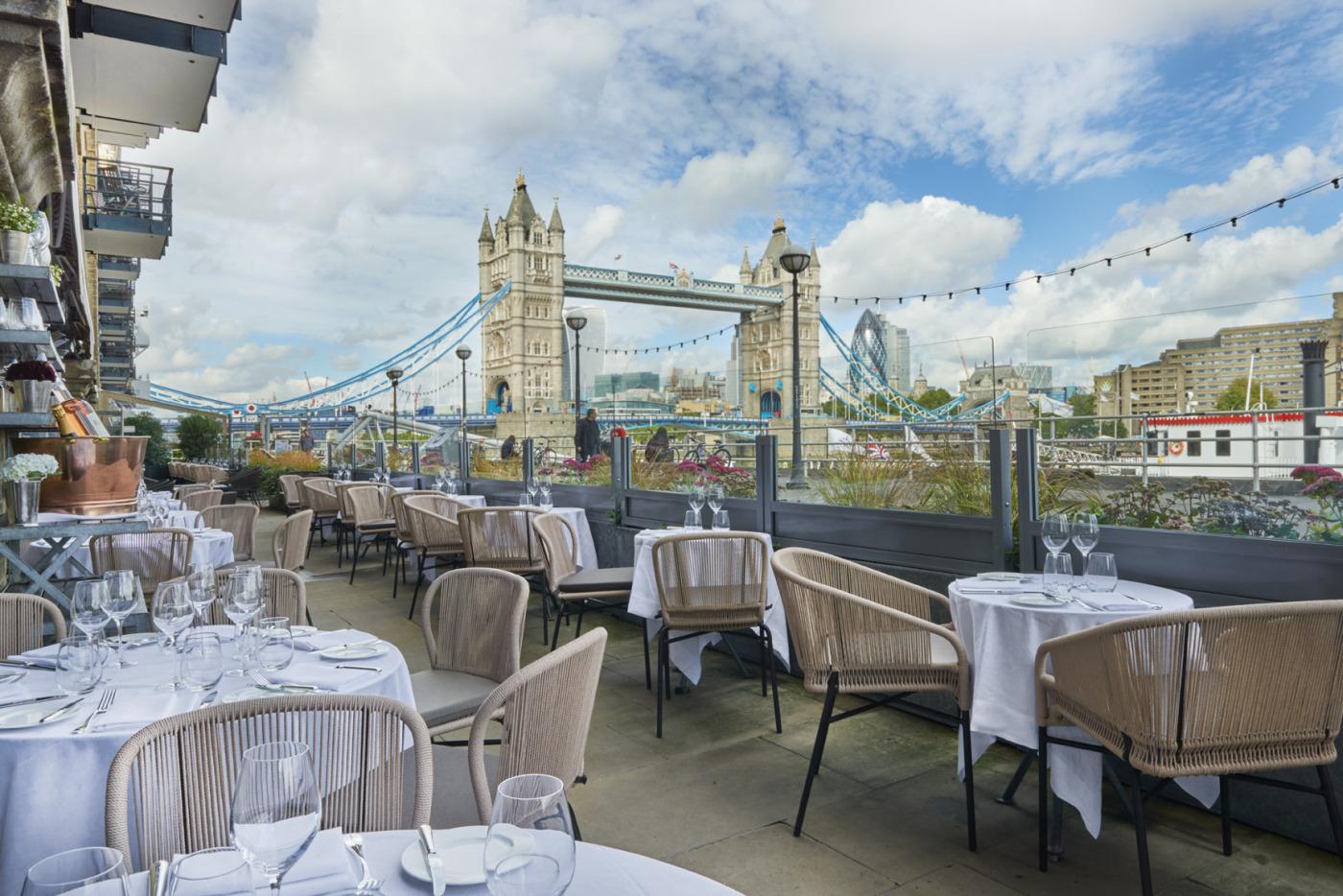 We visited the frankly stunning Pont De La Tour Restaurant in Tower Bridge, London, with the most beautiful views and intimate interior, for a spectacular Caviar Dinner and info session with King’s Fine Foods. Read more below about the delicious dinner and what we learnt about Gordon Ramsay’s take on Caviar (swear-words excluded!)

The D&D Group infamously run some of London’s best restaurant. I go gaga for the illustrious, fun, and maze-like Bluebird Cafe in Chelsea and this week I was made weak in the knees by Le Pont De La Tour in London Bridge.

The restaurant, an elegant, 19th century former tea warehouse alongside Tower Bridge, serving classic French Cuisine, quietly and effectively transports you to another time once you step inside. The dark wood interiors, smooth surroundings, rich lighting with low ceilings, and beautiful floral arrangements encapsulate the feeling that you are certainly close to the water. There is an air about the restaurant that feels as though you have been taken to a 1920s dinner setting on the Titanic. Pass the dining room and kitchen which over looks it, and the restaurant winds into the most fantastic wine cellar and cigar room. Onwards still, are the private dining rooms, where the evening we were attending – A Night of Caviar by Kings Fine Food – was being hosted. 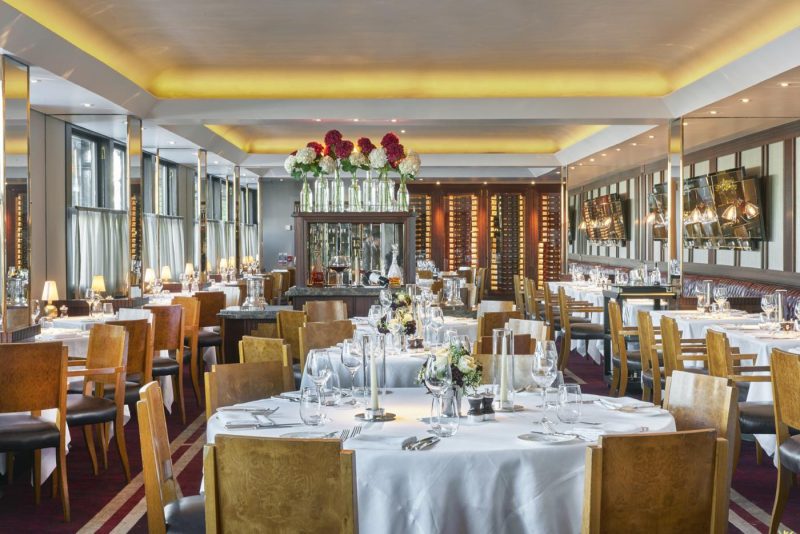 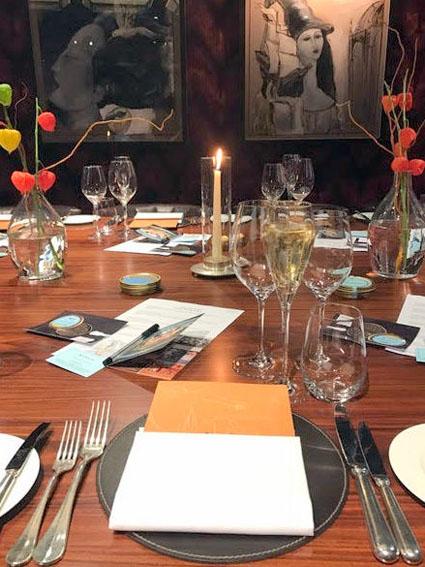 The dinner table was laid out exquisitely, with glistening mother of pearl caviar spoons awaiting us amidst the information leaflets placed at seat. The evening began with a Caviar Masterclass where a Kings’ Fine Food representative, Holly King, would guide us through four different types of Caviar (one of which I was pleased to learn is sourced exclusively from Sturia’s farms, whom we visiting in Bordeaux to learn about the incredible world of Caviar Farming). But first: Gordon Ramsey’s take on sturgeon farming of course. This involved watching a clip of the mastermind and self confessed caviar-lover taking a visit to a caviar farm in Bulgaria, because in his own words “I’m not going to find the real deal in f-ing Knightsbridge.” Everyone around the dinner table giggled as we acclimatised ourselves to the obscenities which would follow for the rest of the clip.

We observed Gordon get up close and personal with the sturgeon, in the lakes in which they are bred under optimal conditions and even select one which was 11 years old and seemingly ready for caviar extraction. Back in the lab, they open up the sturgeon to reveal over a kilo of Caviar. Gordon bravely tucks right into a taster, without washing away any residual entrails or even salting the caviar and exclaims that it is “f-ing fantastic but needs more salt.”

So without further ado, we turned our attention to the four samples from Kings’ superior provision of the caviars they procure. The first was Kings Beluga, considered the king of Caviar and quite rare because it takes 12 years to produce. Steely grey in colour, it is often the largest egg with notes of walnuts and cream and hints of both the sea and finest quality salt. We sampled a taste of this on the back of our hands: seems as the most in-obstructive way to sample the caviars true tasting notes. Next we’re the Kings Oscietra, whose eggs are produced after 8 years and yield a beautiful golden brown colour. This caviar, probably my favourite of the evening, was nutty and mellow in flavour and developed a butter sweetness on the palette thereafter. Next we sampled the Siberian Sturgeon caviar, which is 5-6 years old when it produces its eggs. With a more intense flavour than Oscietra, often long hazelnut notes, this is one of the most commonly farmed sturgeons as it produces its eggs relatively quickly. Lastly was the most creative sampling of the evening. A take, by Heston, a few years ago which I will call: Caviar a la Milk Buttons. Heston, in one of his recipes decided to pair caviar with white chocolate and so this is what we would do now with the Kings Imperial caviar which has a delicate but intense almond cream flavour. The result is quite aromatic and the caviar really comes through on the nose. It was a sure winner for me, although I’m not certain when again I will be having caviar covered chocolate for dessert. We heard a lady seated across the table ask our guide what to do with it as a chocolate button was placed in one hand and a smear of caviar on the other. “So we eat it together??” she clarified through her confusion. Holly responded gently, clearly used to this reaction with a reassuring “yes, it’s just a little experiment.”

With the experiment ending in no disasters or plates being smashed, and in fact quite a pleased consensus all around, it was time for the three course dinner prepared by Le Pont which would be led by an entree of even more caviar! The starter was an extremely tender Paupiette of Sole Fish artfully folded in a flower shape with an intense sea herb butter sauce trickled around it, and a spoon of caviar placed delicately on top of it. The result is a melt in mouth, strong yet structured melange of flavours, beginning with the creamy taste of the caviar and evolving into the moreish flavours of the sole paired with its rich butter sauce. The main which followed was “poulet noir” – considered a delicacy, as the black skinned rooster which yields a more tender, succulent and tasty equivalent to chicken. Although this didn’t quite come through for me, the wild mushrooms, and cream of mushroom garnish which accompanied it produced a flavoursome and balanced plate which followed very well from the rich starter which proceeded it. The dessert; a plum tart with hazelnut ice cream was exquisite! Beneath the layer of succulent sliced plum was a Grenache of chocolate cinnamon and hazelnut which simply put: made me gooey on the inside. So moreish, not too sweet, not too dark, each ingredient melted into its neighbouring ingredient, topped with a spoonful of creamy hazelnut ice cream to seal you into your happy place-comme-food coma. Bliss.

The evening, a real success, was effected with such class and conviviality that I would do it again and again. Le Pont de La Tour has a sophisticated ambience without being stuffy in the slightest, and most of all, an absolutely stunning setting. As we walked through the main dining area to go outside and stare at the night views of tower bridge, we passed by several of our dinner party who had now taken up seats at the bar to continue their evening listening to the beautiful jazz sounds of the live music which had started in the restaurant. The night really does seem to go on at Le Pont De La Tour, and their welcoming, happy, warm nature seems the perfect fit for many a winter dinners in the months to come. 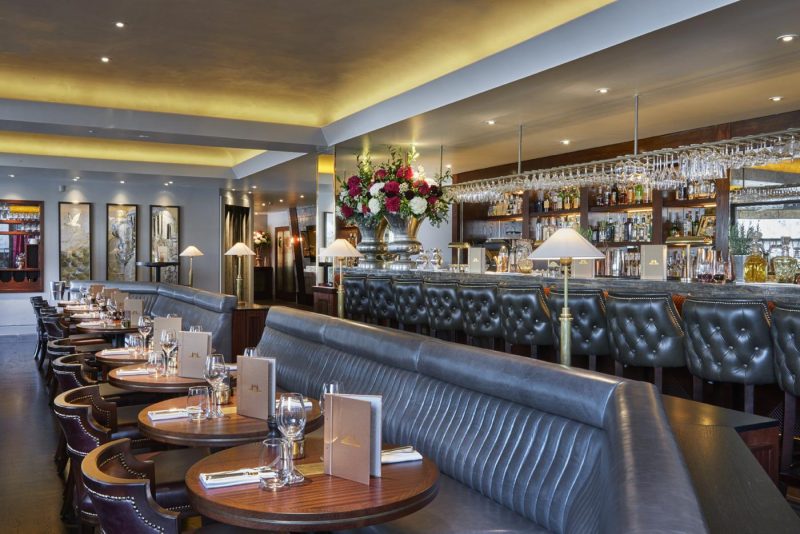