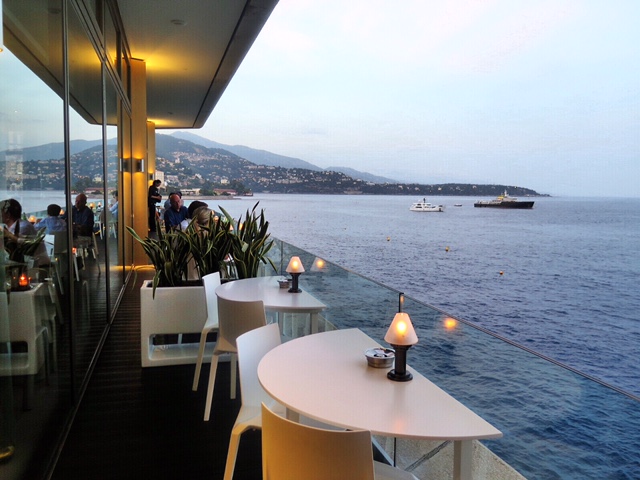 Hashtag Life Meets the one and only Chef Nobuyuki Matsuhisa for an exclusive one to one interview, at the newly launched Nobu Restaurant in the French Riviera’s Fairmont Monte Carlo

Last week we had the pleasure of meeting Chef Nobuyuki Matsuhisa – known to the world simply, as “Chef Nobu”, at the Nobu Monte Carlo, in the Fairmont Hotel, Monaco.

I asked Chef Nobu what brought on the inspiration for the Nobu of Monte-Carlo and how it carried the Nobu vibe and outlook of it’s sister restaurants across the globe. Chef Nobu told us that the vision for this restaurant came to him as a beach-set Nobu was proposed, similar to its sister restaurant in Malibu, which also dons stunning beach views. Although this restaurant doesn’t match the typical interior architecture he would envision with such a toned down decor, the ambience is brought alive by friendly staff and the tranquil balcony overlooking the French Riviera’s still, deep blue waters. 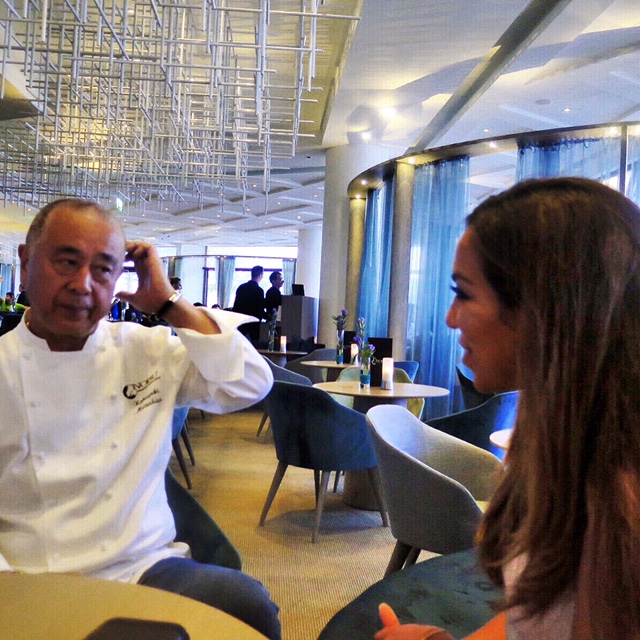 We sampled the menu at Nobu Montecarlo, which offers everything from the signature dishes we all love to love such as black cod and new style sashimi, to homely specialties drawing on locally sourced seafood such as the favoured dorade fish of the region.We took a seat on the balcony terrace which allows you to people watch within the restaurant and inhale the fresh scent of sea water from the deep blue ahead. Even at night, with the dark sky dimming the view, one can hear the motion of the waves as you sit back to embrace the quiet elegance of this well-positioned restaurant.

To ease in to our dinner, Laetitia our hostess, recommended the bar-man’s signature cocktail ‘Sunsplash’: lemon vodka, prune liquer, limoncello, and homemade passionfruit juice made for a cool refreshing and moreish drink. And so, I had two, whilst secretly pining for twelve. We started with a light dish on the palette; salmon sashimi, sesame oil, watercress, yuzo (an Asian variety of lime), chives and olive oil, all perfectly presented in the form of a flower, representing the fragrant light zing against the soft, melting strips of salmon. Gone as quickly as it had emerged, this delicate, tasteful plate is a must for any diners seeking an excellent take on sashimi. As if our prayers had been answered, the next plate we sampled was the tuna sashimi with matsuisa sauce, a japanese mustard, extremely zesty and tangy, complimented by the shockingly soft texture of the fish against the crunchy salad.

Next, was the hot crab tempura, served in a big blue bowl and balanced both figuratively and literally by cool cubes of watermelon and a deep ponzu sauce. The contrast of piping hot crisp tempura and the flakes of crab meat within it, against the crunchy, cool, hydrating watermelon, finished by the bitter and slightly chilli tang of the ponzu sauce, is utter genius. Every now and then, in the heat of a moment, your reflexes mar your snap judgement. Once you’ve come to – it can be a mere moment later, or upon retrospection – you deeply regret your impulse actions and simply ask yourself ‘what was I thinking?!’ That is pretty much what happened when a waitress came up to us with a second bowl and asked ‘Hot crab tempura?’ And I responded ‘Oh no we’ve already received it thank you’ pointing at my empty bowl. Confused, she replied ‘So you do not want this one?’ Of course I wanted it, but my conscience was in full drive as I whispered ‘No, thank you’ whilst the internal kicking of self mechanism started to operate. Turns out I didn’t need to kick myself, as my dining companion was more than happy to do it for me.

The black cod was our next and final dish, and nothing to write home about. I’ve always wandered how interesting you can make black cod, for the 300% inflation it comes priced at, and just when I think it is no more than sweet, sticky cod, I am blown away by the dish, as with my recent visit to Sushi Samba, London, and the love affair is reignited once more. The dish at Nobu was the antithesis to this scenario, so I would certainly opt for double (or triple) dipping into the tempura than this signature plate from Nobu’s otherwise inventive and expansive menu.

We chose not to stay for dessert, as my guest and I reminisced the more welcoming vibe the Fairmont Montecarlo itself has in it’s lounge and bar, which we have been visiting for over a decade. Concluding that we would much rather sip on tea and tuck into an indulgent dessert, on a comfortable couch, like the true Brits that we are, we excused ourselves from the beautiful views, and the elegant charm this restaurant does bare, even if it does somewhat resemble the age old cliche of that beautiful woman who’ll allow you to observe and admire her, but not quite enough to speak to her.