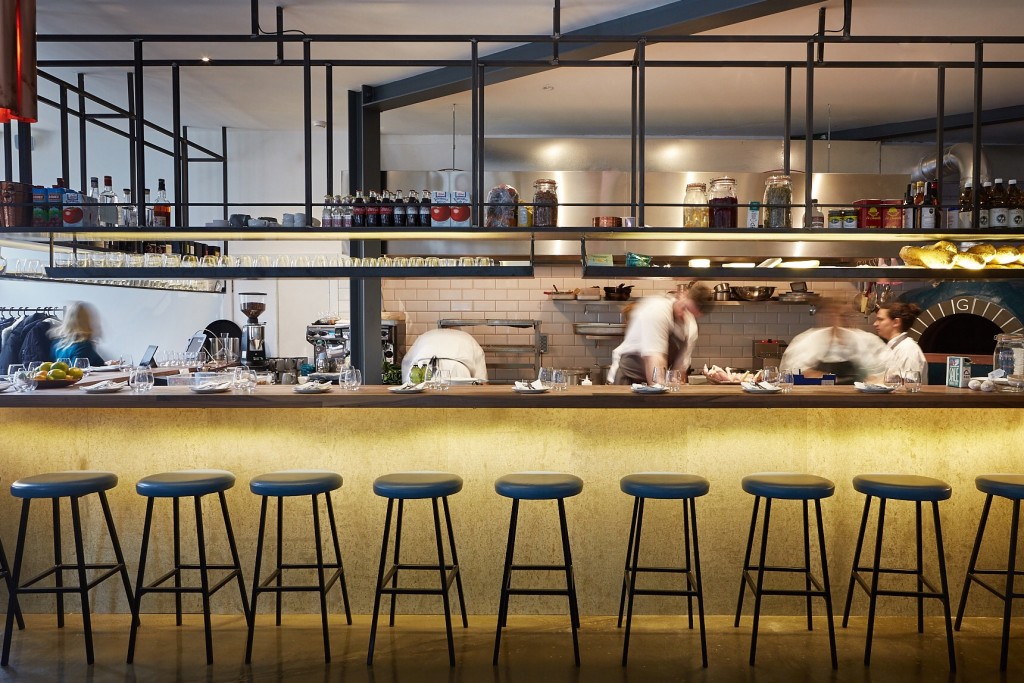 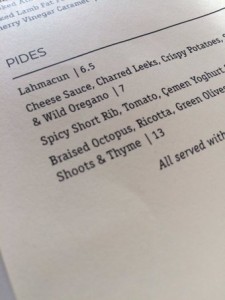 The problem with visiting Oklava, when you’re Egyptian, your company is Armenian, and the Chef is Turkish; is that it sounds like the beginning of a bar-joke. We spent the first fifteen minutes, after having been seated on a high stool, at a high table no greater than 20cm wide, by the heavy set of entrance doors which would ever so hospitably welcome in gale-force winds as visitors came and went, debating which of the Turkish dishes, were in fact, of Armenian or Arabic heritage (I’m told, and am inclined to believe, that it is not Turkish Lamacun as much as it is Armenian Lahmajoon, which if you want to complicate further can be translated from Arabic and Pharsi into “dear meat’ even though it actually means ‘pizza’). Touchy subject. Yet, it resulted in no plates being smashed. Those are the problems with visiting Oklava; depending on how late you book, your arteries may freeze, and depending on your debating skills, you may win or lose the “whose ancesctors made it first” game. What is left, is to rave about the entire menu, but I’m told I need to be concise.

I had cheated a little with this restaurant and read a review before visiting for mine; in fact, it was how I first heard of Oklava. The greatest appeal lay in the fact that Oklava boasted a combination of many of London’s finest features nowadays; it is a melting pot of cultural influence, although very much a restaurant by appearance it is technically a ‘pop up’ and thus represents the street-food culture which has defined the city’s most popular eateries, and, my favourite quality: no one was talking about it, yet. By that, I refer to those ‘healthily’ competitive relationships you have with people, where you irk a little if a during a conversation someone begins to recommend to you, one of your favourite places.

With Turkish Cypriot heritage influencing her dishes, Selin Kiazim focuses on communal eating and encouraging conversations about food by sharing dishes between diners. She is inspired by flavours from travels; which is certainly translated into the varied palate she cultivates through each dish, and pushes traditional boundaries to produce tantalising, creative dishes, and to pull Turkish Cuisine out of the Kebab shop and into the London Restaurant scene. And truth be told, we had to squint to find the word “kebap” on the menu. 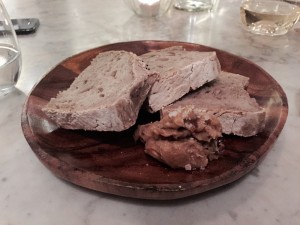 The restaurant manager had recommended as she presented us the menus that we order two-to-three dishes. I pretended I hadn’t heard her, when my company asked me for confirmation of the number, because I feared she meant two to three dishes in total, not each. Glancing at the menu I knew this would be impossible. He then proceeded to call her over for clarification anyway, and much to my relief, it was in fact ‘each’. We began with the warm bread with medjool butter. The lady taking our order explained that they offer bread regardless, yet I needed to clarify twice, if that would still mean I got to try the butter, only for her to answer ‘yes, it’s only on the menu if you really want more.’ One sheepish grin later, I proceeded with the rest of our order.

The medjool date, salted butter is best described as akin to licking the icing off a salted caramel and date flavoured cupcake. Swiping healthy dollops across the warm bread was just as satisfying as scooping it off the cupcake with your finger, but not nearly as much as letting the caramelised buttery taste melt on your tongue. If it wasn’t for the rest of the menu I would have happily reordered the medjool butter until I made myself positively ill. We complimented this with the grilled halloumi, london honey, and oregano which added a more savoury, zingy, edge. 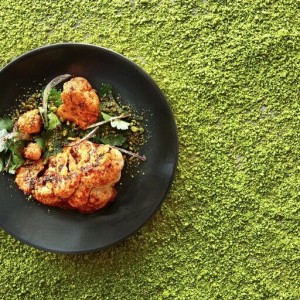 Our next ‘small plate’ (they are not small), was the Chilli Roast Cauliflower, Red Onion, Parsley and Pistachio. My inner child still occasionally scrunches up its face at the thought of cauliflower, but in this age of healthy-food-creativity where the stuff has been successfully ground down and reproduced as a substitute for rice, I was curious to discover how Selin would turn this into an innovative and tasty dish. As I munched away on my Cauliflower, I was told by my company that I was ‘eating it wrong’ and ‘hadn’t tried it until I’d tried it with everything.’ So swooping up all the ingredients up into one mouthful, the pistachios added a crunch, the parsely it’s crisp flavour, and the chilli paste added a little moisture to an otherwise dry, but very intricate dish.

The baked lamb fat potatoes, halloumi, fried-duck egg, and sherry vinegar caramel (which really, just tastes like balsamic glaze), followed. I’ve heard that this dish is basically the world’s best hash-potato, and whereas potato as an entity is my ultimate comfort food, I wasn’t blown away, perhaps because the balsamic glaze dashed all across the dish interferes too much and is slightly misplaced amidst the tastes of yolk, and the lamb-infused potato.

The Octopus pide (the turkish form of a cross between a pizza and a calzone) is a tour de force. Chunks of soft and succulent braised and grilled octopus line the pide; a crispy, floured base, made perfect by the addition of feta cheese for the savoury and a honey glaze for the sweet touches to this dish, very much a homey comfort-food minus the usual guilt.

Struggling to allow for any more food, I had begun to wish that the original recommendation was indeed 2-3 plates in total. We closed our meal with two stellar dishes which you should certainly save (or make) room for; The Chilli-Garlic Chicken with Za’atar Crub and Lime Mayo and The Crispy Pomegranate Glazed Lamb Breast and Yoghurt. The chicken, I struggled, relentlessly, through, as it was the best I have had of a meat I am otherwise tired of. It is barbecued and glazed in a sweet, sticky probably unhealthy but thick and supreme sauce, and then coated in a mixture of herbs, very popular in middle eastern cuisine, called “Zaatar” – think of it as a zesty version of oregano. There is an obsession, currently, amongst foodies to refer to each restaurants chicken dish as their ‘KFC” “Krispy Fried Chicken” and I recently read the same of this dish at Oklava; except, it isn’t fried, and it is far more glorious than it’s greasy Kentuckian counterpart. It is a moreish, slightly dry but never mind, delicious dish, which puts chicken back on the map for me – a feat I had begun to think impossible.

Attempting to eat the lamb thereafter was near torture as I was so full, but if, feeling like I was being force-fed, I can still report that it was absolutely delicious, then I knew I would be craving it again in hindsight. The layers of crisped lamb, resemble a crispy pork-belly dish, in it’s cooking style, and the dish is extremely succulent and moreish; the yoghurt adds moisture in the nevertheless slightly dry, pasted, manner which Selin employs throughout her dishes, so as not to dissolve the preceding tastes of each piece, whilst the crunch of the crisped meat along with the juices of the slight fat seal this plate as very much a high note to end with. 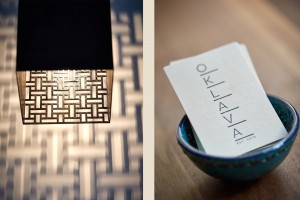 Glancing around the small, intimate space, feeling as though I was ready to topple off my high chair, I recounted the first review words which had drawn me so much to Oklava: ‘We were eating until we had to surrender.’ I now understood that this is what Selin does to all her guests; I felt like a captive. It was warming to see many Turkish guests at the surrounding tables; a testament to this innovative, neo-cultural Chef’s ability to stay true to her Turkish heritage, whilst also true to the testament that the infusion of neighbouring cultural influences, is in fact the new spice of life; and certainly that of London’s food scene.