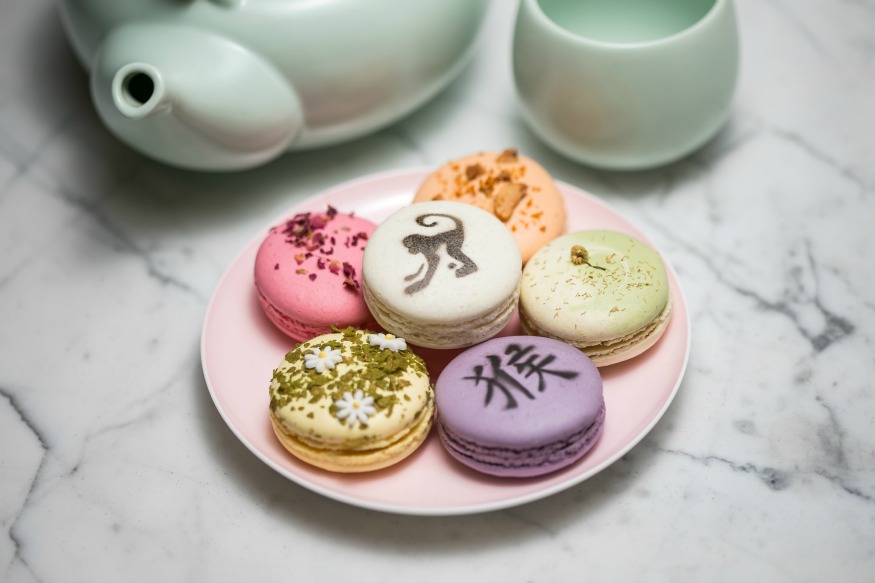 It is the morning after our visit to Yauatcha and I am still full. I am also, despite my fullness, craving chunky fried shrimp at 11am. The culprit for the complete disorientation between my stomach and my palate, would be the Chinese New Year menu at Yauatcha City. Situated on multi stories of the mini arena-like setting outside London’s Liverpool Street station, February bears the special treat, where the restaurant lights up its outdoor surroundings with red lanterns around the circular restaurant. It is a sight to behold, and one I stood almost absolutely still for. I say almost, because moments into my romantic affair with Yauatcha’s exterior, I found myself being shoved off my feet. No, not by angry bankers and city-folk, storming by in their usual rush; but by the gale-force winds that have been gusting their way through February to replace the usual snow and impending panic of a city which is perpetually unprepared for – and shocked by – adverse weather conditions.

As I stop flirting with the lanterns and scurry on inside, I feel as though I’ve stepped into a secret club. Everything is pristine and perfectly aligned to the Chinese influence, design, and archetypes you would expect. It is calm and peaceful. For such a large, winding, multi-storey restaurant; Yauatcha maintains exactly that – calm and order – so effortlessly. You feel as though the guests around you are ships in the night, or actors who’ve been hired to look incredibly happy, full, relaxed and at ease, with minimal noise emanating from their tables. Of course they aren’t, but such is the atmosphere that the Hakkasan group are so expertly able to create in each of their venues. 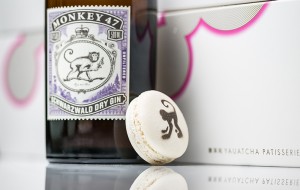 As we walk up stairs to be led to our table, I pass the infamous Macaron counter. I seal my eyes shut and reassure myself that their time will come, to stop my inner eight year old from placing my hands on the top of the counter, pressing my nose down to the glass, and picking out the colours and flavours I want, and want NOW. 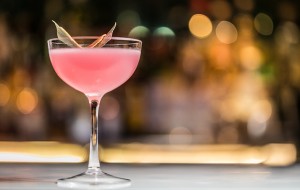 A charming gentleman, Anthony, lays out the Chinese New Year menu before us and runs through the descriptions of each plate. In absolute honesty, the menu is a complete list of every dish I would not order at Yauatcha; I so easily concede to guilty pleasures (what here on the menu isn’t a guilty pleasure?) and typical favourites. What followed was a three hour tasting experience of all the reasons that anything Yauatcha wishes to serve, will have you reassess your tastes and preferences, and asking them whose side they’re on. They know what they’re doing here. 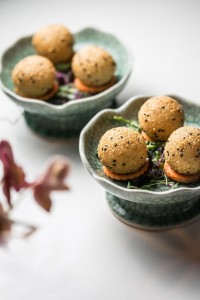 We begin with the puff pastry and foie gras. I always feel pangs and pangs guilt eating the stuff as (although we’ve all done it to ourselves with many a take out or dominos pizza, after a break up, on a Friday night, instead of going to the gym, or when Olivia Pope breaks up with Fitz – if you aren’t a Scandal fan, shame on you – etc etc), force-feeding geese is just unfair. This guilt was soon offset by biting into the pastry itself; layers of perfectly soft whilst slightly crisp, doughy, buttery pastry crumbled and dissolved with each bite. If you are a “textures person” (which, I am reminded I am, every time I proceed to talk about the way a “food feels” for fifteen minutes) then this is the nirvana of pastries. 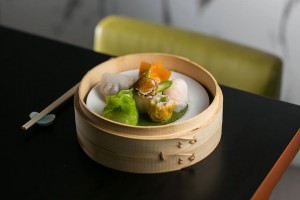 Next was the pork and truffle caviar dumpling, filled with a hot soup. The waiter warned us that this was boiling and to be careful. As I had no idea how to retain the soup filling without letting it squirt across the table, I dipped it three times in soy sauce and hurled it into my mouth. Watering eyes and a burnt tongue later, it was worth it. A real match for this was the next dumpling; the colourful and vibrant carrot and chive shelled dumpling. The truffle taste is fragrant and very present, whilst the texture – since I love this element so much – somewhat a rich, creamy, starchy purée. 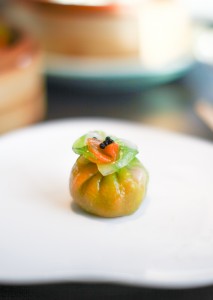 Next in our trio of dumpling tastings, was the black truffle sesame ball – although I couldn’t quite taste the truffle, this dish is best described as a crispy, sesame ball of mashed-potato, and although it doesn’t sound ever so sophisticated, added that feel good satisfaction factor that only Yauatcha dumplings really can.

I hadn’t been holding my breath for the next dish when I had read it on the menu, and was rightfully mistaken; the sea conch soup is so delicate and infuses so many flavours, with soft chunks of chicken at the bottom of the bowl. The broth it wholesome, feel good, and remedial in taste – definitely a new standard for healing “chicken soup” when you’re ill – I’m just not sure who will take me seriously when I order this from my sick bed, but one can always try. 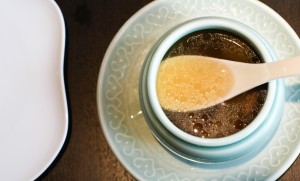 The real plat du jour came in the form of the Asian Salad. Not one to order salads, after my priorities in life shifted from fitting into size 8 Matthew Williamson dresses, to tasting and experiencing different cuisines and cultures, I was speculative as to how I had come to be about to tuck into a salad.. at a Chinese restaurant. Move over Peking Duck; this is the new guilty pleasure of Chinese food. The raw seafood salad, comprising Japanese seaweed, grapefruit, pomegranate, pumpkin and mushrooms, is mixed in and dressed with that sort of all encompassing spot-hitting Asian dressing which I kept fumbling around for a description of and could only really pinpoint as “that Chinese food taste” – I think Chinese food fans will understand here, the rest will just have to try it. The slices of scallop were so soft, they crumbled between our chopsticks and then melted into our mouths. This dish is not to be underestimated, or discarded as “just a salad” – it is pretty much a masterpiece which credits the quality and innovation behind the Chefs at Yauatcha. 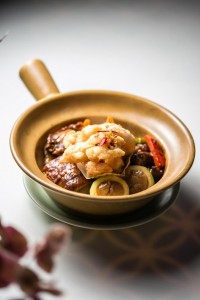 Unable to breathe from polishing clean our last plates, I ignored my body’s warning signs as we were presented with our last dish: the “Hakka Fortune Pot” A jackpot of fortune it very much is – filled with various meats on a bed of vegetables, it infuses, yet again, every trademark taste of Chinese dishes.

Questioning just how much dignity I will need to forfeit in order to make it out of the restaurant on both feet, I disappoint the child in me by asking if I can take away the signature Macarons; I am presented with a beautiful package of Juniper Berry, Orange and Almond, Elderflower and Ginger, Rose and Rosehip, Camomile, and Gin and Tonic with grapefruit (a signature Monkey 47 combination) macarons. 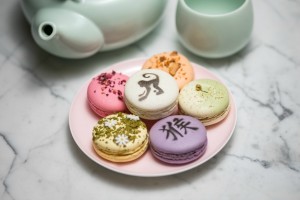 As we leave the impeccable restaurant and tea house, it’s warmth, it’s friendliness, it’s service, with our fill of such an adventurous, creative and palatable menu, it is absolutely no wonder to me that Yauatcha earned it’s first Michelin star within a year of opening; it seems to me, it could have had earned one in a day.

The Chinese New Year menu will be running at Yauatcha Soho and Yauatcha City until 20th February 2016; but watch out for some of the dishes, I’ve been advised that they occasionally make it onto the menu, throughout the seasons!