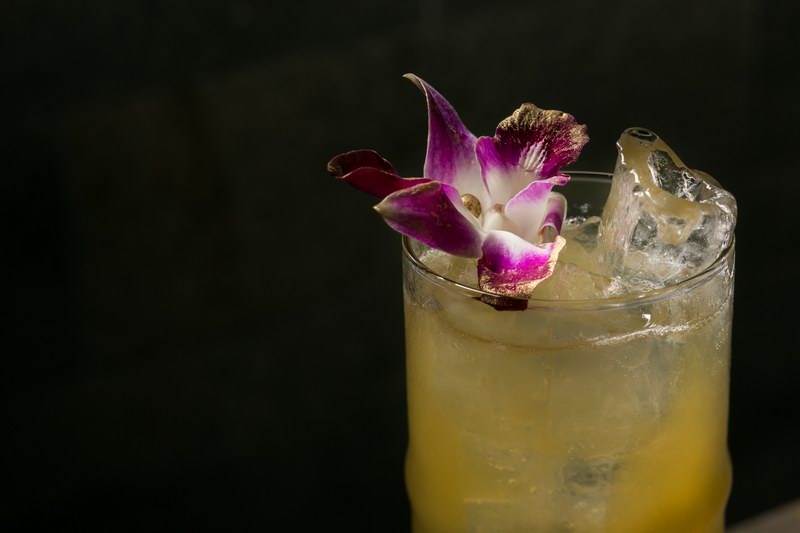 In celebration of China’s annual Golden Week, the Hakkasan restaurants celebrated in their expert style, through the launch of a Golden Week menu. As you guessed: everything is laced with gold. The menu offered a tantalising, whimsical welcome to dining at the always bustling restaurants, and welcomed guests to try something different if visiting for a light taste of Hakkasan’s specialties, or even to precede an evening of fine dining from the a la carte.

The limited edition signature menu was on offer at Hakkasan Hanway place, and our favourite of the branches, Hakkasan Mayfair. Offering supreme dim sum platters marrying all the richest and most exquisite fillings for your dumpling cravings; dover sole with black truffle, lobster and lychee, to an extended offering at Hanway place including stir fried Canadian Lobster, wok-fried  rib-eye beef, and stone bass lion head – there was something for every curious palette.

After heading down a spotlit staircase that recreates the mesmerising impression of sunlight hitting a clear blue ocean floor, we were heralded by welcoming staff in turquoise uniform into the sudden buzz of a dimly lit, packed restaurant.

Greeted at our table by the charming, sincere restaurant manager; Aurelien, I knew we were in safe hands. What is wonderful to observe is the equally special treatment afforded to all guests, as I noticed him pass by tables and check in on his guests, lightly joking, and enticing his guests in conversation, perhaps in equal competition to the food and drink itself. I have been in equally busy, high end restaurants, ignored for upward of 15 minutes after being seated, and then given resentful nods for having the audacity to stop a rushing waiter in his tracks to ask for a menu. None of that at Hakkasan; golden week or not, you can tell from the relaxed, reclined, and enthused guests, that their dining experience is to be taken at their pace.

We started off with the the signature cocktail, the Golden Iced Tea; an exotic (and more gold) twist on it’s long island variation, and we were also treated to some additional dishes to compliment the Golden Week menu.

We opened the meal with a refreshing duck salad; the roasted, crispy meat was mixed within a bed of crunchy leaves, pine nuts and sour grapefruit which allowed for a tangy edge to the sweetly flavoured duck. 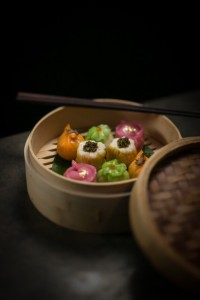 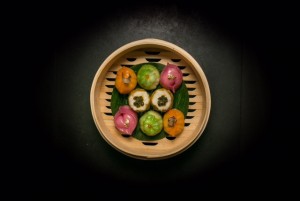 Next, the supreme dim sum platter compromised a quartet of dumpling creations. The first enveloped within it succulent and sweet Alaskan king crab, making for a satisfactorily rich, filling and meaty dumpling. Another of the handcrafted pieces, named Abalone shu mai, was garnished with black caviar which signposted a tasty minced fish interior. The final dumpling had a gold leaf crown and offered the immediately identifiable intense tang of lobster meat with a fruit-like twist, with the innovative addition of lychee. 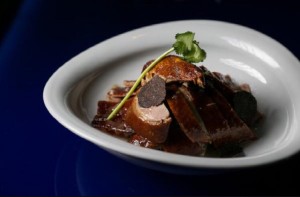 The smell of the penultimate dish preceded it’s arrival: the distinctive black truffle scent. Generously large pieces of tenderly cooked duck with a crispy, golden coating were obliquely cut upon a bed of tea plant mushrooms. The surrounding sea of black truffle marinade provided the perfect compliment of intense flavour to the richness of the meat. 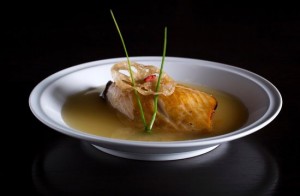 The culinary crown of the evening, however, was undoubtedly awarded to the next dish – outta the way black cod – the so-called silver cod at Hakkasan, baked in a honey and champagne sauce, is the royal family of cod dishes. This glistening white fish was so moist that it naturally fell into soft pieces seamlessly held together within a golden coat of honey glaze. The real kick behind the unique adaptation of this dish was the velvety champagne sauce which soaked and surrounded a worthy centre-piece.

To end we were treated to the Golden Week’s sign-off which the Hakkasan are so befamed for. Their macarons. I want to take a moment to pay homage to the only dessert, which has ever led me to call up a restaurant once I’ve returned home, and attempt to ask anonymously whether it can be ordered to take away. Such is the addictive, moreish impact of Hakkasan’s macarons. The honeycomb-flavoured creations are covered in gold leaf and filled with an ice-cream textured, chilled, honeycomb ganache. They are made to perfection and I seriously considered eating all five, but settled for a three-two split between myself and my company, with zero added guilt.