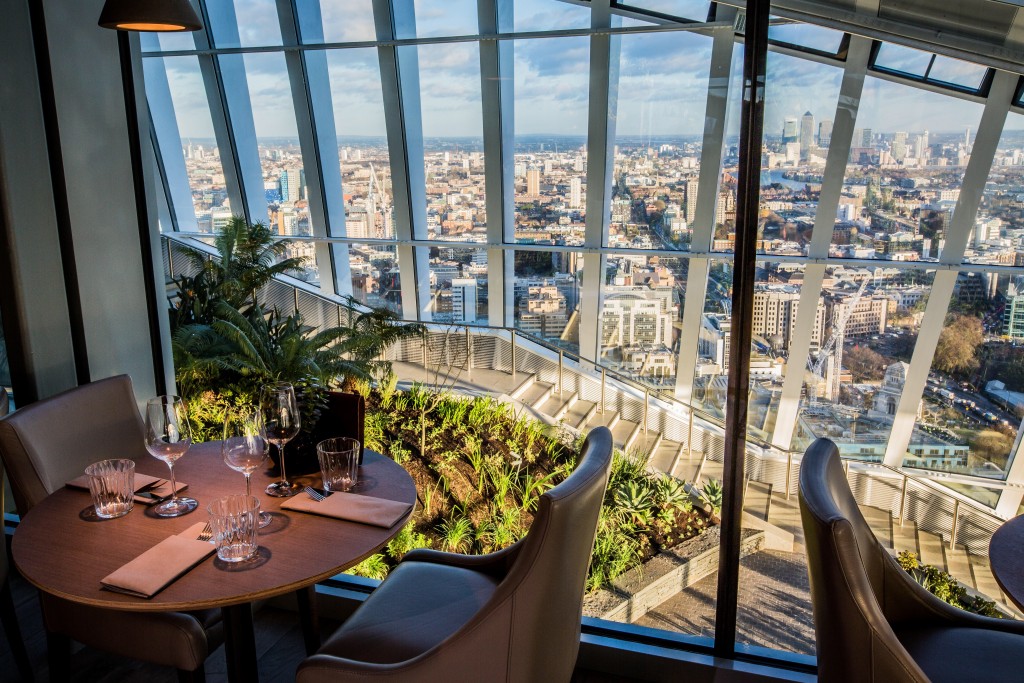 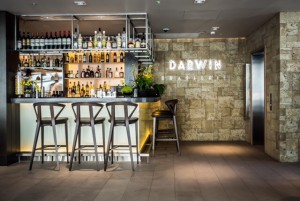 The Darwin Brasserie, set within the Sky Garden and its stunning view, offers a light, relaxed, charming dining ambiance in this huge conservatory in the sky.

As I walked into the 35th floor where the Sky Garden is based, it immediately struck a resemblance to a huge conference hall; the type which have huge stools that no one can ever reach, at round tables dotted around an empty room, with open-plan cafeterias selling bottled water at £3 and sandwiches at the rough cost of a fillet of steak. I used to see several of these when my father would attend exhibitions and I would occupy myself as a seven year old, by charming my way into gift bags and goodies from each of the stands. The déjà vu was overwhelming. Exhibition centre interior aside, one thing I did not remember was the miniature city which lay ahead. Looking out at London from this height, is really breath taking, coming from a serial-rooftopper-turned-rooftop-cynic, since the world and its wife in blogger populations seem to amass every good rooftop which London has to offer.

Telescopes surround the room and the terrace outside affords you a 360 degree view of the city – in detail. Most rooftop views are uninterrupted. The Sky Garden leaves no corner of London unturned. I had only a few minutes to stop and gawk, since, per usual, I was late. I climbed a few stairs, following instruction from the hostess who was dressed a-la-Narnia in a huge fur black coat (in August). I turned left, and was greeted by the only choice of a downward staircase. I descended, thinking “this can’t be right”, only to have my suspicions confirmed as I reached square one. The Darwin Brasserie is tucked away, and can be reached by a tucked away elevator on the 35th floor, whose doors open into the restaurant, so to my relief, there was no more getting lost once I was in the lift. As such, the brasserie hovers over the entire conservatory; looking down from its tall glass windows you see first the interior of the sky garden with all its wanderers, and then cast your glance further yet for the city skyline. The views are, yet again, breathtaking at this level. 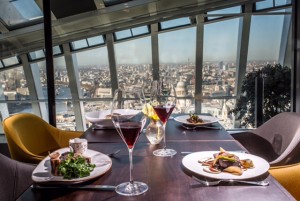 We were there for breakfast, and, as extensive as the menu at the brasserie is, I still found a way to ask for something that wasn’t on it: avocados. Testament to the attentive and dedicated team however, was their mad rush for the next 15 minutes to source avocado from one of the neighbouring restaurants in the sky garden. We ordered a full English each, which is served plentifully, at slightly steeper prices than street-level restaurants, but of course, this is to be expected when your breakfast-time eye candy is “all of London.” Where the eggs and bacon don’t break any culinary records; the brûlée certainly does. It was like dessert at breakfast time, and there was a certain charm which accompanied nibbling on something sweet as we kicked back and gazed ahead at the wonders beyond.

With such friendly service – especially at this time on a Saturday morning – such light, and such a feeling of flight above the city, The Darwin Brasserie is one of the most charming ways to start your weekend. Once you’ve taken in so much of the city by sight, all that’s left is an overwhelming desire to go out and conquer it.