#Life has the privilege of reviewing many, many world-wide destinations. However, right on our doorstep, is on of our favourite cities globally; the charming, fairytale, Istanbul. #Life brings you a quick, tourist’s guide to the most lavish top picks for a weekend break to the city I like to call “Agrabbah”

“It’s like a mini-Agrabbah” I breathed in, looking on out of the tall bay windows of our penthouse suite. Coloured blocks of pale yellows, oranges, pinks and reds piled up above one another, in a city that seemed so built up, yet so uncrowded. We’d walked down a questionably winding, cobbled road, that seemed to descend away from the better looking streets we’d spotted in the Taksim area. The recently opened Rixos Taksim, hexagonally roofed, stood nestled at the bottom of the road, and promised to offer the same private, seamless, luxury stay as it’s well-known sister hotel in the nearby Pera area.

We hadn’t been told to prepare ourselves for the most privileged stay imaginable in Turkey – the Rixos Taksim gives you a fresh take on simple, unadulterated, elegance, and a new lease on the term ‘city break.’ Our four day bubble of basking in relaxation and comfort, all the while soaking up Istanbul’s rich culture, was definitely: ‘a break’.

The Layali restaurant gives you the most outstanding flavours of Lebanese cuisine, the SPA centre offers treatments which infuse the tailored massages and body care rituals of the western and eastern cultures which Istanbul’s character combines so seamlessly. The indoor pool, more adequately sized to represent a river, the state of the art fitness centre, with inbuilt speech systems, that make it impossible to resent the treadmill, 24/7 concierge services, and a stunning roof-top view (which took us a while, and tens of emergency doors to sneak through, to find) make the hotel an abyss of understated luxury. The personal relation each member of the hotel management will adopt with each guest, made me wander if we were the only guests, despite the hotel being a full-house during our stay.

Topkapi Palace: Home and Harem of the Sultans.

The Blue Mosque: Not as overtly “Blue” as you’d expect – Turkey, and Islam’s most beautiful, intricate Mosque, is a must visit, for silenced stupor at the ornateness of this early 17th Century hub of worship.

The Aya Sofia: The Hagia Sofia re-pivoted Western Architecture thus forward. Intended, and succeeding as, The Greatest Church in History, it was built by Emperor Justinian in 537 AD. However it’s status as the worlds greatest piece of architecture attracted invasion by Mehmet the Conqueror, and after almost 1000 as a Church, was proclaimed a Mosque. 400 years later, it was finally recognised as a world-historical monument, and proclaimed a museum and heritage point by Ataturk. A must see, it is awe-inspiring poise and beauty. 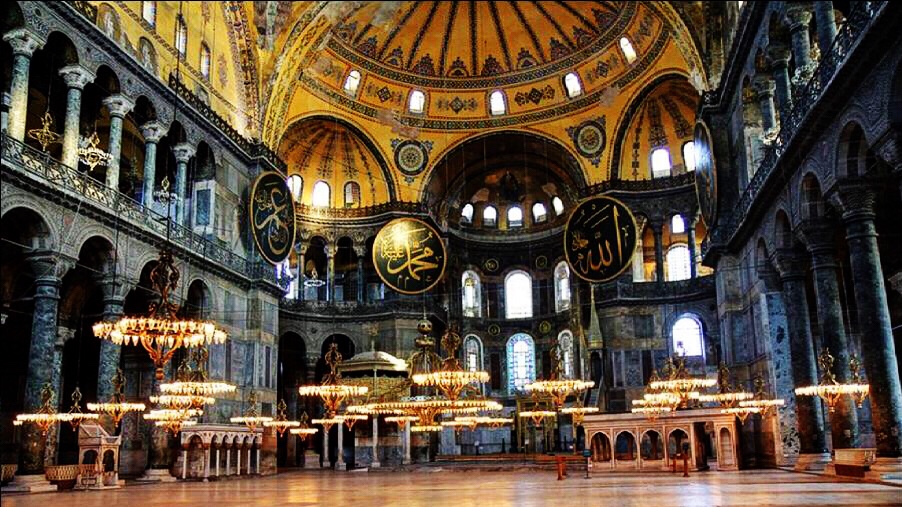 The Basillica Cistern: Also known as the “Sunken Palace” or more famously for that Bond scene in From Russia With Love as 007 rows through a forest of marble columns. That adrenaline packed scene can be located at this underground Cistern built by Justinian as water store for the Great Palace, in the year 532.

The Prince’s Islands: The charming 9 Islands scattered about 20 km southeast of the City in the Sea of Marmara, make for a beautiful scenic day escape, for added tranquility and culture. The Buyukada Island (The Great Island) a stunning setting as you approach by ferry of gingerbread type villas inviting you to climb up the slopes of hills and bulbous twin cupolas of the famous Splendid Otel   for a view which leaves you catching your breath at it’s beauty, is a must.

Getting in with the Locals: Women, be prepared to fall subject to cheesy charm such as “excuse me you dropped something.” Don’t stop and look for your lost object, as your admirer will shortly let you know – its “my heart”.

Regardless of your attractions however, do not be surprised if stopping and speaking to a local in a Spice Souk, or a silversmith in the Grand Bazaar in Sultanahmet, earns you an invitation to dine with their family that evening. Walking the streets of the Sultanahmet area, friendly chats with the cab drivers, or passing pedestrians, will transfer a certain warmth that Istanbul is charmed with.

The Egyptian Spice Market had us exploring the intricate smells, tastes and textures of the 101 spices to be found in this alluring setting. Fleeing the flirtations of the Spice Marketers however, had us stumble upon Istanbul’s greatest invisible hand: The Grand Bazaar. And grand it was.

Several times, I will roll my eyes at the Sex in the City type running narrative that occurs in my head. Fewer times, does that narrative manage to manifest itself in full glory into actual happenings. Our visit to the Grand Bazar, was one of those occasions. The boys were certain it was their moral obligation to accompany and protect us from the stalls-men – and – worst of all – ourselves and our credit limits. They gave up after an hour of trailing, and told us they’d meet us back at the hotel. Another hour and one of the girls buckled and called it a wrap for the day. Myself, and my colleague Roshan, were still going strong. Two further hours later, climbing up upward slopes of cobbled roads, past winding, packed, paths of shop after shop, there we were: stilettos slipping between cobbles, as we dragged behind us the suitcases we’d bought from the Bazar, filled with the merchandise we’d bargained our way into purchasing at the Bazar. As truly Carrie Bradshaw a moment as it was, they don’t ever seem to show the post-purchase uphill haul and struggle of reality, in the movies!

Cutting edge, diversified live entertainment, spectacular 360 degree views, an outstretched terrace overlooking Istanbul and a highly creative menu of culinary delights. The award-winning penthouse turns into club-360 on weekends, with international DJs, impressive acrobats and live dancers. Its sister venue 360 East recently opened on the Asian side of the city, with matching jaw-dropping views, adding the swanky twist of a roof-top pool amongst outdoor terraces.

Find sunset in the impressive Ulus neighbourhood, set upon a hilltop with yet even further breathtaking views of the city. Awe-inspiring scenery, exquisite service, possibly the most extensive international wine list, cigar selections, and the finest cuisine – a melange of Japanese and culturally influenced Turkish menus – as well as live music made Sunset our top pick in the city.

Reina Club – Istanbuls most glamourous, super-flash club, as you dance your evening away on the banks of the Bosphorous. Yes, technically, you can avoid traffic, by arriving at the club by boat! Spanning two large floors which stretch out on the Bosphorous, the club is Istanbul’s most beamed, and a must-visit for one, if not several of your nights.

Visit Lucca Club to expand your horizon further across the Bosphorous, as well as up Istanbul’s social ladder. A restaurant by day, club by night, and heart of Bebek’s bar and club scene at all times, follow the yellow brick road of Porches to find this magnet for Istanbul’s high society.