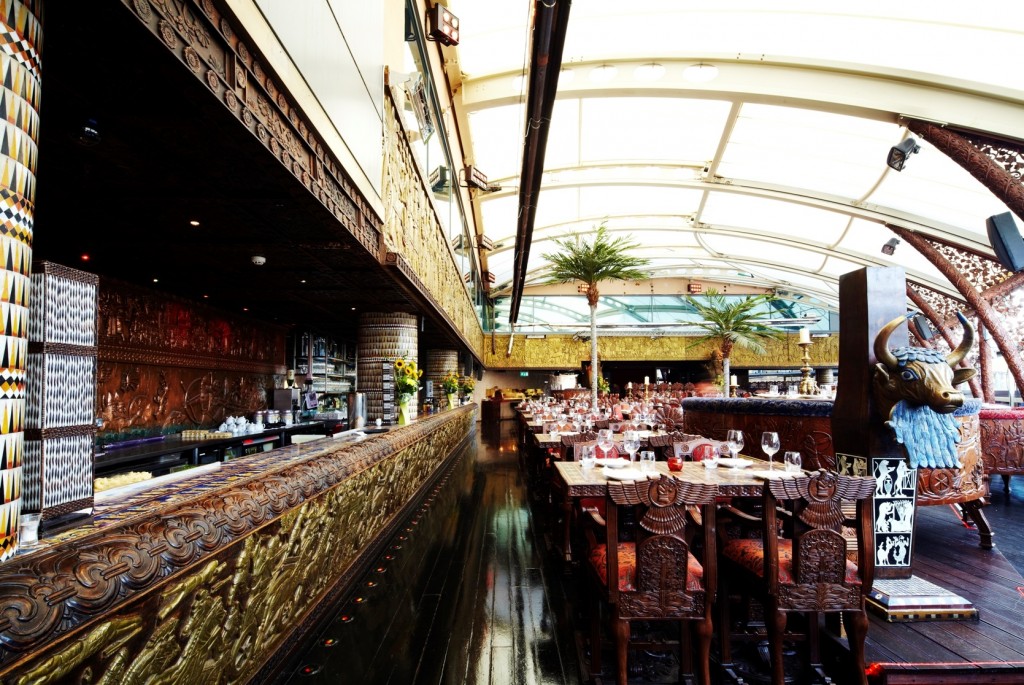 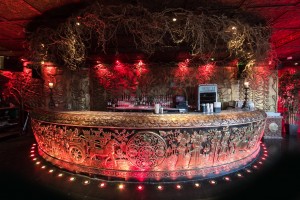 The last time I had been to the Gilgamesh I’d been fighting back tears of fury from falling into my duck and watermelon salad. My boyfriend at the time had screened six “work calls” which we both knew were no work calls. I ate my duck in silence, thinking about how I was more furious that my favourite dish at my favourite restaurant had been ruined. Taking it back in time a little, the Gilgamesh has always been to me, the place of good food, fun and frolics. After constantly publicizing my visits there, a friend had decided to recruit my help in hosting her 21st birthday there. Hire out the Gilgamesh? No problem! I put my money where my mouth was and fired across 400 emails to the marketing manager at the time, bartering the hiring of their grand room, which transforms into their club on weekends, with signature Gilgamesh small-plates, a DJ, and no minimum spend. When my friend had arrived to pay the student-budget sized deposit I had managed to negotiate, he had greeted her with the words “are you Joanna?” when she’d said she was not, he’d sighed in relief and simply said “boy, she’s good.” The night was a huge success, we were treated like royalty and had felt it too, as we’d flitted from their large booth-like tables, their giant wooden swings, and in-room bar for a night to give Cinderella a run for her money.

So marching back up to the reception desk on my recent visit, I was half expecting someone to at least say “not you again.” Unfortunately, I am not infamous at the Gilgamesh quite yet, but I would like to think I’m on my way. “May I take that for you madam?” The gentleman asked, nodding toward the giant monopoly board I was carrying under my arm. “No thank you, I’d like to keep this.” If there was one thing I remembered about the Gilgamesh, it was that every seat was a throne. And I wasn’t mistaken. We were led through the stage-set tables to a large circular booth set a few steps above the rest of the floor. My inner child sized up the table in pure glee as I calculated it to be more than enough space for a monopoly board and the 18 plates (each) I’d pre-planned to order whilst salivating over the menu all day. 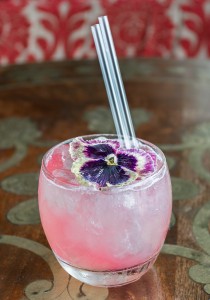 Through strenuous negotiations, peace talks, and promises that if I forfeited a few plate choices, I could have more of each plate for myself, we narrowed the list down. As an ode to the plates which didn’t make the cut, I feel I ought to list that I shall be coming back for; the crispy chicken wings with kimche glaze and crispy garlic, the wagyu beef tartare with chives, tobiko and crunchy lotus, the crispy squid and banana shallots, the crispy black cod dim sum with mango sauce, (it’s a very crispy menu), the scallop siu mai dumplings, the soft shell crab and lemon sole tempura – I find myself feeling conned that I was talked out of all of these. However it is off-set by the plates we did tuck into. Re-united with my duck and watermelon salad, I was happy once more. This refreshing, hydrating, tasty dish has you savoring the crisp duck against the cool watermelon all in one mouthful, even if it did come with enough mint to plant a mint-tree-forest. As with all true torn food-orderers, we had dragged Reece, the wonderful manager, into our decision, after asking him to “come back in two” about 6 times. There is the old saying that if you’re torn between two choices, toss a coin. Whilst it’s in the air, you’ll realise what you’re hoping for. This is certainly true when it comes to my ordering. I ask him what he thinks of the stuffed squid, crunchy quinoa and chive sushi roll and he is refreshingly honest, advising that it’s not the best plate for flavor. I nod with concentration and then order it anyway.

Reece was right, as we found ourselves trying to do the maths over how this combination of ingredients could add up to anything less than an explosion of tastes in our mouths. Instead, it is neither here nor there, and beside it’s competing dishes, offered little value for taste. This was entirely offset and quickly forgotten with zesty plates like the Seabass ‘house ceviche’ with avocado (which, under the subheading of ‘sushi’ had me momentarily wandering if my ceviche would come wrapped in rice and seaweed – I’m please to report it did not). The black cod, is teasingly glazed, and wrapped in a lightly fried kataify pastry, and I am still dreaming of it today. Possibly the best sushi dish I have had, as bold a claim as this might be, was the Spider Tempura; crispy jumbo crab, campio, asparagus, daikon and soya glaze. It translates into a slightly sweet, soft meat, in a lightly fried shell, wrapped around the crunch of asparagus and complimentary glaze, to perfect every single mouthful you take. I dare you not to eat all 5 rolls in one go, after trying your first.

You’re probably wandering when I plan on moving on from my never ending list of starters – I should’ve thought of this too as it was time to order mains; a concept which seemed absolutely foreign to me when the waiter asked us if we were ready. I had completely forgotten about the mains! The next ten minutes were spent dragging him into our indecision again, as we debated whether we could stretch our stomachs for one main each. We sadly chose to survive instead, and opted for the BBQ Lamb Cutlets alone, although our beady eyes had been on the Beef Bulgogi – slow roasted short ribs with bulgogi sauce. 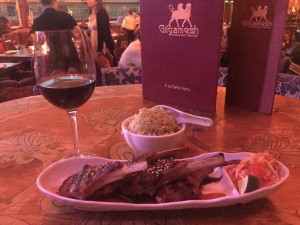 When the lamb arrived, we looked at the four little chops before us and both thought “we should’ve ordered a second plate.” What we didn’t know, was that we should’ve ordered a second plate of this. sI like to think of myself as a sharer, but I have never felt more robbed than of the two lamb cutlets which I didn’t eat – glazes with the jus of the lamb itself, pink, juicy, soft and tender to the bite, served with a palette-balancing mango thai basil and crispy shallot, each bite simply melted into our mouths. I doubt I have ever tried lamb so succulent and moreish – so much so that as I took one look at my dinner companion I saw him cheekily holding up the spangled, skinny semblance of a bone that remained. All traces of meat had vanished. We paired the lamb with green rice, in a pitiful attempt to be – well, green – which is served stir-fried with thai basil, coriander, ginger, sesame oil, and (drum-roll please) crispy quinoa. At this stage, the monopoly board made sudden sense, as we took a much-needed time out to sit back, take in the cool, relaxed, pan-asian surroundings and unwind before dessert. 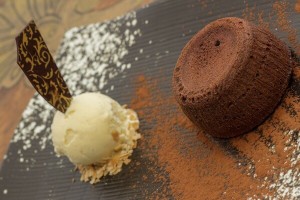 Egging the wonderful team to join in on the game (largely because I needed strength in numbers as I found myself losing), I was reminded why I am besotted by the Gilgamesh and all its charm. I am always mesmerized by the beautiful opulent interior and the 40ft high ceiling and retractable roof, carved wooden chairs, which I view rather as thrones and its lounge-like setting, in this Babylonian-style palace. As I softened the blow of my monopoly-loss with the warm, oozing chocolate fondant and vanilla ice-cream dessert, I pondered over what this palace represents: the carved wooden interiors, the palms and conservatory-like settings, the tall glass windows before outstretched views of the city, the huge wooden swings I’m so adamantly a fan of, the cool, hidden champagne-bar with early 1900’s décor, tucked away from the restaurant – these are a few of my favourite things – where the adventurer in me, meets the foodie in me, and I step into a wanderlust of my very own board-game, if you will.

Contact reservations@gilgameshbar.com for dinner reservations. Step into the Gilgamesh Club on weekends for the stylish and unique nightlife experience. Unwind in the chic Lounge Bar or Champagne Bar 7 days a week. Plan special events and private hires with the experienced, sophisticated team on board: info@gilgameshbar.com