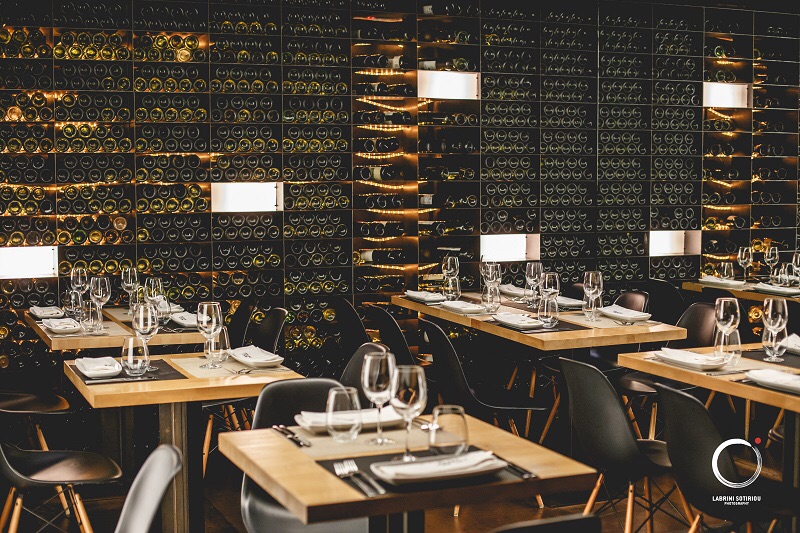 “My google maps says we’re here.”
My friend Mikhaila had decided to ignore me, as I’d repeated this several times and we clearly weren’t “there” yet. We were searching for Scala Vinoteca; winery as the name suggestions, and restaurant of spectacular promise, as the rumours have gone.
All we had found was a kiosk standing where the restaurant should have been, and no other possibilities immediately next to it.
Then we thought, “what if it’s…” ah yes, “up”. 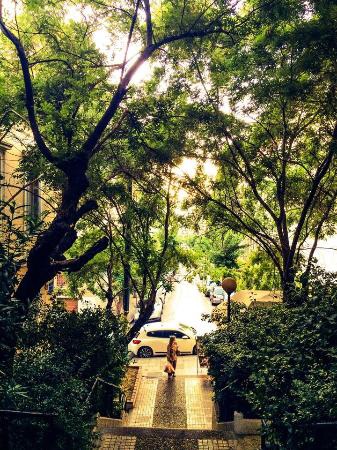 As with most places in Athens, if you look up, that’s where the magic happens. In the middle of streets on the pavement, you will find sets of stairs leading up hill, to a “first floor” of cafes and restaurants, walk up hill via more steps carved into the slopes of the streets and you’ll find a second floor, and so the streets of Athens continue with their various dimensions. Who said roads were made to be flat? The Romans? Well they hadn’t seen the Greek way of carving out pathways of wonder yet. I could walk these streets for years, and never feel weary or full. Every road winds onward and upward to some architectural delight, or song of culture. Scala Vinoteca, falls into the latter. I had been eager to revisit since we had met friends for a drink there last year. I was in Athens with my sister, who survives on about 70 minutes of sleep when in this city. I do not. So, exhausted, having spent most of the night before propping my eyelids open until 6 in the morning, and the next day walking up the aforementioned uphill slopes of this city, I was in utter relief at the prospect of two things: tapas and wine. We arrived late, and gone was the eating portion of the evening, and our friends invited us to the remainder of their bottle of wine. No R&R for me. So on my next visit to Athens, Scala was first on my list for a relaxed, long evening.
We were overwhelmed as soon as we entered Scala, not too visible from the flight of street-steps that lead up to it, the light installation that leads you there is as subtle as the exuberant understatement found in the interior. One wall is plain. To the right is the entrance with outdoor seating; the wall opposite it is made up entirely of empty glass bottles aligned in row after row of the green and yellow hues set by the glass, the last wall beholds a floor length mirror giving the room the effect of double its size. I genuinely thought for 15 minutes flat, that there was another set of 8 tables beyond us. It was only when I recognised the sheepish grin on a girl’s face, four tables down across the room, that I realised I was staring at my own reflection, and had been nosing on our neighbours table, squinting to identify what they had ordered, when I really didn’t need to look that far after all. Smart, Joanna, very smart.
We were greeted by Panos Nikiforou, the restaurant manager and Dimitris Kontopolos, the mastermind Chef behind Scala, who I instantly appreciate is not much of a talker, as made evident by his perplexed reaction to my nonstop chatter. They  run through their top picks of the dishes with us, and set us up for the meal ahead. I can barely wait. We started off with the sweet potato and truffle oil which was sweet and homely. The truffle oil scents and perfumes it well, is not overbearing or powerful, and just warm enough. Accompanied with a glass of prosecco as an appetiser, it is the perfect setting to start off the meal. The lit walls with the used wine bottles and the architecture of the interior is edgy and comfortable – simple and relaxed.
Too early to label it as such, but pretty certain it would be come my favourite dish, was the avocado roll with white and red quinoa. I was so pleased as at Scala, they are perhaps the first people to pronounce it as I do, so I exclaimed, “yes, I will absolutely try the kin-oh-ah” and nodded my head in appreciation that those who pronounce foods differently, must taste them differently too, and to a superior level of appreciation at that. I was not disappointed. With a slice of grapefruit laid atop the expertly sliced and curled, cool, soft, avocado, accompanied with minced crab and tuna, and a tangerine paste accompanying the “kin-oh-ah” this is a sweet, succulent, creative chilled dish, which harmonised so well in my mouth, that in my voice notes of the meal there is about a 45-second silence during which I think I was whisked into an other worldly experience whilst savouring this dish. I am as much a fan of mushy guac-resembling-avocado as the next person, however this is ripe, and tough enough to form the perfect roll for the crab and tuna. I wanted more sir, please! But just as I was about to make a passive joke suggesting this, they uttered the word: croquettes. Panos introduced it as “the best seller” the Chef later called it “not so pretty, but very good” which sounded sort of how a father would present his least attractive but favourite daughter. These langoustine croquettes could certainly be my favourite daughter any day. To quote my dining companion: this was one of those dishes you bite into, you taste, it tastes great, and then… it gets better! Served on a bed of sour cream and yoghurt, these crab croquettes are far from simple, with a creamy, powerful taste that hits the spot. 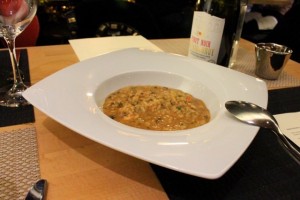 Our dishes were paired with wine varieties galore – a Greek, raspberry infused, buttery Sauvignon Blanc for the croquettes, followed by a Pinot Noir, which for the rest of the evening we kept reaching back for, regardless of what pairings were presented, until the restaurant manager gave up and just brought us the bottle. Hint well taken, I say. With peach, vanilla and white blossom infusions, this Pinot Noir is a captivator for the evening – drink it with  what ever you can. That is exactly what we did; with the chargrilled Calamari, succulent, soft and juicy as well as the Langoustine Risotto; the crab tastes so fresh you fear it has just been plucked from the sea and very possibly still alive, in the rich, creamy bed of porcini risotto. 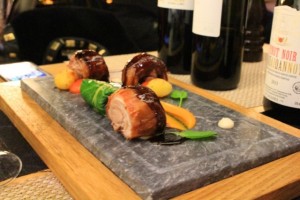 For mains you must absolutely try the the lamb, marinated for 18 hours, with star anise and caramel glaze. We understood that at some point, we had to stop eating; the sort of semblance to a relationship you know must come to an end, but you just don’t want to let go. So reluctantly, we closed with the Chocolate Swirl dessert, a sumptuous sweet close to a brilliant meal. 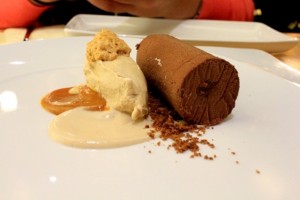 The clock had struck twelve, and most diners had begun to wrap up their meals. Testament to how much you will not want to leave this place is the fact that a lady on the table behind us had unfortunately chocked on something quite early on in her meal (which I had interpreted at my cue to calm down and eat slowly, as tempting as it was to devour everything all at once). After much attentiveness and care from the staff at Scala however, they had continued with their meal, and were the second last table to leave the restaurant after close. We were the last. We didn’t only leave after close; we left two hours after close. The restaurant manager Panos, and Chef Dimitris, pulled up some chairs and sat with us to tell us of their dreams and aspirations for their wonderful little haven which they’ve built of Scala. Unchatty genius Dimitris, even opened up a little, I like to think, as he spoke to my dining companion, and Architect about his dreams for the design of the place, whilst chatterboxes Panos and I covered their plans for expansion. I left with that buzz that you feel after an annual family Christmas dinner; it is packed, it is hearty, it is unique, yet saddening all at once as you tell yourself you wish you could do this every day. This is how you will feel on leaving Scala Vinoteca; you will wish you could be there, every day. 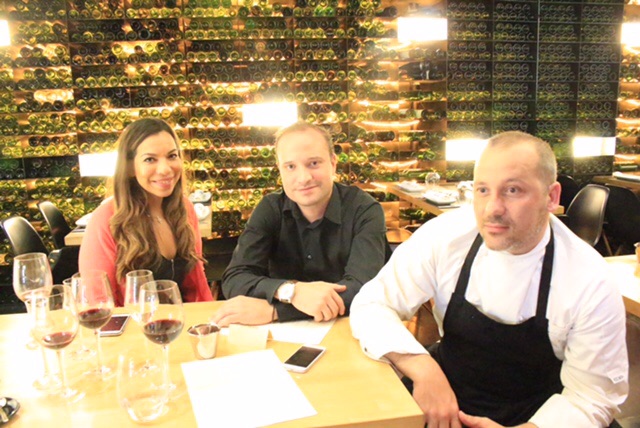