Hashtag Life, in collaboration with Great British Racing, visited spectacular Newmarket for a day at the races, and to learn about InThePaddock.co.uk – the new site bringing accessible, affordable race-horse ownership to all.

Growing up, I always wanted to learn to horse ride. A quintessentially British sport and pastime, there was effortless elegance to it, which mirrors that of the equestrian beauties we celebrate so fondly in the UK. So it was with great pleasure that I joined Great British Racing this April to visit Newmarket, home to the largest cluster of training yards in the country, with the trip including an evening at Tattersalls to bid on some of the country’s most promising young horses, and a day at the racecourse from a VIP hospitality box. What’s more was learning that such an experience, which I am all too eager to repeat, is far more accessible than I would have imagined. So here is a run down for novices or curious fans like me, on how to step into the beautiful and enticing world of the races. Arriving at Newmarket is a hop skip and a jump, an hour and a half’s drive, or two short train-rides away from London. We checked into the Bedford Lodge Hotel with the charm and character of a country house offering modern comfort and luxury – and beds that feel like clouds, I would go back for the beds alone! More importantly however, it is set in three acres of secluded gardens and adjacent to some of the most famous paddocks and training stables in the world, and I was fortunate enough to have a beautiful view of the stables from my room where I could peak at the horses rearing their heads to say hello. Already an exceptional experience, I was excited for what lay ahead that afternoon – a visit to the world renowned bloodstock auctioneer, Tattersalls.

Stepping onto the grounds here is magical. From the moment we arrived it felt as though we had been transported into another, and an older, world. Founded in 1766 by Richard Tattersall, Tattersalls is the oldest bloodstock auctioneer in the world and the largest in Europe. Today, Tattersalls is an international firm offering 10,000 thoroughbred horses for sale each year at 15 sales in either its Newmarket headquarters in England, or at Fairyhouse, just outside Dublin in Ireland. Whether they are seeking Classic winners, Champion two year olds, legendary foundation mares or Champion National Hunt performers, this is where some of the world’s most experienced buyers, owners and agents come to scout and compete for breeding stock, foals, and yearlings who they hope to raise into their future winners. 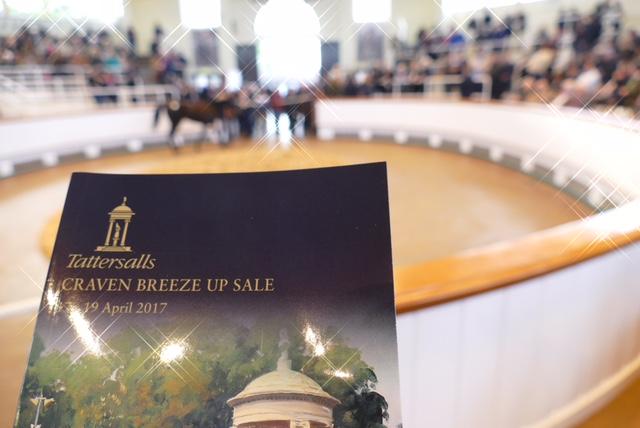 The auctioning process is an art in itself and we had the pleasure of speaking to both a Tattersalls sales agent and auctioneer, as well as a bloodstock agent, for insight into both ends of the scouting and selective process. After a near brush with walking into the arena via the horse’s entrance, I found the entry path for inexperienced humans and took my place to watch the bedazzling, sophisticated bidding process where buyers indicate to their agents and bidders with mere slights of the hand and subtle nods to raise their bids to a skilled and taunting auctioneer.

We spent the rest of the evening at the fine dining restaurant at Tattersalls taking in the enchanting ambience of the post-auction buzz amongst its seasoned visitors, and I felt right at home in the comfortable, worldly, and exciting atmosphere ahead of the next day’s races. 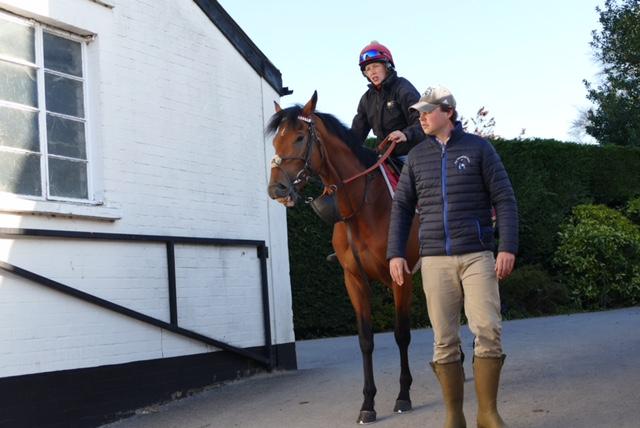 It was an early start the next morning ahead of the races, but this is when the real magic happens, and where I learned about how to get started in race-horse ownership and heard a few stories of the syndicates which are put together for people to do so both easily and affordably. We spent the morning with one of Newmarket’s leading (and youngest) trainers, Charlie Fellowes, at St Gatien Cottage Stables, learning about his incredible story and rise to becoming an in-demand and devoted trainer via a love for the sport which started at the age of just ten. His dedication to achieving experience and seizing opportunities led to him eventually setting up on his own five years ago. As we watched the horses in his care on their morning routines on Newmarket’s renowned “Warren Hill” gallops, we learnt about some of their brilliant records and stories; and of one horse whose owners had chosen to sell but, for Charlie’s love for her, he put together a syndicate to buy her back. I learnt of the love and labour which lies behind owning and training a racehorse.

One really striking story is that of a horse called Tobefair, who is owned by a syndicate on Wales’ south-west coast. The syndicate consists of 17 friends who drink in the same pub, and they bought into the horse for a ‘bit of fun’. The horse – who was once so cheap that he changed hands for nothing – went on to win seven races in a row for his syndicate, earning over £46k in prize money and going on to become favourite in one of the biggest races at the Cheltenham Festival. Although he did not win at Cheltenham, the story of these magnificent horses being one that any interested individual can form a bond with and invest in through this sport, to me, is what makes syndicate ventures a wonderful, accessible introduction to the races, which I would certainly like to learn more about. 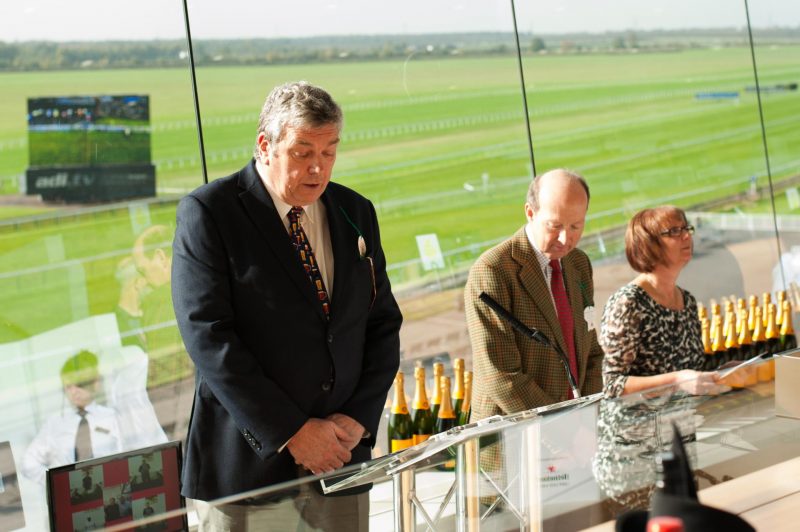 This was cemented further as we visited the races that afternoon and toured the breathtaking grounds before visiting the hospitality box for a three-course lunch and celebratory bubbles ahead of the races. It was here that we started to browse through the programme for the six races ahead and make our selections that I decided to try for beginner’s luck on a few races, and also where I learnt of a new site, InthePaddock.co.uk, which is dedicated to easing the process into racehorse ownership for the more novice investor, highlighting and facilitating the ease and affordability of shared racehorse ownership. InthePaddock.co.uk reinforces what I had been pleasantly surprised with throughout my visit: that racehorse ownership is not just for the elite but is a British pastime accessible to all, even at the highest level. Visitors to the site can search for racing clubs and syndicates that are tailored to them and at a cost that they can afford, with options starting from as little as £100 per share. 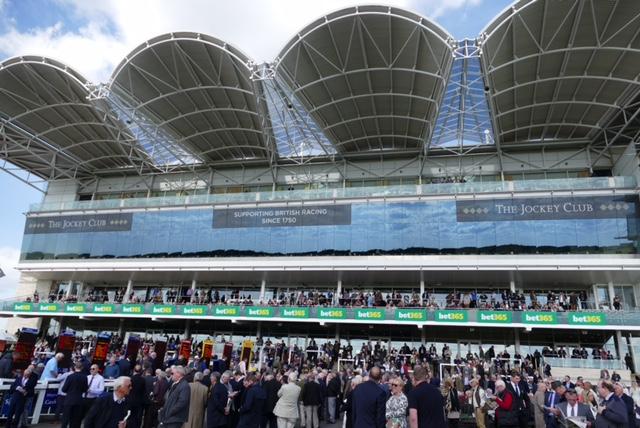 The website offers a wealth of information for interested parties about beginning in racehorse ownership, including a step-by-step guide of key points to consider when thinking about buying as well as putting you in touch with a wealth of blogs and case studies from current syndicates and racing members, whose own experiences you can learn more about. It features more than 60 syndicates and racing clubs, which you can choose from and connect with, tailored by factors such as location, cost, racing types and more. CEO of Great British Racing, our magnificent hosts for the day, Rod Street calls being part of a syndicate or racing club “a brilliant way for race fans to take their love of the sport to the next level.”

As a novice but with a certain interest in learning more on the possibilities behind racing and becoming part of a syndicate, I have been thrilled to learn that the barriers to becoming involved, and lack of information available in the past, are being shifted by GBR and sites such as InthePaddock.co.uk; who wholly encourage you to take those first steps towards following your passion and exploring the possibilities and accessibility of ownership. I know I for one will certainly be learning more from here on out – friends, if you’re reading this, we’re forming a club!

For more information on getting started in racehorse ownership and how to find the perfect shared ownership option for you, please visit InthePaddock.co.uk.