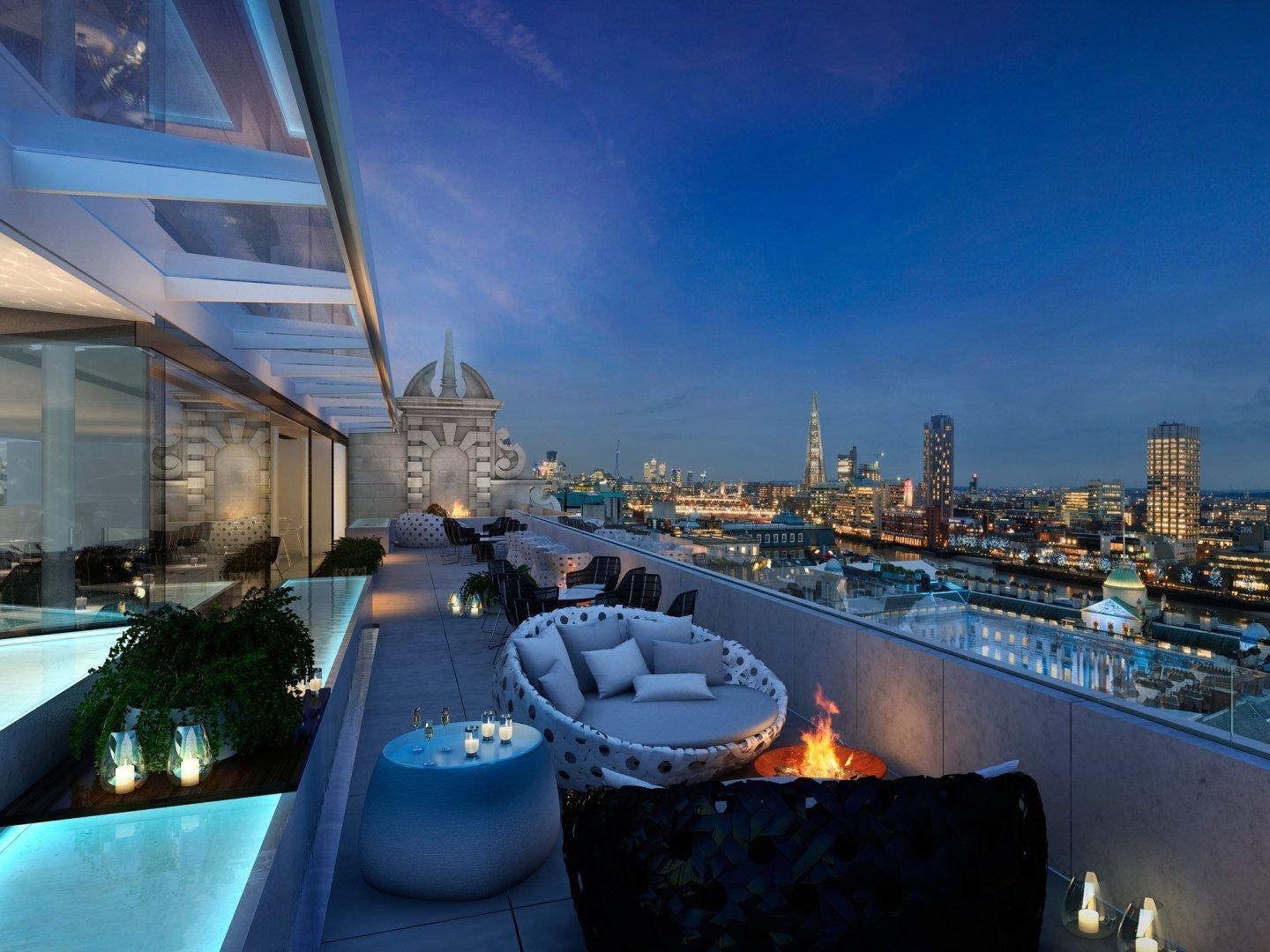 The Radio Rooftop Bar is best described as ‘summer in the sky.’ Rooftop bars always emerge in the summer; they sprout up on any flat surface, 20ft or higher above the ground, which will have them and vary in offering, style, and success. Not the Radio Rooftop Bar – a year round taste of fun, jazziness, and beautiful views is served up at the top of London’s ME hotel along with an eclectic tapas menu that I’ve never really got round to fully sampling because I get stuck reordering their addictive croquettes on loop.

This month, the cycle of addiction was broken, when I was given something new to obsess over at Radio, in the form of their relaunched summer brunch menu and two words which accompanied it: bacon dust. Yes, one of their plates actually comes sprinkled with bacon dust; talk about a tease. 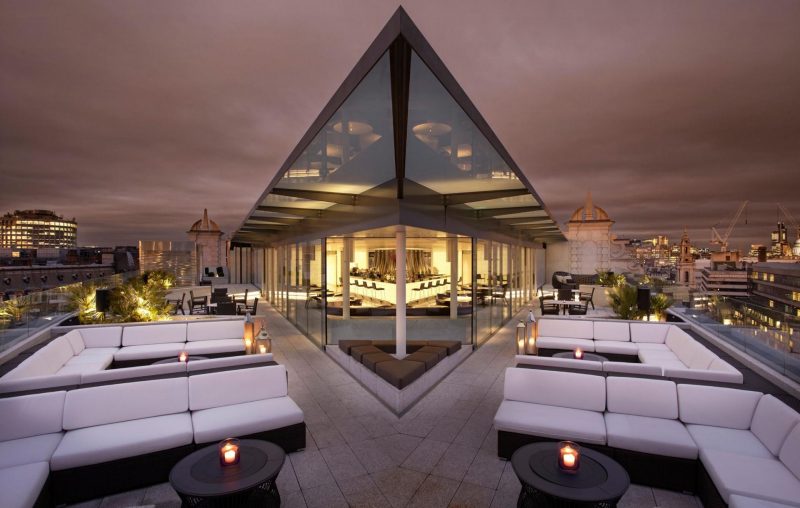 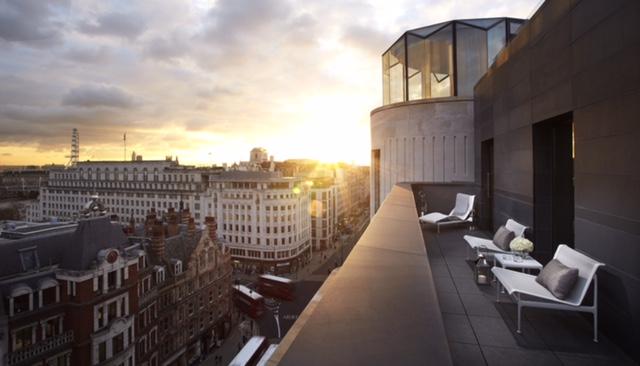 We arrived early, at midday, a time of day in which I’ve never really visited the bar and it was all round much emptier and brighter. I made a mental note to commend my less sober self however for the pretty accurate judgement from late-night visits past, of how sweeping and stunning the skyline views of the city are, even when not lit up, and even if more telling of London’s truly industrial nature.

Early birds catch the worm, or in our case, the best view and we sat back, immaculate iced-coffees in hand to take in the view for a few seconds before doing the customary thing anyone in 2016 London would and putting each others company on pause for a good 15 minutes whilst we took photos and videos. I received my first snap chat tutorial, and I still do not understand it. We spent, unexaggerated, the next 25 minutes trying to narrow down our choice of dishes from the menu to a list acceptable for a.) consumption by less than a party of 5, and b.) to order out loud with a straight face. We tactically decided the savoury dishes could count as our ‘starters and mains’, and anything of a more syrupy variety fell into the dessert category, and everybody knows dessert doesn’t even count. In addition to classics such as ‘huevos benedictos’ (fancy eggs benedict) with potato (mexican style) and truffled hollandaise, or their famous crab omelette with chilli and coriander are new dishes with an indulgent twist on brunch time classics. We ordered the poached eggs laid out on a split open croissant spread with superfood of the Gods, avocado of course, and sprinkled with chilli, lime and coriander. 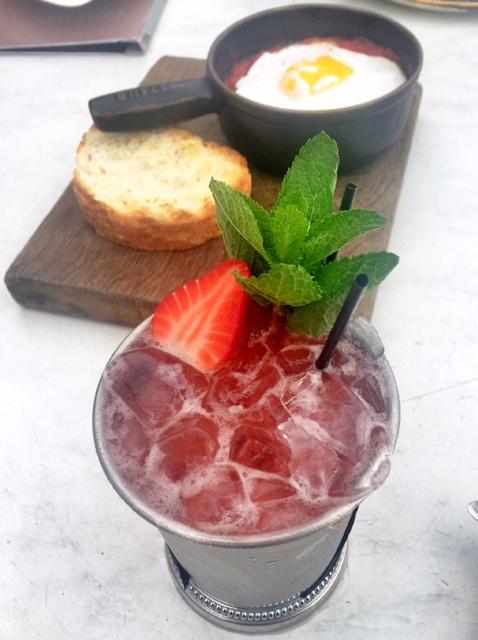 Another addition to the brunch menu is the buttermilk chicken with waffles and maple syrup which we firmly concluded during our operation order less than 20 dishes, was a ‘savoury’ dish despite the maple and waffle factor. We’ve documented the moment we drizzled the maple syrup over the fluffy, golden, just crisp enough waffles and onto the  equally golden fried chicken because this is no ordinary cheat food: the food is so lightly baked, lightly fried, and in-excessive that we completely forgave it of our anti-summer-health-kick sins, before proceeding onto our final savoury dish from the ‘starters and mains’ section of our dedicated afternoon of eating. We finished off with the shakshuka; a middle eastern and Moroccan take on eggs; one fried egg atop a bed of rich,  tangy and spiced tomato and pepper salsa, accompanied by sourdough bread.

With a little siesta in between to digest and prepare (and apologise to) our stomachs for what lay ahead, we finished off with the Ricotta Pancakes with Banana and Honeycomb butter, as well as the French Toast with Mixed Berries. A divine, sweet but balanced, light set of plates, we were stuffed, yes, but feeling relatively guilt-free for the feast we had just indulged. We had eaten until we had to give in: you win, Radio, you win. 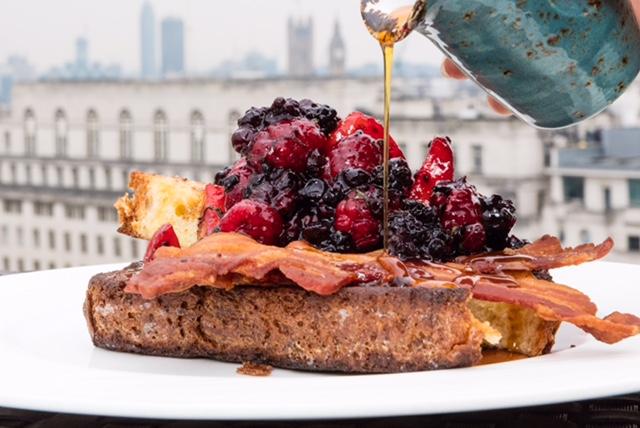 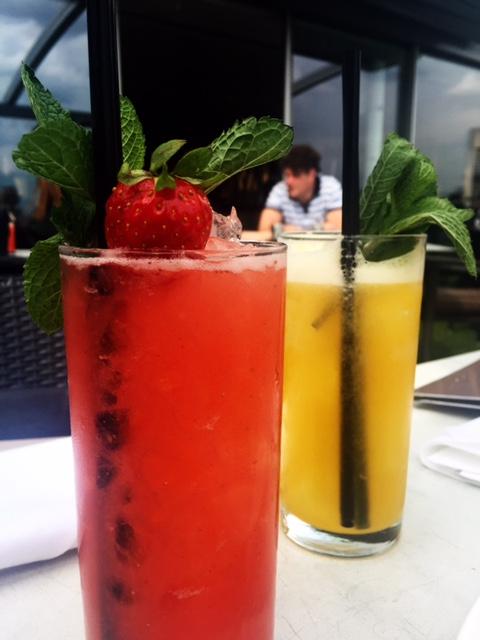 We had spent about 20 minutes photographing everything from the views, to our plates, to the burst of colour from their fruit-based signature cocktails, for every 30 we spent eating. We were there for nigh on four hours. We refused to leave, but knew, eventually, we had to. Looking around, I saw the buzz around us was as energetic and enigmatic as the cool, laid-back, effortless vibe the Radio Rooftop bar embodies by night: the DJ set was already ablaze and gradually getting louder, and groups of girls on catch-ups, romantic dates with the fella looking quite pleased with his choice of venue, and even families had arrived to fill up the buzz on this perfect sunny day. Who needs beach clubs on a summer London day, when you have this? Not the ME hotel, when it’s got Radio Rooftop up in its nest, thats for sure.